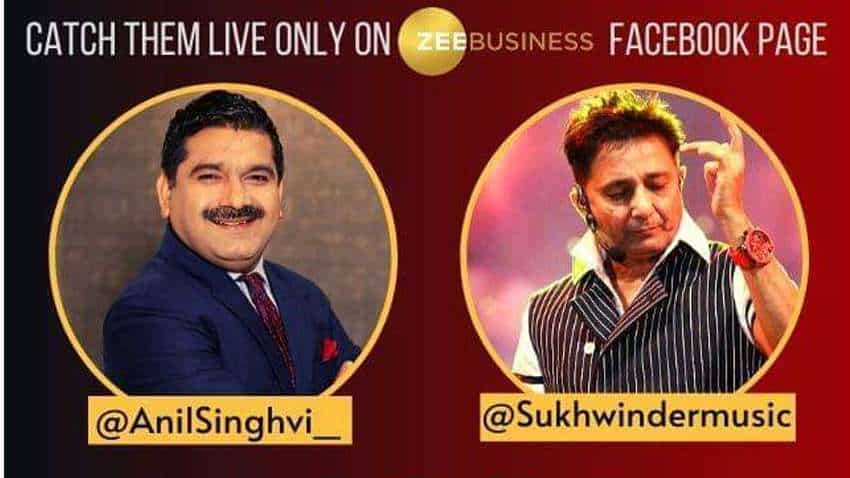 The session, that will be filled with 'music and market', is set to be streamed LIVE on the Facebook page of India's Number 1 business news channel.
Written By: Prashant Singh
RELATED NEWS

Sukhwinder Singh is an Indian singer best known for his work as a Bollywood playback artist. Singh is famous for singing “Chaiyya-Chaiyya” for which he won the Best Male Playback Award at the 1999 Filmfare Awards. The song, from Mani Ratnam’s 1998 film Dil Se.., was composed by A. R. Rahman, written by Gulzar, and sung in duet with Sapna Awasthi. It was also featured in the musical Bombay Dreams and, in remixed arrangements, in the titles and credits segments of Spike Lee’s 2006 film, Inside Man. Singh later gained more international fame for singing “Jai Ho” from the film Slumdog Millionaire, which won an Academy Award for Best Original Song and a Grammy Award for Best Song Written for a Motion Picture, Television or Other Visual Media.

Recently, Anil Singhvi spoke to King of Bollywood music Mika Singh, and Bollywood Diva Celina Jaitly under the series #StarsOnZeeBusiness. The sessions were filled with fun, music, market investments and much more.

During the candid chat, Celina had congratulated Anil Singhvi on the news that Zee Business is now No. 1 business news channel in the country. Celina also asked many questions about investment, savings and other aspects of financial world.

Also, during the LIVE show only with Anil Singhvi, Mika gave a big breaking news that he is coming up with a new version of 'Saawan mein lag gayi aag' song.