SpiceJet soars, Rakesh Jhunjhunwala set to gain by 32% going forward; here is why you should invest in this airline

SBI Capital has put a buy rating on SpiceJet with a price target of Rs 175. The airline is expected to rise by 32%, making investors like Rakesh Jhunjhunwala laugh all the way to the bank. 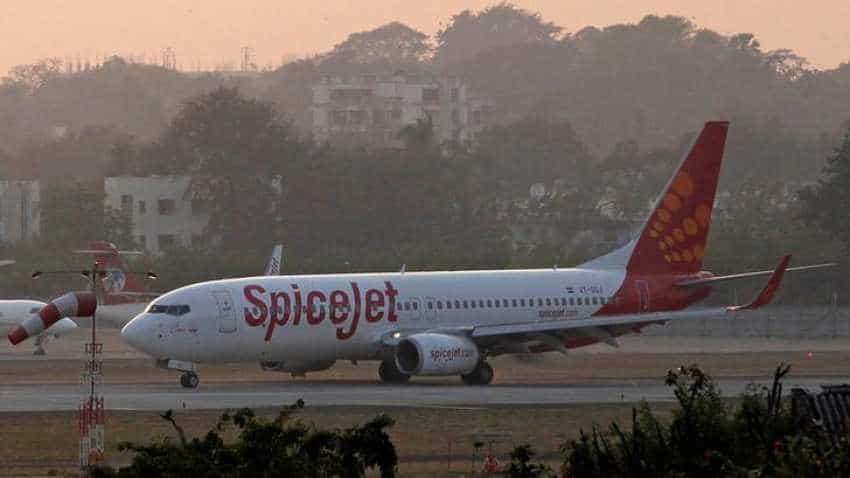 Within just 48 hours, the airline has given over 23% return to its investors. Photo: Reuters
Written By: ZeeBiz WebTeam
RELATED NEWS

Private carrier SpiceJet has prepped strongly to take on its peers like the beleaguered Jet Airways and market leader Indigo, with new additions to its fleet of aircraft and by expanding on international routes. The start of this week’s trading session, has been stellar for SpiceJet shares. On Tuesday, the share price of SpiceJet finished at Rs 132.70 per piece, up by Rs 13.35 or 11.19%. And then, within just 48 hours, the airline has given over 23% return to its investors. That said, among the major gainers from SpiceJet performance will be none other than Dalal Street king Rakesh Jhunjhunwala who have recently bought shares in bulk. Guess what! SBI Capital has put a buy rating on SpiceJet with a price target of Rs 175. The airline is expected to rise by 32%, making investors like Rakesh Jhunjhunwala laugh all the way to the bank.

In a notification to Sensex on Tuesday, SpiceJet stated that, they will add five 90-seater Q400 aircraft, taking its Bombardier fleet size to 32. Three of these planes will join SpiceJet’s fleet in the next ten days while the remaining two will be inducted by June. The airline had last week announced the induction of 16 Boeing 737-800 NG aircraft on dry lease.

Talking about SpiceJet, Santosh Hiredesai and Chalasani Teja analysts at SBI Capital said, “Though all of Jet's peers that have weathered the storm stand to gain, SpiceJet is best placed to capitalize on the situation due to its fleet structure – it is the only other Boeing operator in the market for narrow body aircraft, which is the mainstay for the domestic/short haul international network. When Kingfisher, which had an all-Airbus fleet, undertook major rationalization in 2012/2013 (fleet down from peak of 67 to 12) IndiGo benefited the most.”

The duo added, “More importantly, the other critical resource for an airline, i.e., trained pilots are "type‟ rated for a particular model and need 6-8 months before they are certified (by DGCA) to fly a different type of aircraft. So, it is no surprise that SpiceJet is adding 16 737 NG aircraft (mostly those re-possessed by lessors from Jet Airways) under a dry lease arrangement; it could also find it easy to absorb the existing workforce (pilots, engineering and ground staff) and quickly deploy these planes to lock-in slots/bilaterals.”

Thereby, SBI Capital analysts said, “If it takes longer to resolve the Jet Airways issue SpiceJet could well lease more planes (Jet Airways had a total of 84 737 NGs) – non-payment of lease rentals is a breach of agreement that entitles lessors to take possession and re-deploy (cost efficient to do it in the same geography). In FY20, we estimate that SpiceJet‟s capacity (ASKM) may go up 35% YoY on the back of its announced fleet induction plans.”

However, they said, “due to sharp consolidation in system capacity, we have revised upwards our yield assumptions for H1FY20 from 3% to 5% (normalizing back in FY21 as capacity is added gradually). Consequently, FY20e EPS has been revised up 45%. We reiterate BUY with TP of Rs175/share at 8x FY21 EV/EBITDAR.”

The Rs 175 target price will be a new all-time high for SpiceJet.

Coming back to Jhunjhunwala, he holds about 1.25% stake in the airline with 7,500,000 shares. The ace investor has already added couple of crores in his kitty in past two days. On Monday, Jhunjhunwala’s wealth stood nearly Rs 88 crore in SpiceJet, which increased to Rs 99.5 crore by end of Tuesday, according to TrendLyne.com data. On Wednesday, the stock exchanges are shut on occasion of Mahavir Jayanti, hence, in the next trading session SpiceJet can become part of your investment plan.