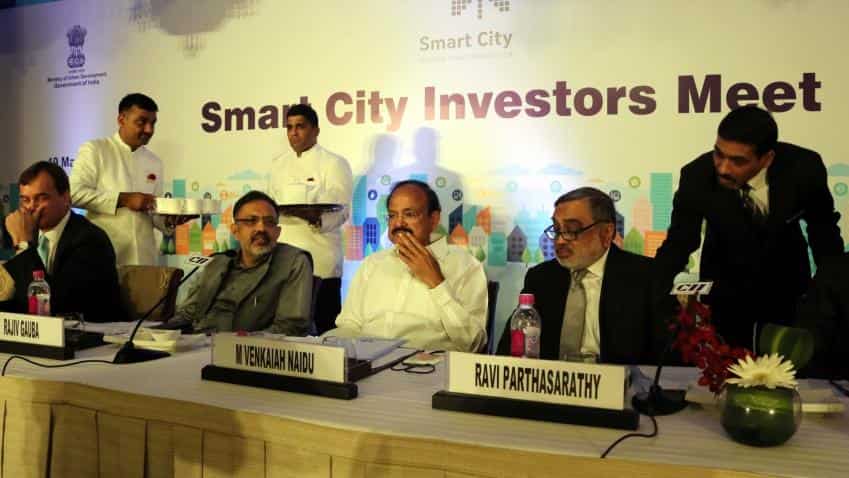 There are huge opportunities for private players as the first 20 cities would require investment to the tune of $7 billion, says M Venkaiah Naidu. Photo: IANS
Written By: PTI
RELATED NEWS

Names of 14 more new cities would be announced soon under the flagship 'Smart City Mission' which will receive the first tranche of funding, the government on Thursday said.

"Already 20 cities have been selected. Another 13 or 14 cities are going to be announced in a day or two and these will be included in the first set of cities, which will receive the first tranche of funding," Urban Development Minister M Venkaiah Naidu told a gathering at the CII Smart City Investors Meet here.

He said there are huge opportunities for private players as the first 20 cities would require investment to the tune of $7 billion.

Emphasising on the role of the private sector in the development of smart cities, Naidu said there is an urgent need to involve it and bring in their expertise and technology to meet the aspirations of the citizens in these cities.

In the backdrop of Assembly results being declared today in five states, the minister said there is a move towards stability in the states as well, which will augur well for the developmental initiatives.

Later on the sidelines of the event, he said the ground work for the first round of smart city projects have been completed and construction was expected to be begin in these cities by June 25.

"Happy that smart city mission is becoming a reality, ground work is completed, detailed project reports (DPRs) are approved, money being released for the first installment and by June 25 I would like to see smart city construciton work start in different cities," he said.

The event was attended by ambassadors of the US, Japan, South Korea, Spain and the High Commissioner of UK, among others.

US Ambassador Richard Verma brought out the challenges for the Indian urban landscape including governance, pollution and congestion. He emphasised that these can be converted into opportunities through the Smart City Mission.

He reiterated the US' commitment to help India in three cities - Allahabad, Ajmer and Vizag -- through cooperation of some of the best of US companies.

Naidu said a lot of investors are showing interest in the public-private partnership (PPP) projects. "They can invest in transportation, water supply, sewerage plants, alternative transport systmem... all opportunities are open," he said.

Meanwhile, he said, the passage of Real Estate Bill by Parliament will bring in "credibility" and once the regulators are established in the states, it would bring in "correction in the negative trend" in the market.

Verma also emphasised upon need to focus on local solutions and careful planning through means like community engagement and collaboration, continue implementation of advanced technologies and apply innovative financial solutions.

He promised to support Smart City Mission through the UK's expertise in urban design; planning and architecture; infrastructure engineering and construction; data, software and analytics; project management; financing and real estate; and public engagement and customised user-centric solutions, among other areas.

All these themes would be displayed in the three cities chosen by the UK - Pune, Indore and Amravati.

Ambassador of Japan Kenji Hiramatsu highlighted some of the key areas of collaboration with India, including sewerage and water supply systems, energy efficiency and conservation, maximising the use of energy through stable Smart Grid systems, solar technology, and urban transportation systems.

Hiramatsu shared that Japan would be also provide technical assistance to India to make the cities and urban infrastructure resilient to natural disasters like floods and earthquakes.

He also highlighted the financial commitments made by Japanese companies to the Indian economy, like Softbank's USD 20 billion commitment to India's renewable energy sector in the next 10 years.

Ambassador of Korea Cho Hyun suggested that while transforming cities, the focus should be on the use of technologies and meticulous planning involving local communities and stakeholders.