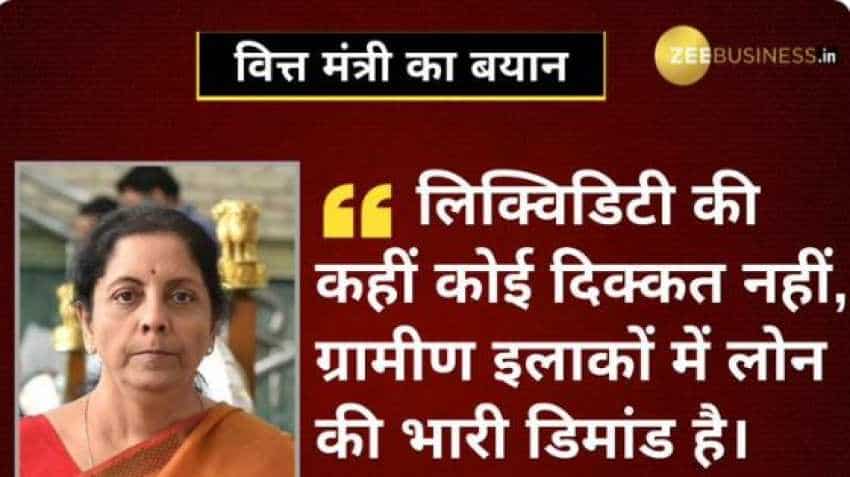 I haven't heard liquidity crisis as a problem for anybody. That is one thing that I want to take as a message, said Sitharaman.
Written By: ZeeBiz WebTeam
Edited By: Harish Dugh
RELATED NEWS

In her presser after holding a meeting with  Private Sector Banks and Financial Institutions in New Delhi today, FM Nirmala Sitharaman said that the services sector showing high appetite for credit. Regarding the problem with the automobiles sector, FM added, "Low commercial vehicle demand a cyclical problem."

Finance Minister Sitharaman rebutted all reports of there being a liquidity crisis. She said that such claims are not the government version and such claims need not to be taken seriously. FM assured the nation that there was no liquidity crisis at any of the lending institutions in India.

FM Sitharaman said, "I haven't heard liquidity crisis as a problem for anybody. That is one thing that I want to take as a message, means more liquidity will be reaching lending institutions in coming times."

The Finance Ministry officials also assured that in coming times, Indian banks would be organising loan melas in various parts of the country and NBFC, HFCS and many other lending institutions would be participating there.

For good measure underlining her statement on liquidity, FM added, "Have not heard of liquidity as a problem from banks, MFs, NBFCs."

As far as the loan melas are concerned, Finance Secretary revealed the timing concerned by saying, "The outreach programme by banks will be held around Diwali."

Another revelation made during the press meet was that private banks too will be participating in credit outreach programme.