Tata Consultancy Services (TCS) remained the star performer of the week. The stock hit a fresh high to settle at Rs 3406.40, up 6.7 per cent on the BSE. 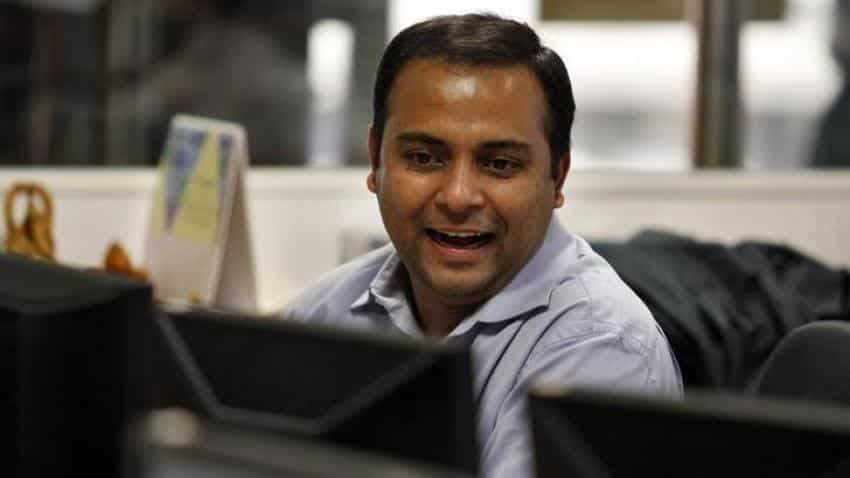 Sensex gained 223 points or 0.6 per cent to settle at 34,415.58 for the week. Image source: Reuters
Written By: ZeeBiz WebTeam
RELATED NEWS

The Sensex and Nifty settled Friday's trade lower but marked a fourth consecutive weekly gain thanks a record surge in Tata Consultancy Services (TCS), which ended at fresh closing high. For the week, the Sensex gained 223 points or 0.6 per cent to settle at 34,415.58, while the broader Nifty50 ended at 10,564.05, up 83 points or 0.8 per cent.

Tata Consultancy Services (TCS) remained the star performer of the week. The stock hit a fresh high to settle at Rs 3406.40, up 6.7 per cent on the BSE after country's largest software exporter on Thursday reported a 4.4 per cent growth in its consolidated net profit at Rs 6,904 crore for the March 2018 quarter and its board recommended a 1:1 bonus share issue, along with Rs 29 per share dividend.

An otherwise byoyant week got upset by minutes of Reserve Bank of India (RBI)'s monetary policy meeting, which suggested a rate hike could well be on cards. RBI could take a more hawkish tone starting as early as June despite easing inflation, minutes of the monetary policy committee's (MPC) meeting that took place this month showed. The RBI's MPC members flagged several concerns, including an increase in minimum support prices for farmers and high and volatile crude oil prices.

"The week started off on a bullish note since global markets were positive on better than estimated earnings and data. European markets were the major ingredient that leads the Asian markets. Major European indices like CAC, DAX and FTSE were above their Feb highs indicating the revival in the underlying trend. The derivatives data suggested a short-term base in Nifty at 10400 - 10450 levels since we have seen a writing at those strikes while the upward momentum is seen extended to 10650 - 10700 since highest OI is seen with long positions build up at that strikes," said Mustafa Nadeem, CEO, Epic Research.

"Fundamentally, Market will see more of a stock specific action since there is a line up for results that will affect the breadth as prices will adjust to earnings numbers. The week is lined up with numbers for majors like LIC, Bharti Airtel, Reliance Infra, Ultratech, M&M financial, Wipro and so on," he added.

Neera Tanden has shown bad judgment in the past: Nikki Haley

First vaccines will go to health care workers: US panel

Aaron Eckhart: ''The Dark Knight'' is a reflection of our times