Zee Business Managing Editor Anil Singhvi earlier in morning today had said that the market regulator Securities and Exchange Board of India (SEBI) is likely to announce an easing in delisting norms of subsidiary companies. 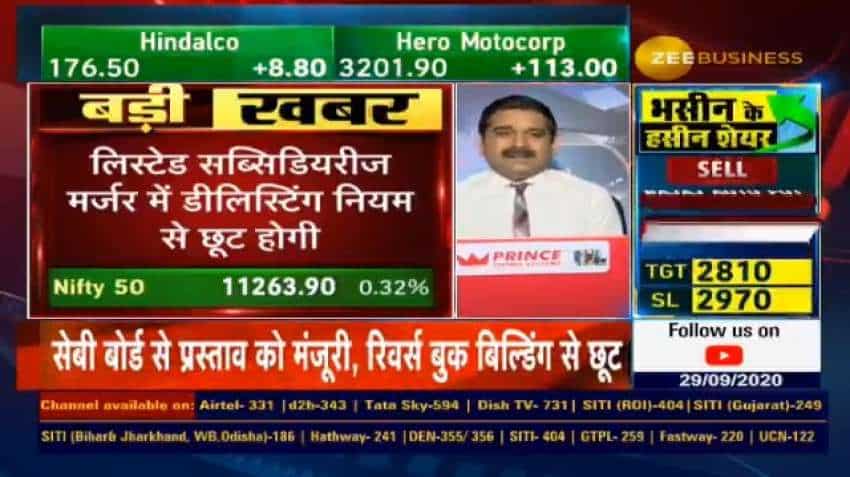 The Market Guru had said that listed subsidiaries will likely be exempted from the requirement of delisting at the time of merger.
Written By: ZeeBiz WebTeam
Edited By: Harish Dugh
RELATED NEWS

Zee Business Managing Editor Anil Singhvi earlier today had said that the market regulator Securities and Exchange Board of India (SEBI) is likely to announce an easing in delisting norms of subsidiary companies. And within 10 hours of this Zee Business exclusive report, SEBI has issued a notification about the same.

SEBI in its statement said, "The  Board  has  decided  to  grant  exemption  from  the  Reverse  Book  Building  process (“RBB”) for delisting of listed subsidiary, where it becomes the wholly owned subsidiary of the listed parent pursuant to a scheme of arrangement. To  be  eligible  to  take  this route,  the  listed  holding  company  and  the  listed  subsidiary should be in the same line of business.  Both the companies should be compliant with the  SEBI (Listing  Obligations  and  Disclosure  Requirements)  Regulations,  2015, specifically, the regulations (no. 11, 37 and 94) pertaining to processing of the schemes of arrangement."

Informing about the amendments to SEBI (debenture trustee) Act, 1993 the market regulator said, "The Board approved the proposal of strengthening the role of Debenture Trustees (DT(s)) so as to protect the interest of debenture holders. The DT(s) shall exercise independent due diligence of the assets on which charge is being created. The DT(s) shall take required action by convening the meeting of debenture holders for enforcement of security, joining the inter-creditor agreement (under the framework specified by RBI), etc."

SEBI went on to add that DT(s) shall also carry out continuous monitoring of the asset cover including obtaining mandatory certificate from the statutory auditor on half yearly basis. Further, the issuer company shall create recovery expense fund at the time of issuance of debt securities that may be utilized by DT(s) in the event of default, for taking appropriate legal action to enforce the security.

SEBI had some good news on Mutual Fund segment too. It said, "Currently, the SEBI (Mutual Funds) Regulations, 1996 (“MF Regulations”) provide for Asset Management Companies(AMCs) and Trustees to follow a Code of Conduct. Also, under current MF Regulations, CEO is entrusted with several responsibilities. The Board after deliberation, approved the amendment of MF Regulations to introduce Code of Conduct for Fund Managers including Chief Investment Officers and Dealers of AMCs. Further, the Chief Executive Officer will be responsible to ensure that the Code of Conducti's followed by all such officers."