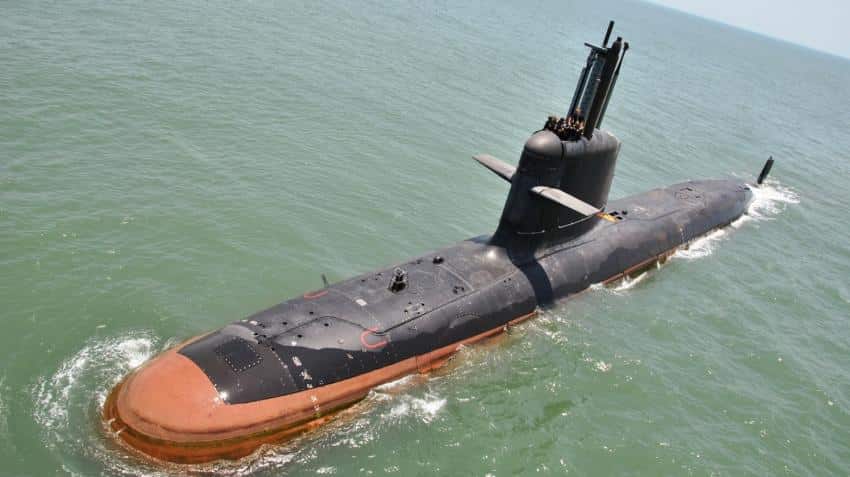 The company is also seeking a court order to force The Australian to hand over the documents and remove them from its website. Photo: IANS
Written By: IANS
RELATED NEWS

In a bid to prevent further publication of the information regarding the leaked documents pertaining to Indian Navy's six Scorpene submarines, French shipbuilder DCNS has threatened to move court.

The company DCNS, which is at the centre of a global submarine data leak scandal, wants to prevent the Aussie publication, The Australian, from releasing any more confidential data contained in 22,400 secret documents because it may cause harm to its customer -- the Indian Navy.

Lawyers for DCNS have told The Australian that the company will seek an injunction in the Supreme Court of New South Wales to prevent further publication of documents.

The move by DCNS which has won a contract to design Australia`s new $50 billion submarine fleet comes as a former commander of the US Pacific Fleet Submarine Force warned that the Scorpene leaks scandal would undermine confidence in the ability of French companies to protect classified information, The Australian reported on Sunday.

Rear Admiral (retired) John Padgett, who is also the president of the influential US Naval Submarine League, has warned that "aggressive action" needed to be taken to investigate the leak and that France should share the outcome with Australia.

The company is also seeking a court order to force The Australian to hand over the documents and remove them from its website.

"The publication of this highly valuable document causes a direct harm to DCNS and its customer in terms of spread of sensitive and ­restricted information, image and reputation," says an affidavit by DCNS`s lawyer Justine Munsie.

The Australian redacted the most sensitive details from the documents before their public­ation.

Admiral Padgett said the most significant implication of the DCNS leak was that any potential adversary, if armed with classified data, could create and exploit the vulnerabilities it revealed.

"It is never good for an ­opponent to have your playbook," he said.

"As a member of NATO, the French government and French military demonstrate that they enforce effective security controls and have a solid reputa­tion with their allies.

"It is not clear to me that the French military-industrial base meets those same standards and breaches such as the (Scorpene data leak) undermine confidence that sensitive or classified inform­ation will remain secure," he added.

Admiral Padgett said the leak investigation had to determine exactly how the breach occurred and what "aggressive action" would be taken to correct deficient security controls.

His comments came as a French public prosecutor opened a preliminary investigation into the data leak, with DCNS filing a complaint for breach of trust.

"We filed a complaint against unknown persons for breach of trust with the Paris prosecutor," said a DCNS spokesman.

Apart from the disclosures related to cylindrical and flank array, sonar interception, acoustic signature and levels of noise radiation, the leaked documents on the Scopene submarine include details of the capabilities of the SM.39 anti-ship missile expected to be used on the submarine.

Meanwhile, the Indian Navy top officers have said that they do not expect the project to be delayed and that the first vessel, INS Kalvari, which is currently undergoing sea trials, will be inducted by the year-end.

The Indian Navy has maintained the leaked data will not compromise the boat`s stealth capabilities, an officer told IANS that, if needed, India is capable of making suitable changes in the submarines keeping in mind the "worst-case scenario".