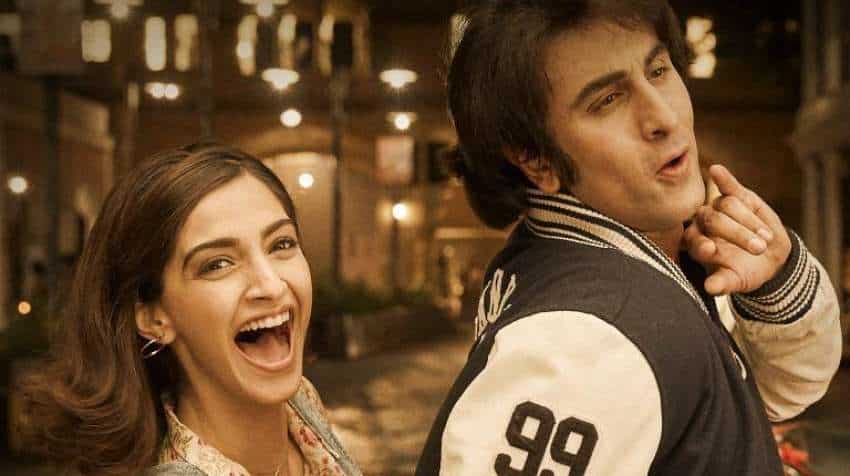 The movie proved to be a big booster for Ranbir Kapoor after his latest flop ‘Jagga Jasoos’. Image source: Twitter
Written By: ZeeBiz WebTeam
RELATED NEWS

Sanju collection: Rajkumar Hirani directed, Ranbir Kapoor starrer Sanju has finally hit theatres. The movie is based on a biopic of actor Sanjay Dutt. It was most awaited movie of 2018. The controversial life of the actor Sanjay Dutt is one of the major reasons that helped boost the footfalls in cinema halls.

The movie crossed the mark of Rs 30 crore on the first day of its release and became the highest opener of 2018. To be precise movie earned Rs 34.75 crore on the first day and is ready to set more records. The film has been released in over 5,000 screens around the country and abroad. Trade experts also predicted that movie will cross Rs 100 Crore in the first weekend itself.

The movie proved to be a big booster for Ranbir Kapoor after his latest flop ‘Jagga Jasoos’. Also, if we have a view on the Day 1 collection of RajKumar Hirani’s directed films; Sanju became the highest opening day grosser. Collecting Rs 34.75 crore Sanju has not only became the biggest opener of 2018 but also became RajKumar Hirani’s highest opening day grosser.

Hirani’s previous films like PK and 3 Idiots despite being counted as marvellous movies of the director only earned Rs 26.63 cr and Rs 12.78 cr respectively. Sanju crossed all the mark set by his previous films. This movie can be one of the biggest boosts in Hirani’s career. Sanju has no competition in the theatres which may make it the biggest hit of Hirani’s life.