Samvat 2075: Are you investing in Mahurat trading hours? Get rich! Diwali on Dalal Street, these 15 stocks are best bet

The practice of Mahurat trading in India, has been followed since ages, as it is considered as a good luck charm for investors to trade on Diwali with an aim it will drive their wealth to greater heights. 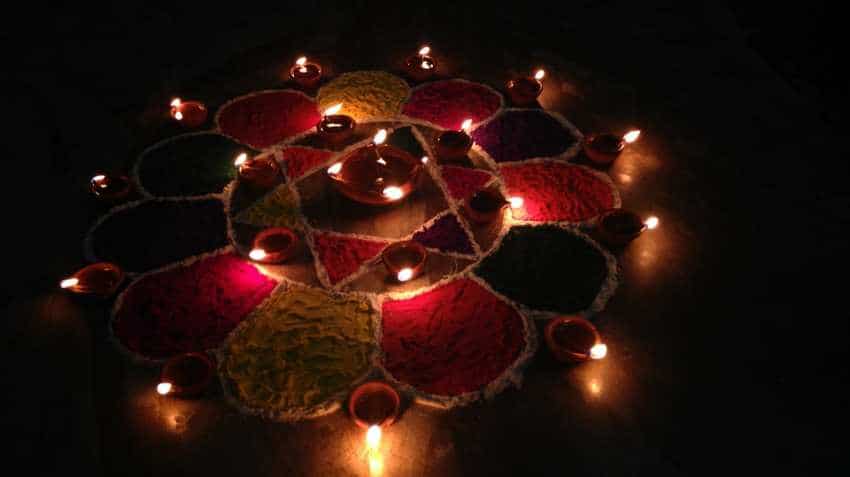 While India celebrates the auspicious occasion of Diwali, many investors are prepping to make the most of this day by making their bets on stock exchanges. Every year on Diwali, the stock exchanges get open for an hour during evening time, allowing investors to trade on your favorite stocks. This process is called Mahurat Trading which is at largely derived by Gujrati culture - a dominant section of people in Dalal Street who wish to do similar trading on hours of Diwali. The practice of Mahurat trading in India, has been followed since ages, as it is considered as a good luck charm for investors to trade on Diwali with an aim it will drive their wealth to greater heights.

But as there will Diwali on Dalal Street today, choosing the right stock is the key for entire process. You would not want to invest in anything and regret later on this auspicious day.

If you are also planning to trade during the hours of Mahurat trading today in the evening, and is confused in which stock to pick. Here's a list of 15 stocks which can emerge as best bet on exchanges, and give you heavy returns in the course of one year's time. Simply put, by the next Diwali, you can sit on the pile heavy cash.

Stocks markets has always been considered as best return giver on investment, despite the risk and volatility involved in trading.

According to Progressive Research report, there are five stocks that be best investment option today. They are:

This company appears to be comforable with margins they are earning. The game changer would be once the property development starts hitting the profits and land banks are monetized.

In the current scenario with real estate not doing that well, development of the entire land bank available with the company can take nearly 5 - 7 years, which makes the idea long term in nature.

It is believed to advocate a SIP in the stock for long term gains and a target price of Rs 500 is expected. This would be an 82% jump in its stock price compared to current market price.

Texmaco is no longer only a wagon manufacturer but now has a bouquet of products that it can offer to the railways. The Indian Railways has opened tenders for supply of long rails for the first time in three decades to private sector players.

This is encouraging in terms of overall growth expected across the railway sector, with one of the beneficiaries being Texmac.

A buy call has been maintained on the stock with a target price of Rs 150 over a 12 month horizon. With this, the company can give you a whopping 143% of return in year's time if compared with current market price.

This company stands strong and lucrative to benefit from the growth expected across the automotive as well as the listend non-automotive sectors going forward.

The conviction provided by the consistent trajectory growth of the company is immense. Hence, a buy call has been given on Alicon with a target price of a massive Rs 1,000 over 12 months period. Such would reflect about 64% return  as against current market price.

The company seems to be taking the right strides in terms of new products innovations, addition of divisions as per the lucrativeness of the market which they cater to and the recent merger which is in process.

The consolidation would add strength to the overall business offerings, manufacturing expertise and better customer range.

Gufic is now on the verge to start its second innings, although a gradual one. Analysts are very optimistic on the future prospects of the company and recommend a buy on the stock with a target price of Rs 175 over the next 12 month. This would give a gain of 85% in a year, if compared to current market price.

Thermax has been strongly present in the industry with the manufacturing capacities, technology as well as manpower capabitilies. It is the aptly placed to capitalize on the recover in the capex cycles across different industries.

The company is gradually inching towards its 10 year plan of revenues of Rs 160 billion backed by the well planned business execution and planned order procurements across different sectors, standing out as a strong contender in the capital goods space.

Hence, it is recommended to buy the stock with a target price of Rs 1,230 over next 12 months. Such would lead to 23% gain if compared with current market price.

According to Reliance Securities 10 stocks were listed out which can be best pick during today's Mahurat trading.

Despite adverse operating environment, HDFC Bank continued to deliver strong growth on operating and asset quality front. It is expected to be major beneficiaries of the current liquidity crisis for NBFC segment. Further, incremental capital will help the Bank to support its growth plan over next 3-4 years.

Hence, the stock is recommended as buy with a target price of Rs 2,471.

Robust deal wins, impressive performances in Financial Services and Retail verticals and positive business outlook in the key US and European geographies drive our confidence on Infosys’ underlying growth trajectory.

It is expected that, increased business investments to reflect in better revenue growth and ultimately in margins.

A BUY call has been recommended on the stock with a Target Price of Rs795.

Reliance Securities believe that the Bank is approaching the end of recognition of stressed loan cycle, which along with improving PCR clearly indicates sharp moderation in credit cost from 2HFY19E onwards.

Further, overhang of controversy relating to top management team is behind and new management seems to be confident to maintain the Bank’s leadership in private banking space.

Further, they expect the Bank to be a major gainer of the current crisis in NBFC space, as it has bestin-class liability franchises along with superior customer outreach across business segments.

Looking ahead, they expect the Bank to deliver sustained improvement in operating metrics led by dwindling headwinds on asset quality front and improving balance sheet especially in Retail segment. Hence, a buy call is recommended with a target price of Rs 390.

Overall, ITC is witnessing improved traction across verticals. Analysts at Reliance Securities, believe that the FMCG others business has gained scale and will drive profitability, going forward.

At CMP, the stock trades at attractive valuations of 24x FY20E earnings, which discounts the regulatory challenges of cigarettes business, but the other fast-growing businesses are undervalued.

Analysts at Reliance said, "We remain positive on ITC on attractive valuation and improving business prospects."

SUNP has been investing significantly for building US specialty franchise. Further, due to successful US FDA clearance for Halol facility, best-in-class franchise, strong track record of transforming acquired assets, we see multiple growth drivers for SUNP.

It is expected that,  SUNP’s overall sales earnings to clock 19%/45% CAGR over FY18-20E, while EBITDA margin is expected to expand by 433bps to 25.5%. With favourable currency movement, healthy growth in India business, strong outlook for ex-Taro US business led by launch of specialty products, and positive operating
leverage.

Hence, BUY recommendation on the stock with a Target Price of Rs685 is given.

It is believed that, the MS Alliance to be a key growth driver, and Sonata has conducted MS showcases in Dubai, London, the US and India, and won deals as well.

Acquisitive opportunities are also being closely evaluated with potential US$5-25mn size, mainly in the MS ecosystem.

Analysts at Reliance Securities said, "We believe ENGR will remain highly cash-rich and maintain its dividend payout of ~50% during FY18-20E. At CMP, the stock trades at 17.0x FY19E and 13.9x FY20E earnings respectively."

A BUY recommendation on the stock with a Target Price of Rs 169 is given.

Continued focus on increasing loan book in low-ticket Retail, SME and AIB segments, the Bank is augmenting its footprint both on physical and digital front.

Further, focus on increasing efficiency of existing network is expected to reduce C/I ratio in the long-term, which may eventually lead to sustained earnings growth.

It is expected that,  the Bank to be one of the key beneficiaries of current crisis in the NBFC space, as it witnessed substantially higher competition in last few years from the NBFCs among its customer base.

Hence, a BUY recommendation on the stock with an unrevised Target Price of Rs207 (based on 2x FY20E Adjusted book value).

Looking forward, Reliance expects ESC’s revenue to clock 16% CAGR through FY18-20E, supported by incremental revenues from spares and new segments, its EBITDA margin is expected to expand to 12.1% in FY20E from 11.2% in FY18.

In view of strong industry performance, better traction from railway business and healthy margin profile, the analysts have reiterated BUY recommendation on the stock with Target Price of Rs 1,015, valuing it at 16.5x FY20E EPS.

Reliance continues to view NBCC as a robust growth story owing to its PWO status and niche presence in redevelopment of government’s old colonies. Further, a debt-free balance-sheet and superior return ratios augur well for the Company.

Following sharp correction in last four months, current valuations at 23x and 16x EPS FY19E and FY20E, respectively appear to be attractive. They have maintained BUY recommendation on the stock with a Target Price of Rs103.

Considering above, if you want to get rich in one year's time, surely the above mentioned stock price can be worth noted. Pick wisely, and enjoy Diwali on Dalal Street.!

Stocks, ETFs or Gold? 10 simple steps to gift wealth and prosperity to near and dear ones this festive season

Muhurat Trading: Timing, history & significance; know what changed between last Diwali and this one