Stretching its losses for the second-straight week, the home currency depreciated by 21 paise to end at 63.84. 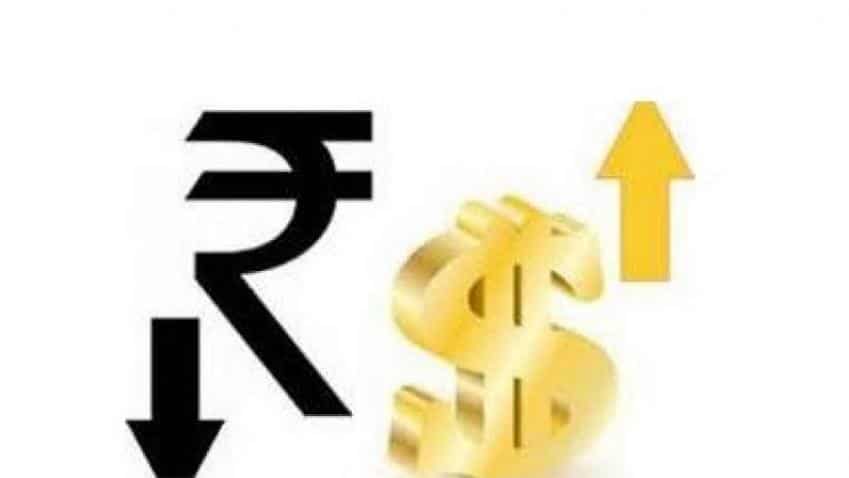 The Indian rupee skidded further against the beleagured dollar as forex market sentiment took a hard hit on the back of suring global crude prices and growing trade deficit concerns.

Stretching its losses for the second-straight week, the home currency depreciated by 21 paise to end at 63.84.

Overall trading mood turned into dismay after the country's trade deficit widened to a three-year high on higher oil and gold imports.

The rising inflation and some speculation that the government may miss its deficit target after international crude oil prices hit USD 70 a barrel will give less space to RBI to cut rates in the near term, adding to worries.

Indeed it was a highly volatile week for currency market as rupee climbed to a fresh 3-year high of 63.33 before retreating sharply.

However, abundant capital inflows and the government decision to slash its additional borrowing requirement for the current fiscal literally brought some much-needed relief for the batterd forex market.

A breathtaking rally in domestic equities too weighed on the forex trading front.

The week started with a strong gap-up at 63.49 against weekend close of 63.63 at the Interbank Foreign Exchange (forex) market due to bouts of dollar selling and strengthened to hit a high of 63.33.

But, it soon turned volatile and succumbed to heavy selling pressure, breaching the key 64-mark to touch a low of 64.15 before regaining some lost ground towards the fag-end trade.

The domestic unit lost a staggering 47 paise in two-week slide.

Meanwhile, the foreign exchange reserves rose by USD 2.7 billion to scale a new life-time high of USD 413.825 billion in the week to January 12, the RBI said.

In the international commodity front, global crude prices took a knock, plunging about 1 percent on Friday, posting their first weekly loss in five weeks even as a sharp rise in U.S. Production outweighed ongoing declines in crude inventories.

The Venezuelan crisis added some fuel to the fears from within OPEC that their production cuts are biting faster than expected, which could make the inventory drawdowns overshoot at some point.

Brent crude futures settled at USD 68.61 a barrel after hitting their highest since December 2014 at USD 70.37.

On the global front, the American unit failed to gain any upward momentum during the week undoubtedly been weighed down by fears of a government shutdown despite firming interest rate expectations.

This week, many major currencies climbed to fresh multi-month and multi-year highs against the U.S. Dollar.

Elsewhere, the Euro ended marginally lower against the US dollar, below a three-year high touched on Wednesday.

The common currency booked a fifth straight week of gains in advance of next Thursday's ECBank meeting.

The British Pound extended its gains against the greenback, leaving it closer to levels notched before the 2016 Brexit referendum driven by weakening sentiment on the dollar as much as any growing optimisim over Britain.