The Indian rupee opened on a positive note on Thursday morning as counting of votes for 542 constituencies got underway at 8 am. Rupee opened 21 paise up at 69.45 against the US dollar. 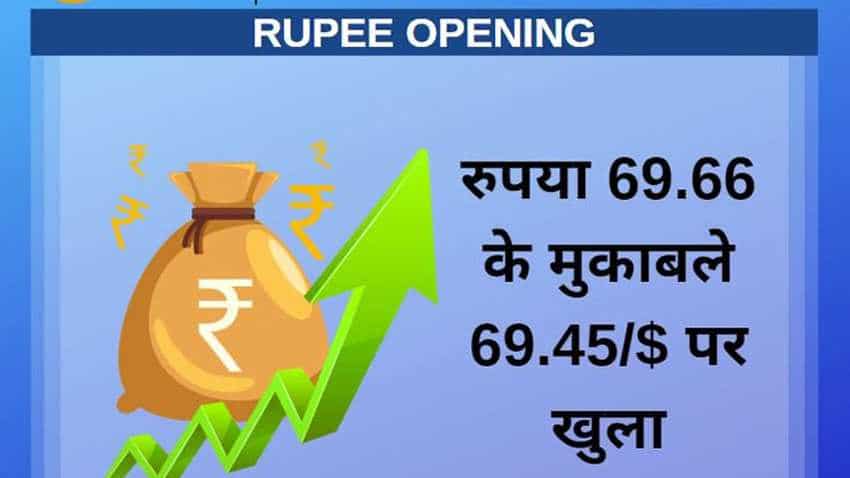 The Indian rupee opened on a positive note on Thursday morning as counting of votes for 542 constituencies got underway at 8 am. Rupee opened 21 paise up at 69.45 against the US dollar. On Wednesday, rupee had seen a marginal 6 paise rise at 69.66 with uptrend in equities and easing crude prices. However, foreign fund outflows dampened the sentiment of forex traders, the dealers said. At the interbank foreign exchange, the domestic unit opened higher at 69.70 and further went to touch the day's high of 69.62.

On Tuesday, the domestic unit had closed 2 paise higher at 69.72. Meanwhile, government bonds rose, leading to 0.60 per cent drop in yield to 7.26 per cent. The US currency was trading weak in overseas market as the dollar index fell 0.07 per cent to 97.99 against its six global rivals.

On domestic bourses, the Sensex ended 140.41 points, or 0.36 per cent, higher at 39,110.21, and the broader NSE Nifty rose 28.80 points, or 0.25 per cent, to 11,737.90. The domestic markets are expected to continue their positive run on Thursday if the election result is in favour of the NDA, as predicted by most exit polls. Both Sensex and Nifty opened at records high. Sensex opened around 500 points up while Nifty was up by over 150 points.

Foreign institutional investors (FIIs) emerged as net sellers in the capital markets, pulling out Rs 965.02 crore on Wednesday, provisional exchange data showed. Brent crude, the global benchmark, fell 0.46 per cent to trade at 71.85 per barrel. The Financial Benchmark India Private Ltd (FBIL) set the reference rate for the rupee/dollar at 69.7291 and for rupee/euro at 77.7242.