RSS chief Mohan Bhagwat said that the kind of harmony that should have been in the society is still not there. 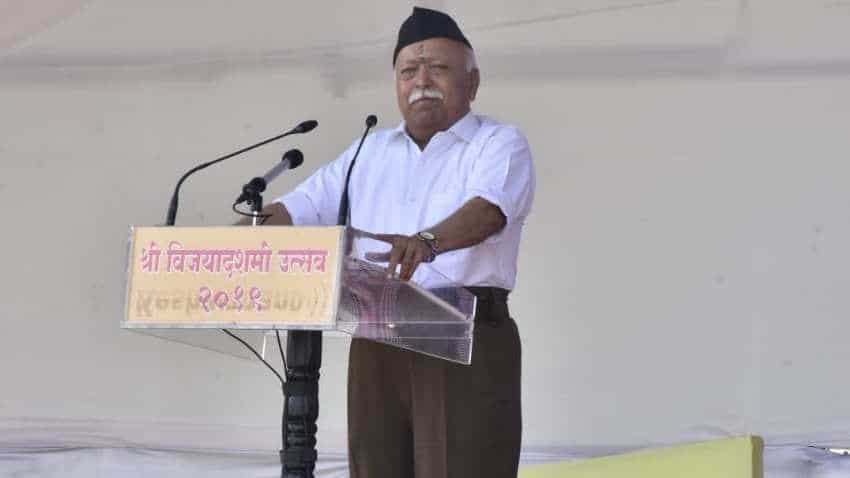 Mohan Bhagwat said that diversity is an intrinsic strength of the nation.
Written By: IANS
RELATED NEWS

Rashtriya Swayamsevak Sangh (RSS) Chief Mohan Bhagwat has said that some incidents of violence such as lynchings were actually being branded to defame India, Hindu society and create fear among some communities.

Speaking at the foundation day celebrations at Maharashtra's Nagpur on Tuesday, Bhagwat said that in such incidents, the RSS members do not get involved and rather they try to stop it. He said that the kind of harmony that should have been in the society is still not there.

He also said that the RSS is trying to thwart such violent incidents. Such incidents have had no tradition in the country, but there are efforts to portray them as so and by using terms like lynchings, they want to malign the country and the Hindu society.

He further added that certain elements of society are trying to divide the country. They want to create a fight between the two communities by dragging the Sangh name in the incidents. Attempts are being made by vested interests to create distrust, fear and hostility among sections who have not yet come in contact with the Sangh.

Bhagwat said that diversity is an intrinsic strength of the nation. But the diversity of caste, creed, language and region are being used by vested interests to separate one from another, turning them into differences, imposing fabricated identities on manufactured separations, he further added.

He said that for the last nine decades, the RSS has been working for creating "ekatmata" (unity), "sadbhavana" (goodwill), "sadacharan" (good conduct) and "sadvyavahar" (good behaviour) in the society, and a clear vision and devotion towards the nation.

He appealed that whatever the difference of opinion be, howsoever provocative actions might have taken place, society must act by remaining within the limits of the Constitution and repose faith in the police and the judicial system.

The RSS Chief hailed the Centre for the abrogation of Article 370 in Jammu and Kashmir. He said that the move of the re-elected regime to nullify the Article has once again proved that it has the courage to fulfill the expectations and respect people's sentiments and wishes in the interest of the society.

Speaking on the economic situation in the country, Bhagwat said that the international effect can be felt here also. The trade tussle between the US and China is going to affect all the countries.