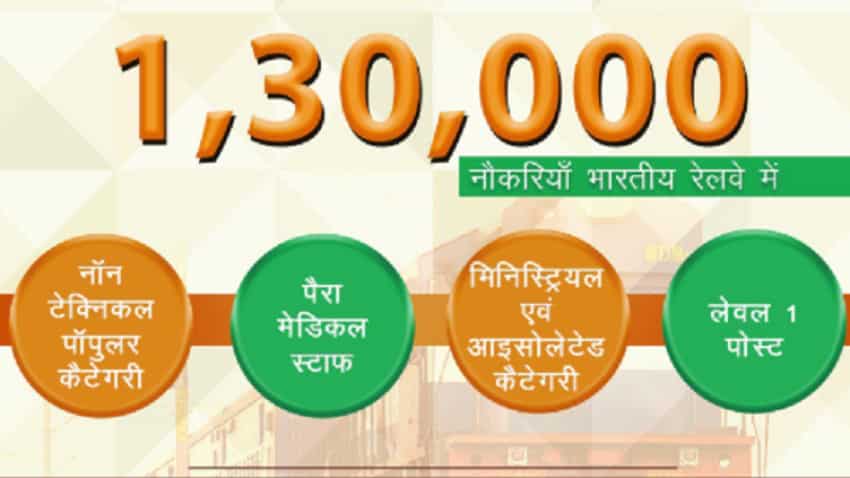 RRB recruitment 2019: Piyush Goyal informed through an infographic that Railways has started the recruitment process for 1.3 lakh posts. Image: Twitter/PiyushGoyal

RRB recruitment 2019:  Indian Railways has started fresh hiring to benefit economic weaker sections who enjoys 10% quota in jobs now. Union Railway minister Piyush Goyal tweeted in Hindi on Thursday, "Recruitment process to give reservation to the poor begins. After the historical constitutional amendment, Railways has started the recruitment process for hiring 1.3 lakh staff under different categories. In this, 10% reservation has been made for the poor while maintaining the existing reservation for other classes."

In the tweet, Goyal informed through an infographic that Railways has started the recruitment process for 1.3 lakh posts in the non-technical popular category, paramedical staff, ministerial and isolated category and Level 1 Post.

Earlier on 20th February, Zee Business Online had reported that the Indian Railways has notified vacancies for 1,30,000 posts across railway divisions.

The Railways' new announcement has come even as the recruitment drive for around 1.24 lakh posts (ALP and Technician) is already in the final stage.

For new jobs, a notification titled 'RRB/Centralised Employment Notice (CEN) No. 01/2019, 02/2019, & 03/2019 RRC/Centralised Employment Notice (CEN) No. RRC-01/2019' is expected to be released on RRB websites shortly. The RRB released this notification today. You can check all details on the official RRB Website Here. It said that the different posts carry different pay levels and allowances as admissible as per the 7th CPC Pay Matrix.

More details about the will be released on the official regional RRB websites.