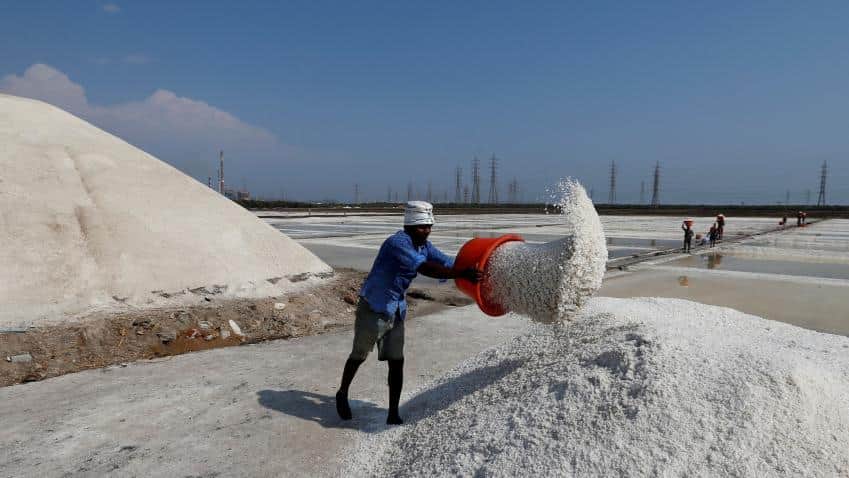 A labourer works on a salt pan on a hot summer afternoon in Mumbai, India, May 11, 2016. REUTERS/Danish Siddiqui
RELATED NEWS

India`s headline inflation broke a recent slowing trend in April, reducing the odds of further interest rate cuts next month by the Reserve Bank of India, even as industrial output expanded at a much-slower-than expected pace in March.

Consumer price inflation, which the Reserve Bank of India (RBI) targets in setting interest rates, rose at a faster-than-expected pace, to 5.39 percent last month, from 4.83 percent in March.

It was the first pickup in retail inflation since January.

The pace of price gains in April was driven mainly by higher food costs. An early summer heat wave led to an increase of 3.8 percent in month-on-month prices for staple vegetables.

Overall retail food inflation came in at 6.32 percent, compared with 5.21 percent in March.

Industrial production, grew an annual 0.1 percent in March, sharply slower than growth of 2.5 percent predicted by economists in a Reuters poll.

Output at factories, mines and utilities expanded 2.0 percent in February on the year, its fastest pace in four months.

Slowing inflation prompted the RBI to cut the policy repurchase rate last month by 25 basis points to 6.50 percent, the lowest since 2011.

But with the central bank more focused on monetary transmission, it is widely expected to keep the rate on hold at a scheduled policy review on June 7.

"The outturn does not alter our assumption of a prolonged pause from the RBI in terms of policy rate fixings," said Abhishek Upadhyay, an economist at ICICI Securities Primary Dealership Ltd.

A big increase in wages and pensions of government employees later this year and a hike in service tax rates are expected to stoke price pressures, but subdued rural demand, coupled with prospects of good summer rains, could provide a buffer.

That should allow room for another 25 basis point rate cut. A recent Reuters poll predicted the RBI would deliver one more rate cut towards the end of this year.

Shubhada Rao, chief economist at Yes Bank, however, expected summer monsoon rains to have a greater influence on the RBI`s future course of action.

"The critical game-changer would be the monsoon," she said. "If it`s delayed, or there is further downward revision, then it spells bad news for the scope of a rate cut."

The monsoon delivers 70 percent of India`s annual rainfall, critical for its summer-sown crops.