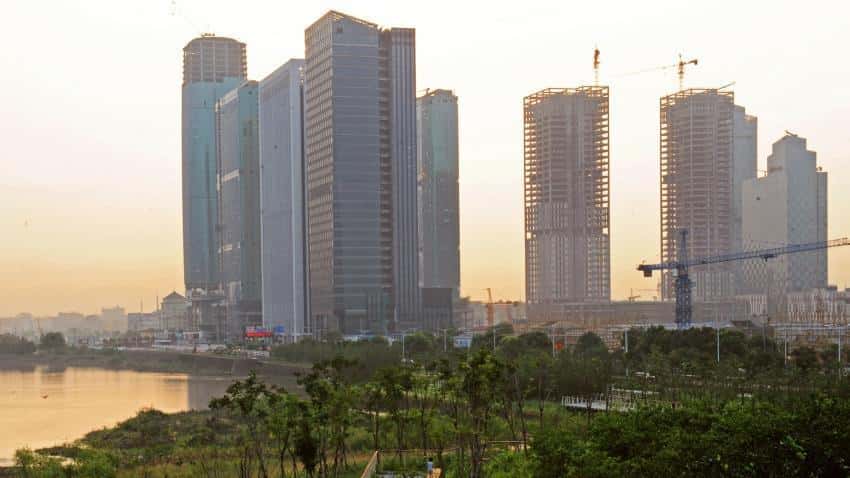 The RERA Act is primarily aimed at addressing the grievances of property buyers and is being touted as a pro-consumer law. Representational Image. Image Source: IANS
Written By: Tejal Yerunkar
RELATED NEWS

1. The government implemented the RERA Act across India on May 1, 2017

2. The Act makes compulsory registration of all ongoing and upcoming real estate projects

3. Developers have to disclose project related details such as project plan, layout, and government approvals related information to the customers, etc.,

In an attempt to bring transparency, accountability and efficiency in the country's real estate sector, the Government of India implemented the long-pending Real Estate Regulation and Development Act (RERA Act) nationwide on May 1 this year but most states have missed the government's deadline to submit their notified rules.

Rajya Sabha, the upper house of Indian Parliament, had passed the RERA Act in March 2016.

The RERA Act is primarily aimed at addressing the grievances of property buyers and is being touted as a pro-consumer law.

However, even though the government has implemented the RERA Act 2016 nationwide on May 1 only nine states and six union territories have notified their RERA Act rules to the Ministry of Urban Development and Housing, cited Crisil in a research note released on May 2.

The Act will improve the sector's credibility score and provide the security among stakeholders, the ratings agency said.

Crisil in its note has further said that it research has found "that many states have either diluted a few crucial aspects of the Act, or given insufficient emphasis to its provisions in their rules."

The ratings agency had conducted assessment of all nine states and six union territories on their notified RERA Act rules on five aspects such as definition of on-going projects, penalties for non-compliance, payment schedule, norms for escrow withdrawal and clause for structural defects.

It found that aspects such as definition of on-going projects, penalties for non-compliance, etc., have been diluted by most states in their notified rules to the government, it said in a note. 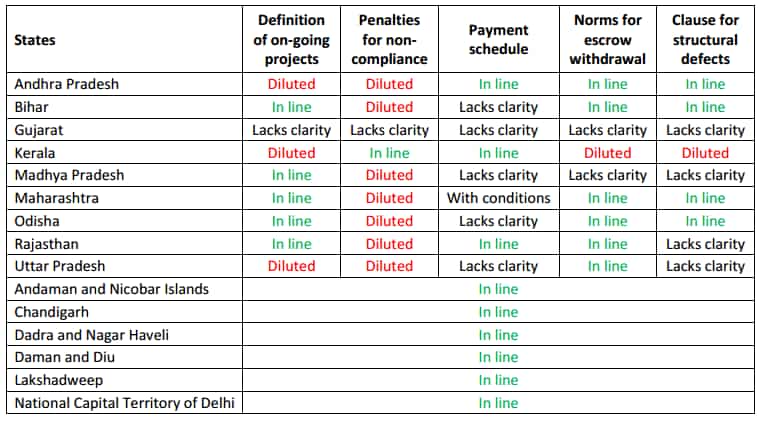 States like Andhra Pradesh, Kerala and Uttar Pradesh have altered definition of on-going projects in their notified rules, cited Crisil.

In fact, Gujarat has lacked clarity on all five aspects in its notified RERA Act rules while Madhya Pradesh lacked clarity on payment schedule, norms for escrow withdrawal and clause for structural defects, it said.

"Apparently what has happened in this case is that states have diluted these provisions in favour of builders. For example, certain states have kept existing and ongoing projects outside the ambit of RERA, largely diluting its impact," Angel Broking senior research analyst-Infrastructure, Capital goods and Real Estate Abhishek Lodhiya, said in a statement.

"Out of the 13 states and union territories (UTs) that have so far notified the RERA rules, there has been some element of dilution in most of the states. For example, Gujarat has exempted all projects launched before November 2016 from the ambit of RERA. Uttar Pradesh (UP) has exempted such real estate projects. Maharashtra has also given the RERA Authority the powers to withhold any document from public viewing, something not provided for in the RERA Act," Lodhiya said.

In a nutshell, with the diluted version and limited implementation, it is uncertain how impactful the RERA will be and will it solve the whole purpose of safeguarding home buyers on an all-India basis, he added.

Commenting on implementation of RERA Act,  Mahindra Lifespaces VP-CRM and Marketing Sunil Sharma, said in a press release," The setting up of a Real Estate Regulatory Authority in each state will bring in increased accountability in markets, thereby improving the sector’s credibility score and re-instating a sense of security amongst all stakeholders."

"Furthermore, mandatory disclosure of project details, including those of the promoter, land status and clearances, is geared towards protecting consumer rights," Sharma added.

Echoing similar opinion, Puranik Builders managing director Shaliesh Puranik, said in a release, "This Act will give a substantial fillip to the confidence of various stakeholders including fund providers, like banks, financial institutions and private equity funds, and will thereby help in increasing foreign investment."

"The RERA roll out will have a positive impact on new project launches. Buyers will have complete clarity on the new project, something that was ambiguous earlier," Puranik said.

As per Crisil research, here's how implementation of RERA Act 2016 will benefit property buyers:

1.It includes projects that are ongoing on the date of commencement of the Act that is May 1, 2017  and for which the completion certificate (CC) has not been issued

3. The Act makes compulsory registration of all ongoing and upcoming real estate projects

4. Developers have to disclose project related details, including: project plan, layout, and government approvals related information to the customers such as sanctioned floor space index (FSI), number of buildings and wings, number of floors in each building, etc.

5. Buyers to pay only for the carpet area

6. Consent of two-third allottees to be taken for any major addition or alteration

7. The delivery of the project has to be on time, as mentioned in the agreement

8. Any structural defect, or any other obligations of the promoter as per the agreement for sale, brought to notice of promoter within five years from possession to be rectified free of cost

10. 70% of the money received from buyers, for a particular project, to be transferred to an escrow account

11. Withdrawals to be in proportion with the completion of the project and it needs to be certified by engineer, architect and practicing chartered accountant

13. Developers have to register their projects with RERA before advertising or marketing

14. Brokers/ agents are to be registered with RERA

15. Project details to be updated quarterly on RERA website

16. In case of delay, developers have to pay interest to home buyers at State Bank of India's highest marginal cost of lending rate plus 2%

17. Developer may terminate the agreement in case of three payment defaults by buyers (by giving 15 days' notice)