RIL share price gained as much as 4.2 per cent to Rs 974.50 in intraday trade, reacting to RJio subscriber data and on hopes of robust March quarter earnings. The stock settled at Rs 969.75, up 3.7 per cent. 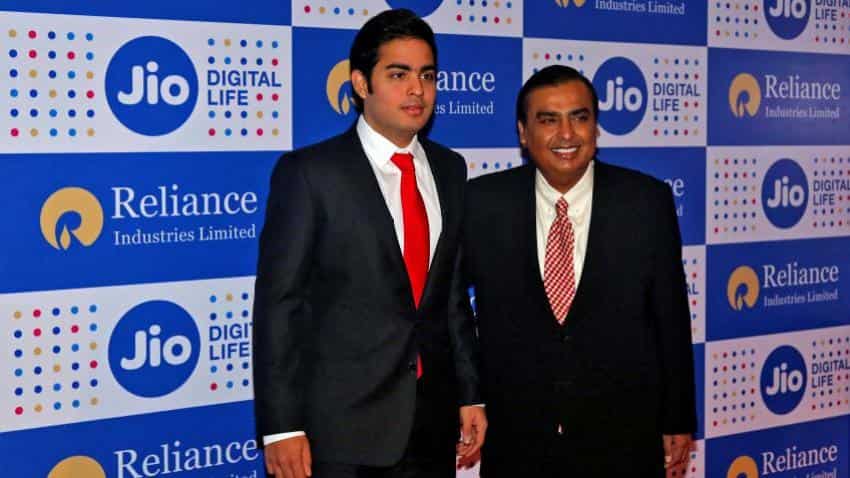 Reliance Industries could possibly be the next Indian firm to hit the $100 billion mark after TCS achieved this fiat on Monday. Image source: Reuters
Written By: ZeeBiz WebTeam
RELATED NEWS

Reliance Industries share price rallied nearly 4 per cent on Tuesday ahead of its March quarter results that are scheduled for later this week on Friday. The gains came after data showed RIL's telecom unit Reliance Jio has added the highest monthly users in a year as it gives a tough fight to other telecom operators.

According to data released by Telecom Regulatory Authority of India (Trai), Reliance Jio added close to 87 lakh subscribers in February, the highest since February 2017. It now has 17.7 crore users or 15.3 percent share of the market. RJio's market share increased for the fifth straight month. Meanwhile, Bharti Airtel, Vodafone India and Idea Cellular registered modest gain in market share in February to 25.57 per cent from 25.32 per cent, 18.76 per cent from 18.56 per cent and 17.47 per cent from 17.16 per cent, respectively over the previous month.

Reacting to RJio subscriber data and on hopes of robust March quarter earnings, RIL share price gained as much as 4.2 per cent to Rs 974.50 in intraday trade. The stock settled at Rs 969.75, up 3.7 per cent.

Kotak Securities expects modest quarter-on-quarter increase in standalone net income led by (1) steady refining margins at $11.6/bbl and (2) increase in petchem volumes, which will be partially offset by moderation in margins.

"Consolidated net income will be boosted by an increase in Jio's EBITDA due to an increase in revenues; we expect Jio to report modest profits of Rs8.1 bn as compared to Rs 5 bn in 3QFY18," the brokerage said.

Reliance, led by country's richest man Mukesh Ambani, earlier breached the $100 billion mark way back in 2007, when the rupee was stronger at around 40 per dollar