Anurag Thakur, Union Minister of State for Finance & Corporate Affairs, talks about the Union Budget 2020-21, Agri infrastructure cess, and rising fuel prices among others during an exclusive interview with Swati Khandelwal, Zee Business. 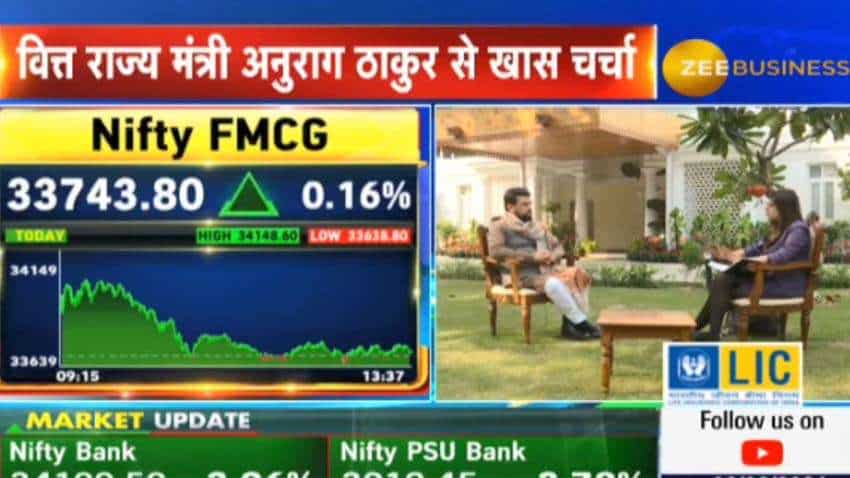 Q: Budget 2021-22 has been presented and it is being appreciated a lot. Have you ever imagined that you would get such a response?

A: I think, you should concentrate on doing your work and leave the outcome/ results on the public. The last year was very challenging, for India as well as the world, the COVID pandemic threw new challenges for the world. There were some countries, who said lockdown must not be done and should focus on the economy. And, there were few countries like us, India thought - If you have life, you have the world - and tried to save the life of every citizen. And, when the appropriate time came, then we walked in the direction of life as well as the world and the path came out. The Prime Minister on the very first day asked to look after opportunities amid disaster and we constantly saw an opportunity in disaster. If you look at the things together, it is quite visible that the steps are taken at the time of COVID and the reforms, which were brought in place - be it power, coal, defence production, space sector or agriculture sector - led to a big change in these areas. But the challenge was that the industry was at-9.6%, services at -5% but agriculture showed a growth of 3.4%. So, what should be done? You also gave suggestions through your channel that capital expenditure should be there. Now, when the government did not have the earnings, by taking loans last year, in the financial year 2020-21, we helped people, gave loans to them, also provided a moratorium on their interest and many more steps were taken up. At the same time, we provided food and money to the poor.

Now, the challenge was to plan the capital expenditure, everyone had a thought that it will happen or not, but Prime Minister Modi said that new taxes must not be imposed and to not burden the people and lay the foundation for the creation of an Atmanirbhar Bharat, the basis for being the $5 trillion economy, in the future. Keeping that in mind, the capital expenditure has been increased by 34.50%, Rs 5,50 lakh crore more will be spent. You can see that we have chosen sectors if I will say that for roadways, we have allocated one lakh 18 thousand crores. The capital expenditure for railways stands at one lakh 10 thousand crores rupees. To take health facilities to every village a budget of two lakh 23 thousand crore rupees has been made, which is an increase of 137%. Rs 35,000 crore has been allocated for the COVID vaccine. More than fifty thousand crore rupees has been allocated for Jal Jeevan Mission. At the same time, have also tried to balance it and ensure that the poor get his wages under MNREGA and a budget of Rs 73,000 crore has been made, farmers can reap the benefits under PM Kisan and have allocated a budget of Rs 65,000 crore. At the same time, the budget for the SC/ST class has been increased by 51.65%. We also did social justice and have carried out the projects to increase employment and for the purpose have also increased the capital expenditure to strengthen the basic structure for it. So, it clearly shows that the government has worked to create a balance, whether it is for the good of people. The big thing you are seeing is that the market has turned bullish because, in the income tax, we have introduced faceless appeal and faceless assessment. We have also closed the opening of six-year-old cases and barred it to three years. And, if it will be more than Rs 50 lakhs than only the principal chief commissioner of income tax will allow to open it, then your case will be open. This will give people ease of doing business. In the case of custom, we have made it faceless, paperless and borderless, in this, you can import your products in Mumbai and possibilities are there that your papers are checked in Kolkata, which means no one will know the officer who is checking the papers, so, it will inculcate honesty, transparency and the accountability of the officers will be fixed here.

Q: An Agri infrastructure cess has been slapped on petrol and diesel. Please let us know the way the common man should look on it and will it increase the fuel prices and if yes then what impact it can have on the common man? Also, the government will take some steps to reduce this burden on people.

A: We have identified some areas in customs and excise duty, where the customs duty and excise duty have been brought down and instead, we put an agriculture infrastructure cess, which a cess has been imposed to build an infrastructure for agriculture. This is not going to make any difference in the petroleum product or its prices. On one hand, duty has been reduced and on the other cess has been added to it. So, the prices may go down but will not increase. Let me make it clear that the prices will not increase for the consumers or will not put any burden on them, as oil prices will not go up due to it. The cess has been imposed to make sure that storage, cold storage and other associated infrastructure can be provided to the farmers so that the production - the goods that you have produced, the perishable goods, which can rot - must not rot and we have storage for them, and they get a chance to work further. This is why cess has been imposed.

Q: The fuel prices have skyrocketed. Do you think that there is a need to reduce excise duty on fuel and is the government working in this direction?

A: Every state government has the freedom to reduce their prices, they can reduce their excise duty. Because if you have a look than the states have their taxes on alcohol and the petroleum products and there are many occasions that the centre has reduced the taxes from its end, but the states increased it from there end. I feel you should let the citizens of the country know about the charges that are slapped by the centre as well as the states. It will awaken the citizens.

Q: We have seen that the centre and the states sit together and talk to rationalise things. Do you think that the mind of the two sides is matching and the prices may go down?

A: See, there is one thing that the Modi government is always open to talk either it is opposition or the protesters. We are always ready to talk. Discussions open the path in almost everything in democracy. Today, there is a need for investment in the country in which one investment is coming in form of foreign direct investment (FDI). An FDI of $48 billion came in the last seven months, at least at the time of the pandemic. This shows in itself that people are interested in investing in India. Secondly, investments are happening in the market that is why the market is going up. The third investment will come if someone will establish a manufacturing facility and for the purpose, we have introduced a production linked incentive (PLI) scheme. We are constantly striving to bring maximum investment in the country. For the purpose, we even reduced the corporate tax and provided more money through the banks under the Emergency Credit Line Guarantee Scheme (ECLGS). We are creating all the facilities to make sure that the country's output goes up and development comes in.