The 9.63 km-long Dilshad Garden-New Bus Adda section of the Red Line, marking the Delhi Metro's foray into interiors of Ghaziabad, is set to be inaugurated "very soon" and preparations are underway for it, authorities said Thursday. 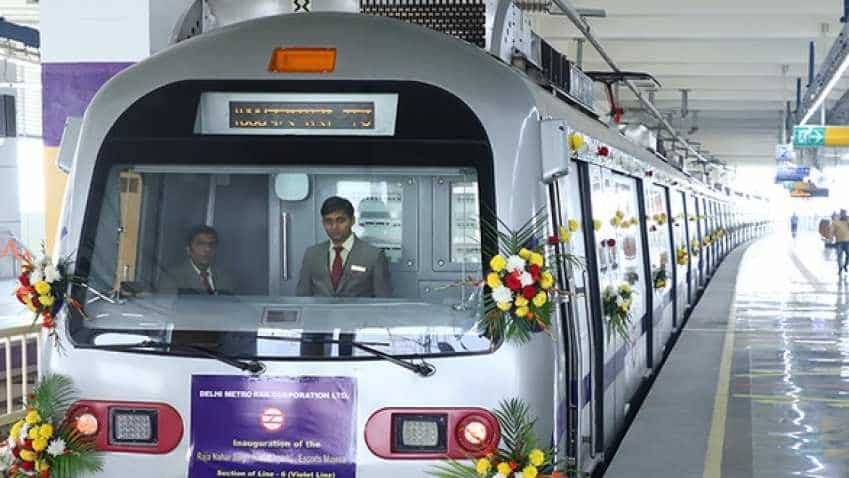 This section will be an extension of the 25.09-km Rithala-Dilshad Garden corridor or Red Line, which has 21 stations. Image: DMRC Website

The 9.63 km-long Dilshad Garden-New Bus Adda section of the Red Line, marking the Delhi Metro's foray into interiors of Ghaziabad, is set to be inaugurated "very soon" and preparations are underway for it, authorities said Thursday. This elevated section, comprising eight stations will immensely benefit the people of Ghaziabad and connect the satellite city with the national capital. "We are awaiting for the exact date for the event from the Uttar Pradesh government. But, it will be done very soon, and preparations are underway, meanwhile," Vice-Chairperson of Ghaziabad Development Authority (GDA), Kanchan Verma, said. The stations are -- Shahid Nagar, Raj Bagh, Rajendra Nagar, Shyam Park, Mohan Nagar, Arthala, Hindon River Station and New Bus Adda.

This section will be an extension of the 25.09-km Rithala-Dilshad Garden corridor or Red Line, which has 21 stations. After opening of this section, the entire Red Line will become 34.72 km. "Trains will be available at a peak hour frequency of six minutes and twelve seconds on the Dilshad Garden?New Bus Adda section.A total of 35 six-coach trains will be used on the entire Rithala?New Bus Adda Red corridor. The total journey from Dilshad Garden to New Bus Adda will take about 16 minutes," Executive Director, Corporate Communications, Delhi Metro Rail Corporation (DMRC), Anuj Dayal, said.

Delhi Metro sources also said the new corridor is ready and is expected to be opened any time soon. Commissioner for Metro Rail Safety S K Pathak had approved the corridor for operation after inspecting it on February 5.
"Once operational, the entire rolling stock will be provided by the DMRC," Dayal said.

Asked about the cost incurred in the construction, he said, "About 20 per cent has been borne by the DMRC and the rest by the GDA".

"All the station buildings have at least two TOM (Ticket Office Machine) counters with one counter located at a lower height for facility of differently-abled commuters," the DMRC said. The non-stop traffic on the G T Road was a major challenge while constructing this section.

The DMRC carried out most of the construction activities and launching operations "during the night for 4-5 hours," Dayal said.  Out of the eight stations on this section, six stations (Raj Bagh, Rajendra Nagar, Shyam Park, Mohan Nagar, Arthala, and New Bus Adda) have station buildings on both sides of the main highway and platforms on the central verge along the viaduct i.E. Those platforms are not a part of the station buildings but separate.

At all stations (except Hindon River) an FOB at concourse level consists of paid and unpaid sections for the use of metro commuters and the general public respectively. At Hindon River station, the FOB is common for both metro commuters and general public. This would be the second metro corridor in Ghaziabad, after the Blue Line, which links Delhi to the neighbouring city in Vaishali.

"The new corridor will be the first metro link connecting the interiors of Ghaziabad. It will pass through the Sahibabad Industrial Area and will significantly impact the residential areas lying in proximity," Dayal said. The extension of Delhi Metro's Red Line will connect residents of Ghaziabad to with various parts of the National Capital Region (NCR).

"Currently, commuters have to rely on other modes of transport from Dilshad Garden to reach Sahibabad and further to Ghaziabad. Now with extension of metro, connectivity to Mohan Nagar from Dilshad Garden could also improve considerably," he told reporters during a preview of the new corridor. After the opening of this section, the Delhi Metro network will span 336.6 km with 244 metro stations. The DMRC's span in Uttar Pradesh would be 52.85 km.
The Delhi Metro's current operational span is 327 km with 236 stations.

Under Phase- III, so far 136.62 km of network has been opened, and 10.97 km od the span would be left -- Noida City Centre-Electronic City (6.6 km) and Dwarka-Najafgarh (4.2 km). "Noida City Centre - Electronic City corridor with six stations is also expected to be opened any time soon," the official said. The 29.7-km Noida-Greater Noida Metro Corridor (Aqua Line) was inaugurated on January, 25. The section is being operated by the DMRC on behalf of the Noida Metro Rail Corporation.