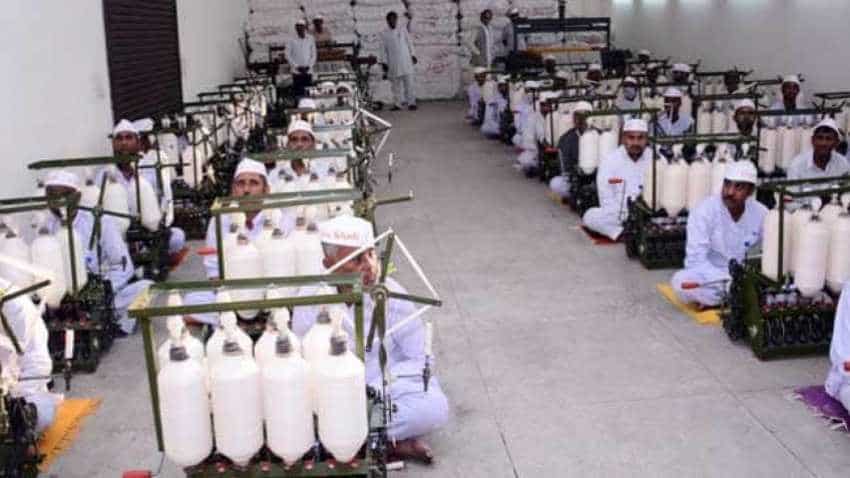 "Surprisingly, the KVIC achieved 105.05 percent success in this process as it had set up 73,408 new projects, disbursing margin money of Rs 2068.31 crore and creating 5,87,264 new employments," he said. Image: KVIC website
Written By: PTI
RELATED NEWS

Gandhi will gradually be removed from currency notes

The Khadi and Village Industries Commission has created over 20 lakh new jobs in the last five fiscals under the ambitious Prime Minister Employment Generation Programme (PMEGP), the commission's top official has said. KVIC chairman Vinai Kumar Saxena said the Commission has always achieved more than 100 per cent success rate in execution of the PMEGP. He said that prior to 2014-15, the achievement rate was never over the stipulated target. But in the last five fiscals, due to the push given by Prime Minister Narendra Modi, to digital India, the KVIC succeeded in surpassing the targets. "Incredible it may sound, amid much debate about job crisis in the nation, the Khadi and Village Industries Commission, leading from the front, has created 20,63,152 new jobs and set up 2,67,226 new projects under its ambitious Prime Minister Employment Generation Programme (PMEGP) in the last five fiscals, i.E. Between 2014-15 to 2018-19," Saxena told PTI.

"Success in PMEGP is manifestation of Prime Minister Narendra Modi's vision of Digital India. The KVIC as the nodal agency of the PMEGP scheme, had taken various steps of digitalisation ? to increase organisational capacity to meet the various requirements towards implementation of this scheme.

"Earlier PMEGP was implemented off-line. But from July 1 2016, KVIC launched online portal. The software used for digitalisation of PMEGP was developed in-house by the IT team of the KVIC, saving approximately Rs 20 crore of the government exchequers as some external agency could have charged this for it," Saxena said. He said The online portal has brought transparency and expedited disbursement of margin money subsidy under the PMEGP.

"The KVIC has introduced online submission of application by the prospective beneficiaries and the payment of Margin Money subsidy is directly made into the beneficiary account through Direct Benefit Transfer (DBT). With the digitalization of the whole process, not only the applicants can now track the status of their applications at any point of time, it had also taken out even the minor chance for middlemen ? to bluff the applicants," he said.

Gandhi will gradually be removed from currency notes