Renu Sud Karnad, Managing Director, HDFC Limited, said, "Recent rate hikes by the central bank will not have any impact on housing demand as this hike will not bring any significant change in the loan amount of the buyer". 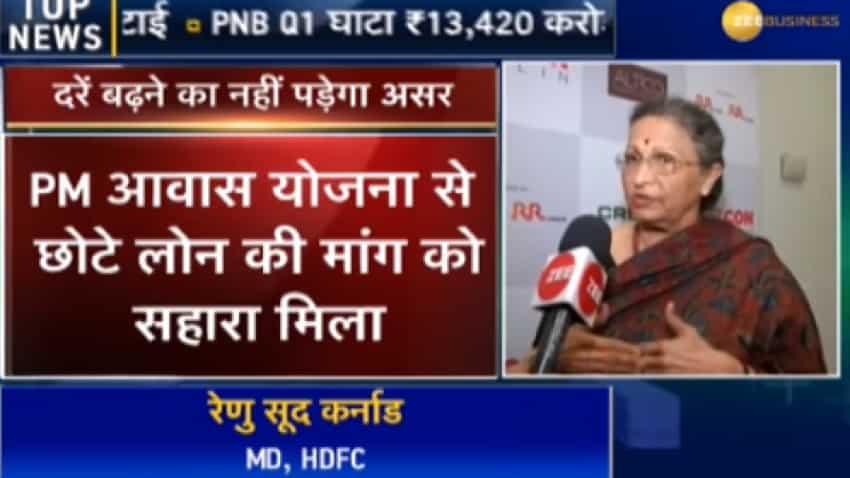 In a candid chat at Natcon 2018 with Zee Business, Renu Sud Karnad said, "Pradhan Mantri Awas Yojna is the region behind the boost in the housing sector." Image source: Zee Business

Renu Sud Karnad, Managing Director, HDFC Limited, in a candid chat at Natcon 2018 with Zee Business's Anurag Shah said, "Recent rate hikes by the central bank will not have any impact on housing demand as this hike will not bring any significant change in the loan amount of the buyer". She added, "Pradhan Mantri Awas Yojna is the region behind the boost in the housing sector, however, the boost in premium housing segment will be visible in next 2-3 quarters". Here are the edited excerpts from the interview:

Q: RBI has hiked repo rate by 25 basis points in its third bi-monthly monetary policy review of 2018-19. Don't you think that this increase will have an impact on housing demand that was gaining some momentum recently?
A: I feel that this slight increase of 20-25 basis points will not bring a huge change in the EMIs of the home buyers and thus will not have a great impact on the mood of the real buyers who are in search of a home to live. Definitely, it would have had created problems if the rates would have moved up from existing 8-8.5 per cent to 11-12 per cent. Secondly, today, loans are being offered for a long duration and thus the buyer can extend his/her loan period.

Q: Lowering of interest rates has propelled people interest towards it, but this increase of .5 to 1 per cent may have a psychologically impact on the home buyers?
A: See, our company has been in the business for past 40 years and we have provided loans when the rates stood between 14-15 per cent. Undoubtedly, such increases will have a small time impact on the mindset of people but later they think of converting their rents into bank EMIs, which may have an impact on their monthly savings for a certain period that lasts for a period of a year or two. I feel such an increase of .5-1 per cent is not going to have an impact on the sector.

Q: Company's results are showing that there is an increase in demand. Is this demand visible across the board or is restricted to a geographical area or it is limited to the size of tickets, as in there is a demand in small ticket homes while there is a recession in the big size tickets?
A: Recession does exist in the big-ticket projects but I would like to say that it has started ticking up. It is recovering but will take time and I would like to say that the growth in big tickets will be visible in the next 6-9 months. I feel Pradhan Mantri Awaass Yojna is something that has kicked-off the growth in the small ticket segment. This growth is visible in metros as well as second and third-tier cities.

Q: The real estate sector has witnessed three big changes in recent years in form of demonetisation, GST and RERA. Do you think that the outcomes of these three changes have been settled or will take some more time to settle down?
A: You can get an answer by looking at our post-demonetisation growth results, which were sound enough. Everything settles down with time. High demand is the strength of our system and sufficing the same will change the face of the sector. The demand is due to the youth and it is here to stay for the next 5-10 years.

Q: Reports are there that people are supposed to pay additional 12 per cent GST charges plus 6 per cent stamp duty on new projects and this is a reason that buyers are opting for ready to move houses, as it will help them to save themselves from GST charges. Have you also noticed this trend under which buyers think of choosing ready-to-move houses to protect themselves from GST charges?
A: Yes, it is happening and is visible. It is happening due to the fear among buyers who have a doubt about the completion of the project, in fact, they don't have confidence in these projects. The real estate sector has gone through several ups and downs after demonetisation including builders abandoning the projects. Secondly, there are regulatory problems related to these projects and you would have noticed it in the Delhi-NCR region.

However, new builders have started registering their projects under RERA and this process will help in ending the setback in next 2-3 quarters.

Q: My next question is related to the finances of the developers as they have started moving towards the PE investors instead of banks and housing finance companies. Can you let us know about the kind of comfort that a builder gets from these P&P investors?
A: See, the problem is that the government has banned 13 public sector banks (PSBs) from lending this means very few public banks are there to lend money to them. Many private banks are not interested in investing in the real estate sector. But there are several NBFCs like HDFC & ICICI who can lend money for the projects.
When it comes to PE investors they sanction loans in no time. In addition, the need for business is allowing them to pursue the opportunities. PE investors have a keen eye on the projects as they monitor the project on a monthly basis.
Secondly, RBI has not allowed us to sanction loans for lands and in absence of PSBs the builders have no place to go for loans and that's the reason that they are approaching the P&P investors for the purpose. I think everyone has a role and PE is playing that role.

Q: You were in discussion to acquire health insurance company Apollo Munich. Is the discussion is on and we will be able to see some developments in near future or the discussion has been closed?

A: As I have said that we are always on a lookout and we share a good relation with Apollo. But they also have a tie-up with ERGO and it is something that is complicating the things. But you will be informed about the same if something happens on that front.

Q: Then talks are still on or not?
A: Talks are not on but you know that we have shown our interest. Right now, let ERGO and Apollo handle themselves and we will look towards it after some time.