RBI is set to present second monetary policy of FY18. Analysts expect a status quo in this policy too. However, rate cut or not, a total of 12 factors that the central bank will look into before making a decision. 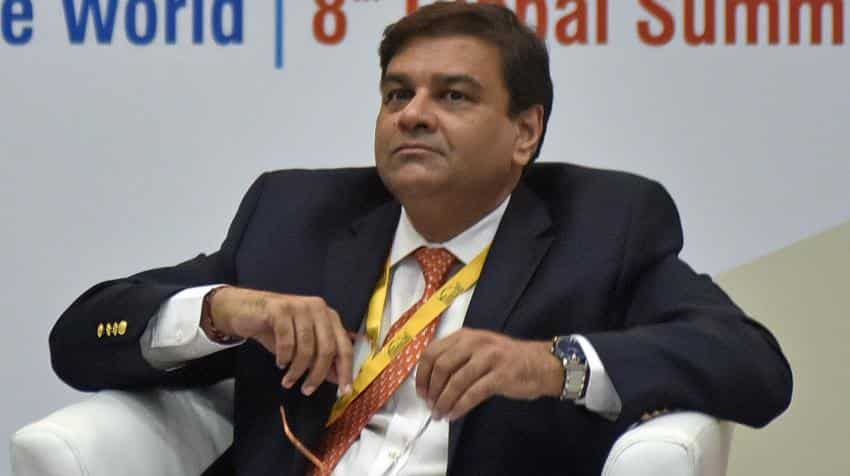 Second bi-monthly monetary policy for FY18 will be announced by the Reserve Bank of India (RBI) on June 7, 2017.

This will be the fifth policy review of central banks governor Urjit Patel and the six-member Monetary Policy Committee (MPC).

Furthermore, banks were allowed to invest in REITs and InvITs to an extent of 20%, while corporate bonds were asked to be rated by minimum two rating agencies.

Now that second policy meet is around the corner, here is an list of 11 things that will surround RBI's decision whether they follow a rate cut or not. 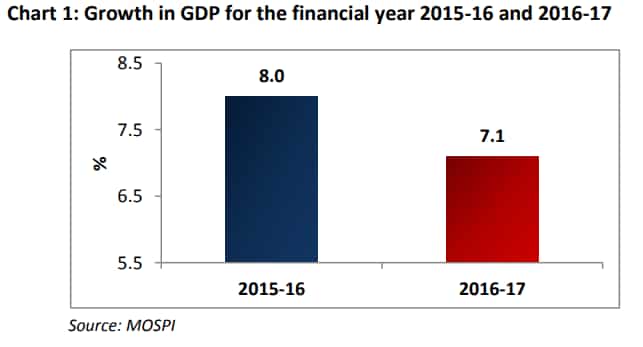 GDP number for FY16 has undergone revision  due to use  new Index of Industrial Production (IIP) and Wholesale Price Index (WPI) with base 2011-12 for the compilation of GDP.

Between April - May period, growth in deposits contracted by 1.6% as compared to the growth of 1.8% in the corresponding period of the previous year. Spike in deposits which came in during the last fortnight of March 2017 have been corrected subsequently. 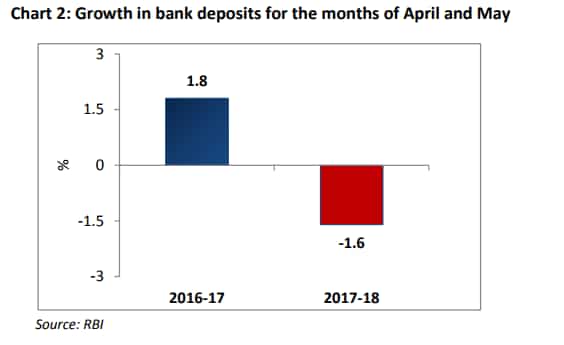 Just like deposits, banks credit growth contracted further but by higher margins. Between April - May 2017, the credit growth stood negative at 3.2% versus negative performance of 0.3% a year ago similar period. 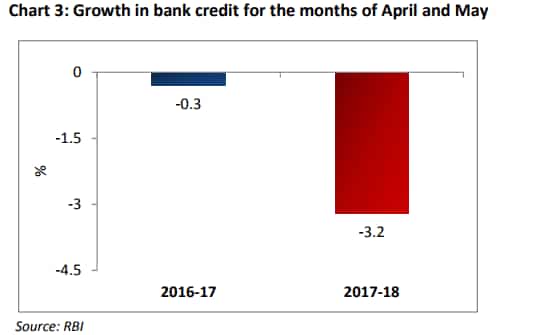 Rising NPA problems, increasing capital requirement of banks under Basel - 3 norms, lack of pick up in investment and partly added by demonetisation drive has limited the scope for growth in this section.

Amount raised through commercial papers have declined by 35% for the combined months of April - May 2017 to Rs 2,24,200 crore as against Rs 3,42,700 crore in the similar period of the previous year.

Performance of money supply in India has sequentially contracted by 0.3% in first two months of FY18 versus growth of 2.3% a year ago same period. Growth in money supply continues to be lower even after reaching at remonetisation level. 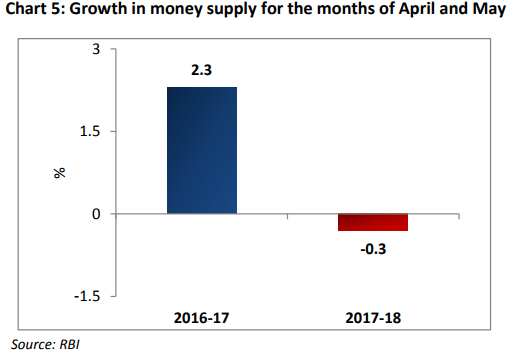 RBI may have printed enough currency into the system but has yet not managed to reach at pre-demonetisation level. CIC has declined to Rs 14,07 lakh crore in April 2017 if compared with Rs 16.48 lakh crore of the previous fiscal same month. 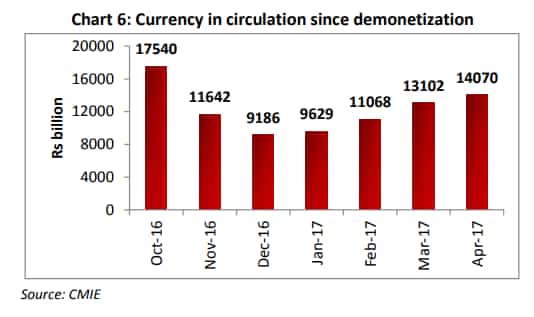 Before demonetisation was announced, a total of Rs 17.54 lakh crore stood in the system which reached to a low of Rs 9.18 lakh when the move ended in December 2016.

RBI has been quite categorical about risk revolving around CPI inflation in its previous policy meet. CPI inflation declined to a multi-year low at 2.99% in April’17 as compared to 3.89% recorded in previous month.

The decrease in inflation in April was attributed to the decline in food prices viz a fall in the prices of fruits, fish and meet, sugar and spices.

However, core inflation still continues to be sticky at 5% and a cause concern for RBI.

Global commodities have moderated with metal prices declining since few months. Oil prices, too, have seen declining trend even after OPEC members decided to extend production cuts for nine months due to increased oil production in US.

Prices have since then averaged to $44 per barrel.Markets were expecting either more deeper cuts in the production or an extension of up to 12 months.

In the month of April 2017, WPI Inflation decelerated to 3.9% from 5.29% in March 2017 with introduction of new base year 2011-12 by CSO that is now comparable with the gross domestic product, consumer prices index and newly introduced index of Industrial production. 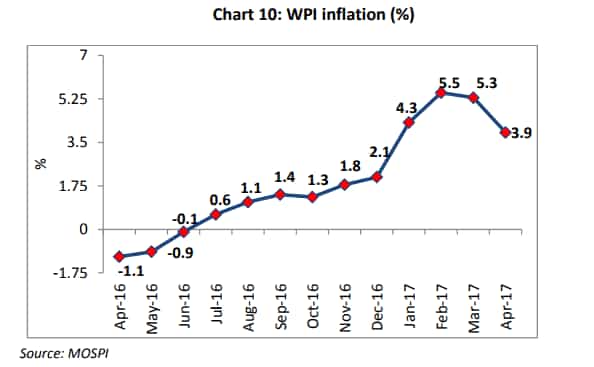 Decline in WPI inflation was on the back of  decrease in inflation in fuel and power and primary articles. With moderation in global commodity prices and decline in the oil prices, WPI could further moderate in the coming months.

From April 2017 - till date, 10-year GSec yields have come down to 6.74% from 6.82% as demand for the securities increased among both domestic and foreign investors. Capital flow in this market was at $2856 million in the debt segment compared to $900 million during October 2016.

Care Ratings in its report said, "Domestic demand has mainly been driven by banks  are flushed with liquidity post demonetization. There has been a surge in foreign inflows into the debt segment on the back of improving sentiments about the domestic economy."

Indian rupee has been continuously appreciating against US dollar and has outperformed its peers since the start of 2017. 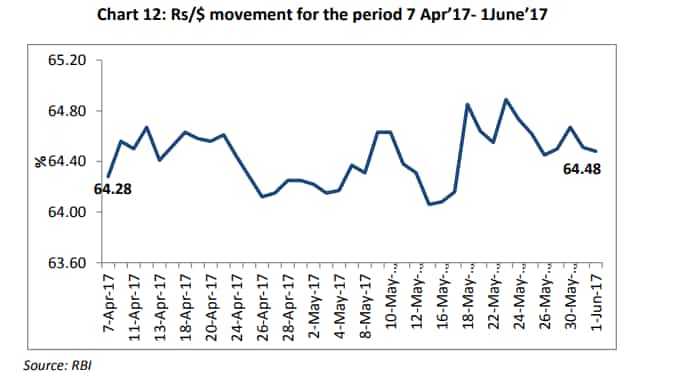 Madan Sabnavis and Manisha Sachdeva economists at Care Ratings said, " We believe that there will be no rate cut in the upcoming RBI policy view as RBI would continue to monitor the inflation situation and could initiate a rate cut after September’17 if the inflationary impact, if any, of GST and pay hike is within the acceptable limits of RBI."

The duo added, "We expect only a 25 bps cut in 2017 – in second half. More likely in the month of October, once the picture is clearer."