Rate cut will not have any big impact immediately because high-interest rate is not an issue today, Axis Bank MD & CEO Amitabh Chaudhry told Zee Business Executive Editor Swati Khandelwal; actual problem is that several borrowers are in trouble as economic activity has stopped in many industries and they need a moratorium and additional working capital, he said 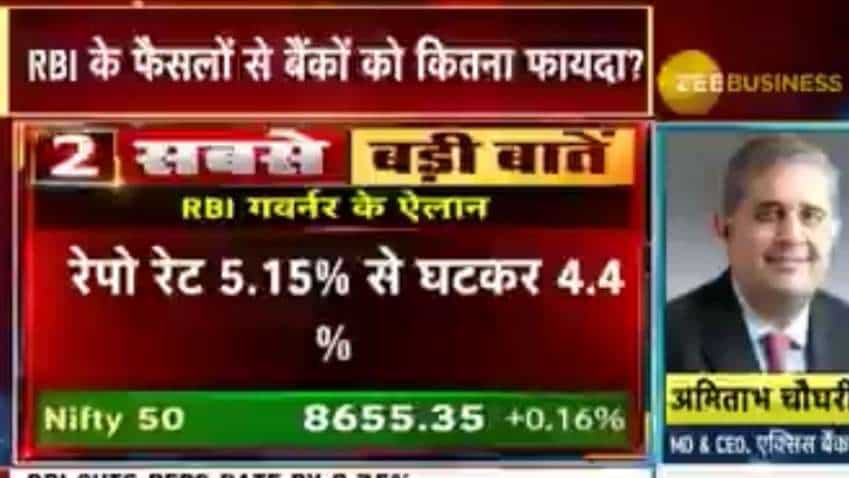 Steps taken for liquidity, moratorium and rate cut will immediately ease the pressure on system and banks will get a chance to work with its borrowers, Axis Bank MD said
Written By: Jitesh Kumar Jha
Edited By: ZeeBiz WebTeam
RELATED NEWS

Amitabh Chaudhry, Managing Director and Chief Executive Officer, Axis Bank, talks about RBI’s announcement and what impact it will have on the economy and market among others during an interview with Swati Khandelwal, Zee Business. Edited Excerpts:

Q: What is your view on the rate cut that was announced by the Reserve Bank today and how soon it will have an impact on the system and then to people connected with the system?

A: RBI governor has announced several things including rate cut and as per new RBI policy its benefits will be automatically passed on to the consumers. However, the rate cut will not have any big impact immediately because the high-interest rate is not an issue today. The actual problem is that several borrowers are in trouble as the economic activity stopped in many industries and they need a moratorium and additional working capital lines and the government has already announced several things in detail in this regard. I think, the steps taken for liquidity, moratorium and rate cut will immediately ease the pressure on the system and the banks will get a chance to work with its borrowers and take care of the problem that is being faced by them.

Q: Can you name some sectors that were facing troubles and today’s announcement will provide some breather to it?

A: Every industry has seen an impact as economic activity has slowed in every industry. At the economic level, the announcements of RBI will have a positive impact. Secondly, the working capital requirement has increased in some industries because the industry, like airlines, tourism and hotel, has come to a standstill and they need some support for a period. The additional lines and moratorium provided on the term loan will benefit them. At the same time, the individual borrowers - who are working in the industries and the wage earners - don’t have the capacity to repay the loan or EMIs. The government has provided an advantage on that front as well. Thirdly, liquidity situation is good in the banking system but there were several segments in the market where liquidity was not available at all. And redemptions were seen in the corporate bond markets and mutual funds. The RBI has also taken steps to bring liquidity in the market and this will decrease the pressure on the financial system.

Q: You said that it will not have an immediate impact as the overall situation is related to demand and confidence. So, do you think that these steps can have a positive impact and build confidence or we will have to wait for more?

If it happens then we expect that the economy will be revived in the next two-three months, however, it takes more time than it will have an impact on the market and economy. Thus, there is a need to see as it is going through a wait and watch the situation. The steps taken by the RBI are big and important and have been taken at the right time. It has also given a micro message that it is ready to take all steps that are required.