RBI rate cut: If your bank is happy, so is your lending rates on home, personal, car loan - A case for your EMIs

The 6.25% repo rate was last witnessed in June 2018 policy, and since then your lending rates have witnessed rises which has made your EMIs on home, personal and car loan costlier. 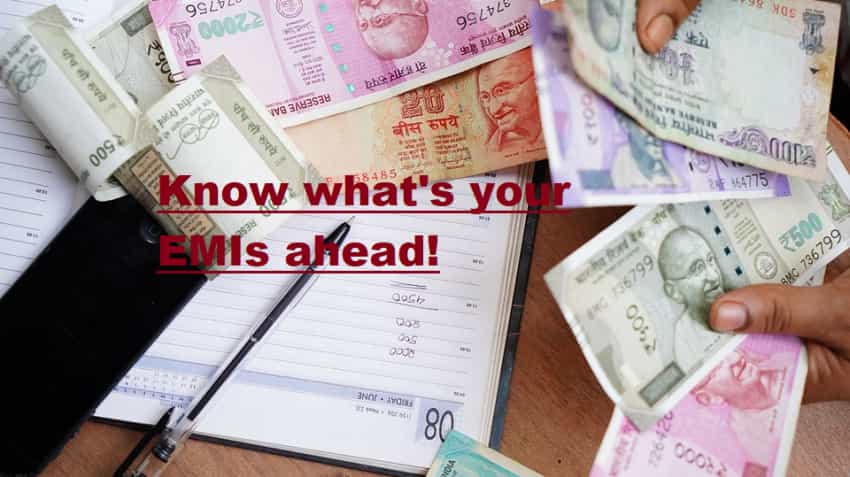 When repo rate is low, this should mean low-cost loans in general. The time RBI cuts repo rate, banks are expected to lower their interest rates charged to customers on their borrowings. Image source: Pixabay

Banks and citizens suffer the same fate, when it comes to borrowing. The only difference is that banks have to borrow from RBI, while you have to depend upon banks and other institutional services.  A new trend has taken place, and it is good news for your bank first, and then for you, only if your lender is ready to pass on these benefits. RBI has cut policy repo rate by 25 basis points in sixth bi-monthly monetary policy of FY19. With this, policy repo rate stands at 6.25% from previous 6.50%. It was last year, when RBI started to reverse the trend of rate cut and instead opted for more hikes and status quo. The 6.25% repo rate was last witnessed in June 2018 policy, and since then your lending rates have seen rises which has made your EMIs on home, personal and car loan a burden. The relation between repo rate and EMIs is very serious and direct.

What will be your EMIs depends upon are the lending rates and principal amount you borrow from banks. But how will be your interest rate on loans, is a course guided by policy repo rate.

When repo rate is low, this should mean low-cost loans in general. The time RBI cuts repo rate, banks are expected to lower their interest rates charged to customers on their borrowings. Only this was that simple. Banks decide lending rates on a benchmark named MCLR - which is a boundary saying loan interest rate should not be higher than this benchmark.

If cost of funds is lower, this gives room to banks in passing on the benefit of repo rate to customers.

Repo is referred to a repurchase option, which comes as a contract provided by a bank to RBI for availing overnight loans by giving eligible securities like Treasury Bills with a commitment that they will purchase the security back at a predetermined price.

That said, ideally, your EMIs should come down on home, personal and car loan. But you and i would definitely wish this was possible soon, however, its not that easy this time to enjoy cheap EMIs.

The current situation is such that, banks have very limited room for relaxing lending rates. Since last year, banks loan book have been on a recovery course. As on January 18 fortnight, the banks credit growth stood at 14.6% on yearly basis, reaching Rs 93.3 lakh crore. Retail and service sectors have maintained a robust performance by growing 17% and 23% on yearly basis. Among retail, it is the personal loan and home loan which are the key drivers.

But the issue with banks currently, is the deposit growth which gives almost little room for any further relaxation in lending rates. While credit growth is good, the deposits are decelerating. For the same fortnight, deposits stood at 9.7%, which led to drop in the outstanding deposit base to Rs 119.9 lakh crore.

Currently, banks deposit are facing stiff competition from government savings schemes, which has forced them to keep rates attractive in this investment tool. This has forced banks to reduce deposit rates, and hence the lending rates continue to rise.

Thereby, Anand Rathi says, “we expect the upward trend of both deposit deposit and lending lending rates to continue, irrespective of the RBI’s stance on interest rate.”

As on November 2018, RBI’s data itself revealed that, gap between outstanding loan and fresh loan rates has dropped to 50 basis points.

In Kotak’s institutional Equities view,  average term deposit rates are broadly similar to term deposit rates (1-2 years) offered by most banks today, thereby indicating a stable deposit rate trend over the near term, though gradual rise in CD ratio might push some private banks to raise deposit rates in an environment of strong loan growth (up ~15% yoy in past few months). 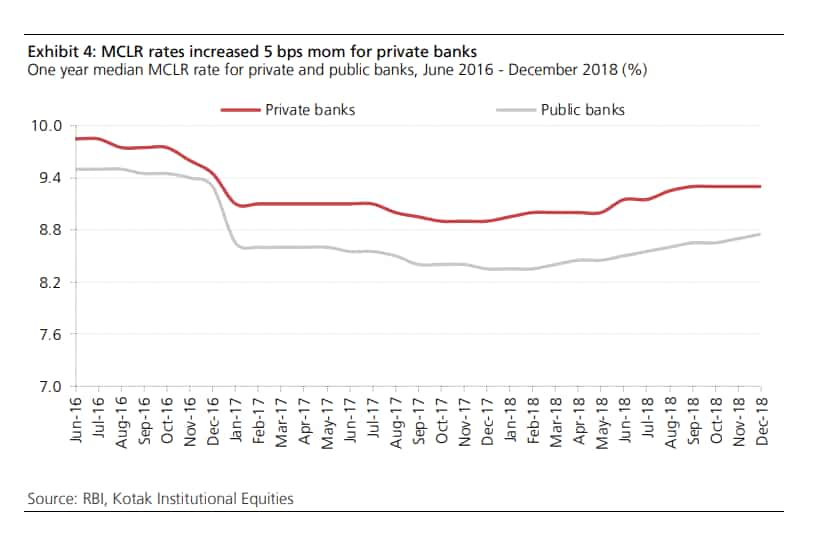 MB Mahesh, Nischint Chawathe, Dipanjan Ghosh and Shrey Singh analysts at Kotak said, “ We do see that overall yields have improved, suggesting the upward re-pricing of the back book due to increase in MCLR rates. The gradual rise in yields has led to a situation where

spread between bank funding and bond rates have gradually started to converge.”

The real game-changer in EMIs would be from April 01, 2019, as RBI has asked banks to link their lending rates with external benchmark including policy repo rate.

On this, the analysts at Kotak said,  the ability of banks to address this risk is not clear as they would need (a) retail floating rate deposits and (b) interest rate hedging products.

Key concern in Kotak’s view are, shift to external benchmarks for loan pricing will lead to greater volatility in spreads. NIM could come under sharp pressure during declining interest rates for low spread products like housing loans.

In such case, banks have high possibility for reluctance. Which is not a new thing for banks. Past trend reveals, everytime RBI cuts rate  - banks are slow in reducing interest rates and hence EMIs. On other hand, if a rate hike is made, they almost first to react by increasing lending rates.

Well a lot is yet to be seen and witnessed from banks. But for now, few of them have given thumbs up to RBI rate cut.

Zarin Daruwala, CEO, India, Standard Chartered Bank said, “with this rate cut, we should see a moderation in borrowing rates. Providing banks with increased flexibility on bulk deposits is a welcome move and will assist them in better managing their asset-liability mismatches.”