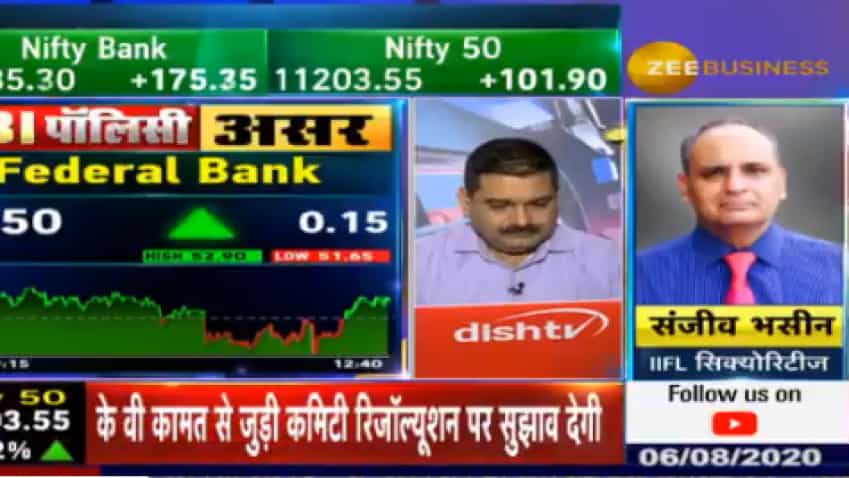 Welcoming the move, Sanjiv Bhasin said that Federal Bank will be an “inordinate” beneficiary of this. He said that it is a largest lender in this segment, calling the Federal Bank stock a “Blind Buy”
Written By: ZeeBiz WebTeam
Edited By: Harish Dugh
RELATED NEWS

Top Stocks to Buy: In a big move in its August Monetary Policy announcement today, the Reserve Bank of India (RBI) increased the gold loan-to-value ratio from the earlier 75 per cent to 90 per cent. The relaxation will be available till 31 March 2020. However, it created much confusion in the markets. Mapping the road ahead for market participants after the RBI announcement, was Zee Business Managing Editor Anil Singhvi. The Market Guru spoke to market analyst Sanjiv Bhasin and the IIFL Director had this to say.

On the impact of this move on the gold loan companies, Bhasin said that it is a win-win situation. The market expert said that there was no collateral risk in gold financing as there is only one collateral asset instead of ten types of assets.

For companies like Muthoot Finance, it is a runaway business now, he added. There is no risk for lender as the gold is now trading around USD 2000, he further said.

He further said that it is a myth created in some quarters that bank’s NRI Deposits would come down. The CASA ratio has been going up for the bank and its NPAs are also at a six year low, he added.

Bhasin has been bullish on Federal Bank and has been recommending the stock for channel viewers.

This was the 24th meeting of the MPC. The MPC has cumulatively cut the repo rate by 115 basis points over two meetings, resulting in total policy rate reduction of 250 basis points since February 2019, with an aim to boost economic growth.