RBI Monetary Policy: MPC cuts repo rate by 25 basis points, home and auto loans to be cheaper now - All you need to know 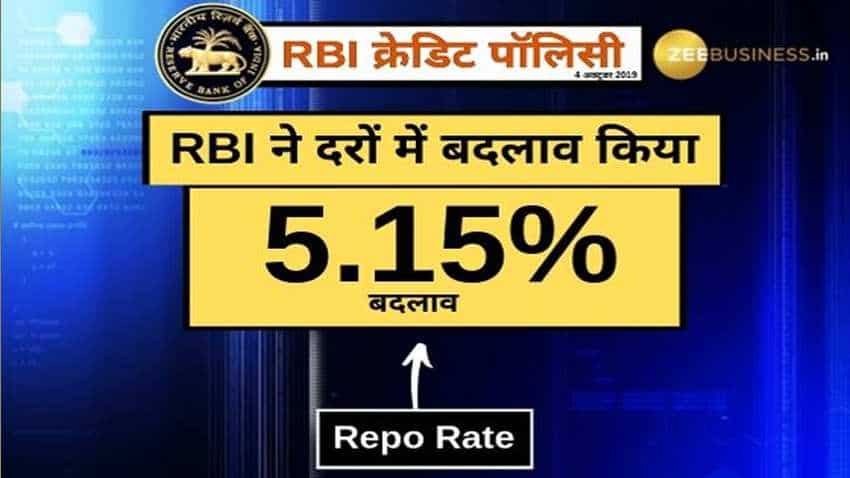 The Reserve Bank of India (RBI) on Friday announced the fourth bi-monthly monetary policy for 2019-20, after a three-day meeting.
Written By: Prashant Singh
Edited By: Harish Dugh
RELATED NEWS

The Reserve Bank of India (RBI) on Friday announced the fourth bi-monthly monetary policy for 2019-20, after a three-day meeting. The The six-member Monetary Policy Committee (MPC) cut the repo rate by 25 basis points. According to latest updates, RBI cut repo rate from 5.40% to 5.15%. Moreover, reverse repo rate adjusted to 4.90% and bank rate at 5.40 %, accordingly. And, with this big development, the prediction by Zee Business comes true!

RBI Governor Shaktikanata Das after the repo rate cut announcement highlighted the fact that the MPC was one in its desire to get the economy moving forward. He said, "All five MPC members supported the cut, they voted unanimously to slash the repo rate by 25 basis points". Governor Das added,  "There is a dearth in demand in rural and urban areas, but things have improved in agriculture sector."

Governor Das also said, "In August, there has been marked uncertainty global economy." Noteworthy, this is the fifth time in a row when RBI has slashed interest rates. Moreover, with cut in repo rates, home loans and auto loans are set to become cheaper.

Losers in the pack were Tata Motors, M&M, Bharti Airtel, HCL Tech, PowerGrid, L&T, and ICICI Bank, falling up to 1.18 per cent.

The rupee, meanwhile, strengthened by 5 paise against its previous close to trade at 70.82 in early session.

Elsewhere in Asia, bourses in Hong Kong, Korea and Japan were trading on a weak note, as investors await US jobs data scheduled to be released later in the day, after a series of weak figures this week, which triggered concerns over the global economy.

Chinese markets are closed for the holiday week.

However, US markets on Thursday ended higher on rate cut expectations.