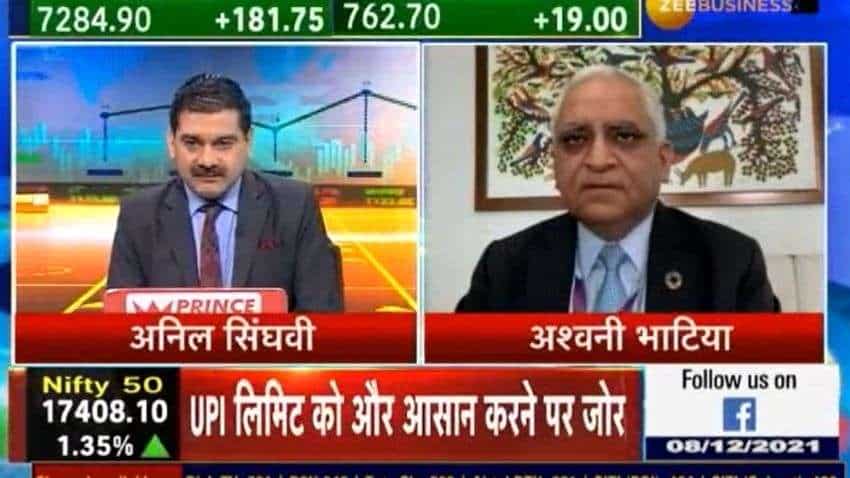 The Reserve Bank of India (RBI) made the announcements of the Monetary Policy Committee on Wednesday, December 8, 2021. RBI Governor Shaktikanta Das addressed the review of the MPC.

In the conversation with Singhvi, Bhatia said that the good thing that the RBI governor said was that they are going to give growth a chance. He further said that they will be patient and there are no surprises in the policy.

Bhatia also said that regarding inflation, the RBI governor has said that it is expected that there will be inflation of 5.3 per cent. "In my view, this is a good policy," Bhatia added.

The SBI MD also stated, "There are no surprises and it is positive for the markets. The RBI governor has also been a little patient due to the concern regarding the Omicron variant now."

However, Bhatia also informed that the RBI policy in February will come after the budget and in case any changes are to be brought then some actions might take place next time. He further said that today's policy has been on expected lines and positive. Furthermore, the RBI governor said that if any impact comes on growth due to Omicron, they will be patient with it.

Singhvi pointed out that there was a possibility of tightening the liquidity further, however, the RBI governor has announced no such thing. When Singhvi asked Bhatia if the policy can be positive for the banking system, he said, "RBI has slowly started normalisation on its part. The VRR announced for 14 days or 28 days suggest that the short-term rates have gone up a little. So, had the reverse repo rate been increased today, the markets would not have been impacted significantly."

"The liquidity remains the same, in place of overnight, it is going in 14 or 28 days," Bhatia added.

When asked about any striking features about the policy, Bhatia said, "Two things have been told - one discussion papers will come on investments, so going forward, we will have to see on that. Investments can be in the equity market or outside as well. The other thing is the capital that we infuse in our branches which are abroad. It has been told that if the capital ratios remain alright domestically then we can send capital abroad to support our branches."

Bhatia pointed out that one of the most important factors have been on digital payments, with the increasing number of UPI transactions, the RBI governor has also said about UPI and card transactions. He said that they will carefully go through the discussion papers that will come and will respond. He said that it is again a very good stop that will bring uniformity in the entire system.

It has to be noted that in today's policy, the Reserve Bank had kept the key interest rate unchanged in its after monetary policy review in August citing inflationary concerns. The repo rate and reverse repo rate unchanged at 4 per cent and 3.35 per cent, respectively. Also, it maintained its "accommodative" stance to ensure better economic recovery.

RBI increases threshold for deposits, other funds of non-financial small businesses by 50% to Rs 7.5 crore

CBSE term 1 exam results 2022 to be released soon: Class 10 and 12 candidates see where and how to check your scores