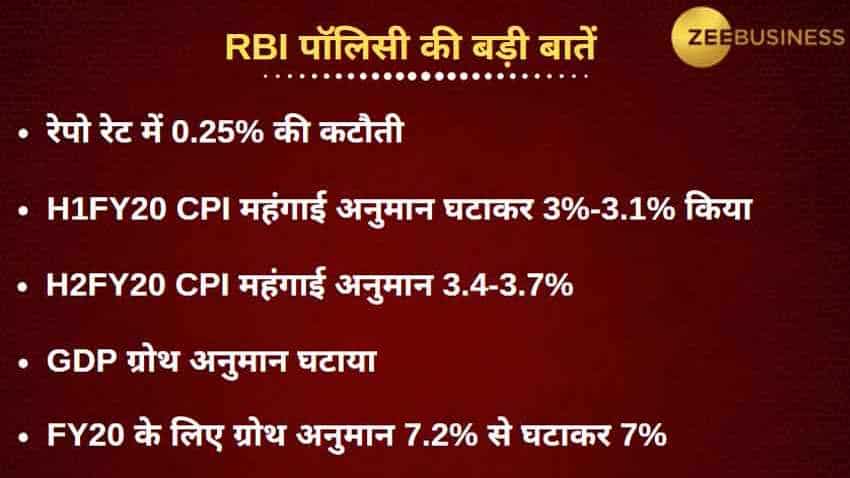 The Reserve Bank of India, in its second bi-monthly review report on Thursday, cut its policy interest rate by 25 basis points in a widely expected move.

RBI monetary policy 2019 Key Takeaways: The Reserve Bank of India, in its second bi-monthly review report on Thursday, cut its policy interest rate by 25 basis points in a widely expected move. Led by Shaktikanta Das, the six-member monetary policy committee (MPC) cut the repo rate to 5.75 percent.  The reverse repo rate was reduced to 5.50 percent. Along with this, the Central Bank also changed its monetary policy stance to "accommodative" after the economy grew at its slowest in over four years. All six of the MPC members voted for a 25 basis points cut, and for the policy stance to be changed to "accommodative" from "neutral".

Here are the key takeaways from RBI monetary policy 2019 -

1. Stance changed - The Reserve Bank of India has decided to change monetary policy stance from neutral to accommodative. In a statement posted on the bank’s website, the RBI said that the MPC had noted that growth impulses had weakened significantly as reflected in a further widening of the output gap compared to the April 2019 policy. "A sharp slowdown in investment activity along with a continuing moderation in private consumption growth is a matter of concern. The headline inflation trajectory remains below the target mandated to the MPC even after taking into account the expected transmission of the past two policy rate cuts," the release said.

2. Repo rate cut - As predicted by most experts, the RBI also decided to cut benchmark lending rate by 0.25 per cent to 5.75 per cent. "Against this backdrop, all members of the MPC (Dr Chetan Ghate, Dr Pami Dua, Dr Ravindra H Dholakia, Dr Michael Debabrata Patra, Dr Viral V Acharya and Shri Shaktikanta Das) unanimously decided to reduce the policy repo rate by 25 basis and change the stance of monetary policy from neutral to accommodative," the RBI said. This means that your home loan or auto loan could become cheaper.

3. Inflation projection raised - RBI has raised inflation projection to 3-3.1 pct for April-September quarter. "These decisions are in consonance with the objective of achieving the medium-term target for consumer price index (CPI) inflation of 4 per cent within a band of +/- 2 per cent, while supporting growth," the RBI said.

4. GDP forecast lowered - The Central Bank has decided to lower the GDP growth forecast for 2019-20 to 7 per cent from 7.2 per cent. It said that GDP growth for 2018-19 has been estimated at 6.8 per cent year-on-year (y-o-y), down by 20 basis points from the second advance estimates released on February 28, pulled down by a downward revision in private final consumption expenditure (PFCE) and moderation in exports.

"Quarterly data show that domestic economic activity decelerated sharply to 5.8 per cent in Q4:2018-19 from 6.6 per cent in Q3 and 8.1 per cent in Q4:2017-18. Gross fixed capital formation (GFCF) growth declined sharply to 3.6 per cent, after remaining in double digits in the previous five quarters. Private consumption growth also moderated. The drag on aggregate demand from net exports increased in Q4 due to a sharper deceleration in exports relative to imports," the RBI said.