Veteran industrialist Ratan Tata was conferred the title of "Global Visionary of Sustainable Business and Peace" by the Federation of Indo-Israel Chambers of Commerce (FIICC) for epitomising "unity, peace and sustainability" 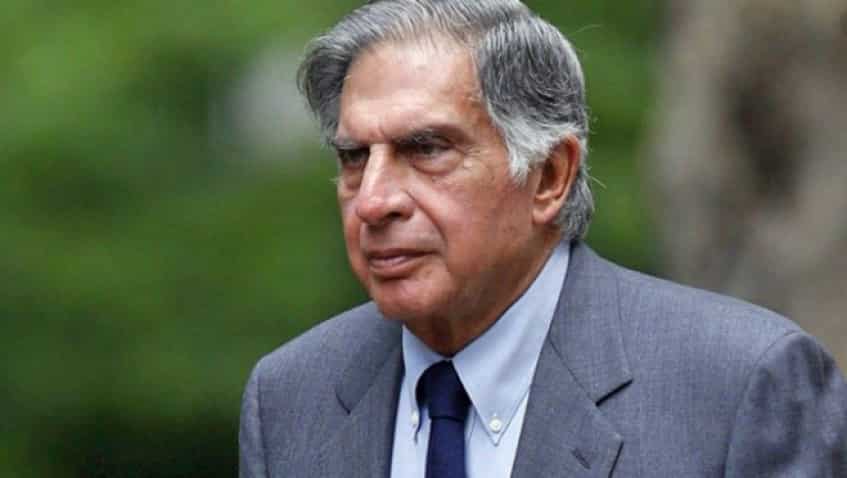 Veteran industrialist Ratan Tata was conferred the title of "Global Visionary of Sustainable Business and Peace" by the Federation of Indo-Israel Chambers of Commerce (FIICC) for epitomising "unity, peace and sustainability".

"Ratan Tata's support toward Israel has been unstinted. His commitment to put India on the global map with dignity and respect has been noted by each and everyone. A man respected by the business communities of all the three countries ? India, Israel and UAE - he epitomises unity, peace and sustainability," the president of the bilateral chamber, Dr Gul Kripalani, said.

"I am sure he is very happy to witness the Abraham Accords in his lifetime. (He is) rated as the most respected and ethical businessmen of India", Kripalani said in his speech bestowing the honour on the chairman emeritus of the Tata Group on Monday evening.
Tata said that he has always viewed Israel as a "country of great opportunity for India" and its creativity can be combined with India's low cost of manufacturing for exports to the entire world.

"It is a great privilege to be involved with a country like Israel that I have respect for. I have always called it a country of opportunity for India... There is something in the genes of Israeli people that makes them creative," he said at the virtual event.

The 82-year-old industrialist and philanthropist is the recipient of two of India's highest civilian awards -- Padma Vibhushan and Padma Bhushan.

The event was attended by participants from India, Israel and the UAE. It also saw the announcement of FIICC's global partnership with International Federation of Indo-Israel Chambers of Commerce (IFIICC), an independent organisation headquartered in Dubai that was recently launched as an international platform for collaboration between Israel and the Indian diaspora.
The initiative received Tata's endorsement who noted that "it is a great thing which should have happened many years ago".

"There is not much I can add to what has been said today. The union of coming together of the countries in the Middle East and Israel is a real step forward in a peaceful future and a future that has enormous potential. I think having this federation of associations between these countries is a great thing which should perhaps have happened many years ago," he said.

IFIICC was launched on December 14 and it witnessed the participation of senior officials and leading personalities from India, Israel and the UAE, including some leading Israeli politicians, such as President Reuven Rivlin.

"Creating and supporting business links between Israel, India and Gulf States, and with the Indian diaspora across the region, indeed around the world, is an undertaking of great importance", Rivlin wrote in a letter to IFIICC at its launch.

"Inshallah, b'ezrat Hashem, Bhagwan Kare, you will succeed in it. Business is a great connector between peoples. I encourage you to dream big dreams that make the most of what each of us has to offer and make our world a better, safer place. I wish you all the success for your discussions together, and that they may form the basis of new friendships and partnerships across the region," he said.

Participating from Dubai in the virtual ceremony, Merzi Sodawaterwala, the chairman of IFIICC, said, "Sustainable business is essentially the heart of the Tata Group."

"Every business decision for the Tata Group is always considering the impact on 3Ps ? people, planet and profit. Sir Ratan Tata is undoubtedly the most respected global visionary and sustainable business leader who has always stood for peaceful co-existence of people and planet much before the 2030 United Nations Sustainable Development Goals came into existence in 2015," he said.

"This was also visible most recently during the pandemic when the Tata Group stood by its people and communities at large, while the planet reclaimed its position displacing the ones focussing solely on profits. I don't think any award can do justice to Sir Ratan Tata's legacy and it is his sheer humility, which I respect the most, to honour the award by accepting it," he stressed.

Speaking to PTI, Sodawaterwala said that his newly instituted organisation is looking to set up offices globally, drawing the support of the Indian diaspora, the largest in the world. It will also be supporting all bilateral chambers of India and Israel, he said.

Raviv Byron, the founding president of IFIICC, told PTI, "Tata has done a lot for India-Israel ties. He has generously contributed towards promoting innovation that supports sustainability and has been a promoter of peace in the region, including with the Palestinians. He has visited Israel a few times which has been extremely beneficial in promoting ties between the two countries."