Rakesh Jhunjhunwala has seen drop in his portfolio, as one of his favourite stocks witnessed bearish demand from investors. 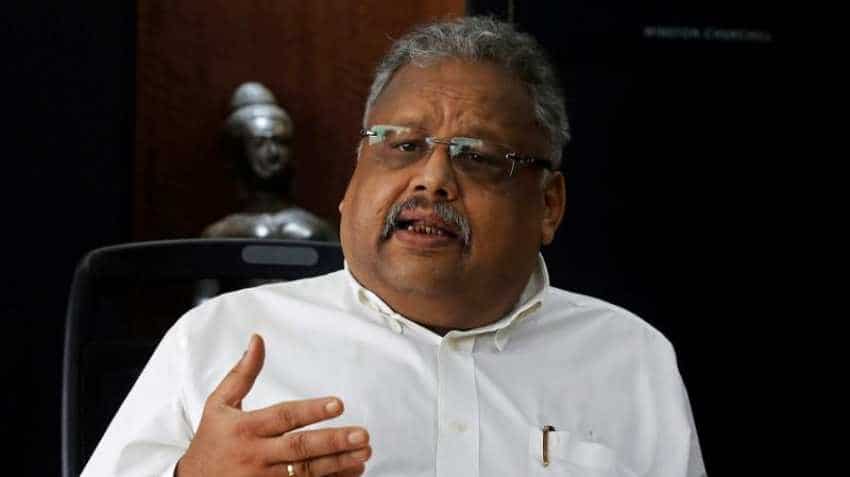 Over half of Rakesh Jhunjhunwala’s net worth comes from jewelry-maker Titan Company. Interestingly, Titan, which gave over Rs 8,000 crore worth returns by last month in Jhunjhunwala’s book, has now witnessed massive selling pressure. So much so, that even the ace investor’s wealth has been impacted. On Tuesday, Titan shares were trading at Rs 1,090.75 per piece, down by a whopping Rs 161.90 or 12.92% at around 1406 hours. Titan even touched an intraday low of Rs 1,072.60 per piece on the index. That would be an over 14.37% drop in just 1 day. Titan share price stood near Rs 1,252.65 per piece on Monday.

According to TrendLyne.com data, now the Dalal Street king’s wealth stands at just Rs 6,848.4 crore. He currently holds 62,451,220 shares or 7.04% stake in Titan. This jewelry stock has been the most favorite share of Jhunjhunwala, and honestly it has not failed to surprise the investor when it comes to making money.

In fact, just a few days before the Budget 2019 announcement, Titan even touched an all-time high of Rs 1,340.90 per piece on stock exchanges, making many investors rich including Jhunjhunwala. However, Titan fate and other jewelry and precious metal stocks suffered reverses after Finance Minister Nirmala Sitharaman announced gold custom duty hike to 12.5% from previous 10% in Budget 2019 on July 05. To everyone’s surprise, experts and companies were hoping for custom duty cut to 5%, but were perplexed with the hike and many investors have continued  to have profit booking sentiment in gold stocks.

But gold custom duty hike alone was not the reason for investors to have a selling bias on Titan, the company’s Q1FY20 quarterly update has also played a role in shattering faith. On Monday, Titan in a notification to exchanges said, “The quarter witnessed a tough macro-economic environment with consumption being hit. Very high gold prices particularly in June also impacted growth in the Jewellery industry. Against this background, the Company's growth particularly in the Jewellery segment was lower than planned even though the gains in market share were sustained.”

Talking about Titan’s Q1FY20 update, Priyank Chheda and Naveen Kulkarni Research Analyst at Reliance Securities said, “Titan reported its subdued Q1FY20E on the back of tough macro environment and weak consumption trend. We expect company to report total revenue growth of 15% yoy in Q1 FY20E (vs. our earlier expectations of 24% yoy in the quarter). Slowdown in revenue is mainly due to jewellery segment which reported muted revenue growth of 13% yoy. Higher gold prices resulted in muted demand FTM June’19. Watches segment reported better than expected revenue growth by 19% yoy mainly due to large institutional order. We lower our revenue growth estimates by 3.3% to 15.6% yoy in FY20E and 5.6% to 15.8% yoy in FY21E. EBITDA margins remains broadly unchanged. We cutn EPS estimates by 3.9% to 20.4 for FY20E and 6.3% to 24.4 for FY21E. Current economic slowdown is likely to impact the quarterly run-rates however Titan is likely to return the higher growth path once the consumer spending picks up in the economy.”

The duo added, “Titan remains one of the fastest growing company in the consumer space with multiple levers and sector tailwinds. Our thesis on market share gains remains intact in the jewellery segment which is likely to lead total revenue growth of 15.7% CAGR growth in earnings in next two years. EBITDA margins being capped at the current levels as company is undergoing expansion phase, where operating leverage gains are likely to be offset by higher investments across the brands. Net profits are expected to compound at 17% CAGR for next two years and is likely to compound at higher rate going ahead as investments done in brands mature, in our view.”

Hence, these analyst stated that, we continue to value Titan at 50x based on FY21E EPS and re-iterate HOLD rating. Our Target price is revised to 1,221 (earlier 1,304) incorporating the revised estimates.

Interestingly, the shareholding pattern for Q1FY20 of Titan will reveal a lot about what is Jhunjhunwala’s take on this stock. However, notably, Jhunjhunwala has removed couple of crores from Titan in last quarter, and on various occasions last year. However, when Jhunjhunwala was asked about his stake sale in Titan last year, he had stated that, he still believes in Titan and is extremely bullish but he cuts some stakes because for making alternate investment.

Titan definitely is a game-changer for Jhunjhunwala. He has invested in this company since December 2015, as per the data. In the beginning of December 2015, Titan was not even near Rs 400 per piece, and to many’s surprise the stock traded between Rs 500 to Rs 700 all the way till 2017. But from December 01, 2015 till July 01, 2019, Titan shares have risen by a breathtaking 255%, and hence one can imagine the gains this stock provided to Jhunjhunwala’s portfolio.