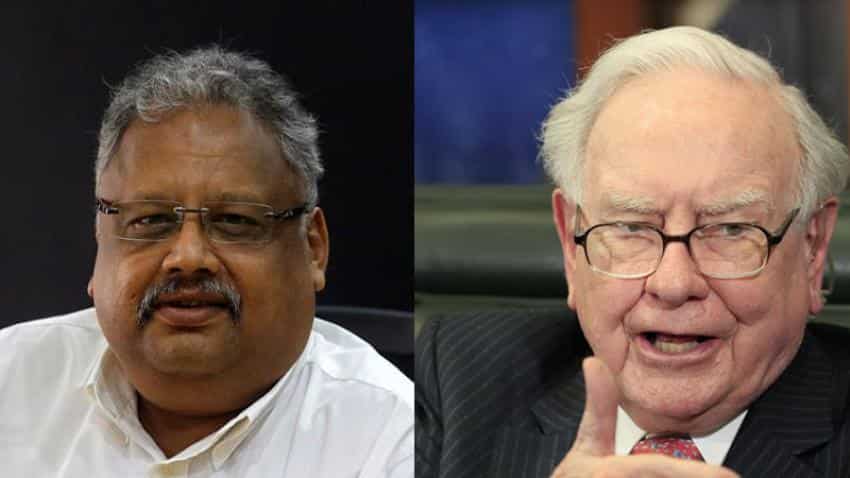 As is well-known, Buffett strongly advises against investing in debt-heavy companies. He doesn't favour market investment on leverage too. However, Rakesh Jhunjhunwala recently commented had it not been for leverage, he wouldn't have reached where he is now. He doesn't shy away from investing in debt-heavy companies too. On Thursday, Jhunjhunwala-owned RARE Enterprises bought 3 crore shares in debt-laden Jaiprakash Associates at Rs 18.37 per share amounting to nearly Rs 55 crore, as per bulk deal data available on the National Stock Exchange (NSE). Rakesh Jhunjhunwala had picked up some 2.5 crore shares, or 1 per cent stake, in the company in the June quarter of FY18 too. As of March 2017, the company's total debt stood at Rs 25,586.76 crore.

Prakash Industries is another debt-ridden company in Rakesh Jhunjhunwala's portfolio.

Warren Buffett, however, stays away from debt-heavy companies.

“Unquestionably, some people have become very rich through the use of borrowed money. However, that’s also been a way to get very poor. When leverage works, it magnifies your gains. Your spouse thinks you’re clever, and your neighbours get envious. But leverage is addictive. Once having profited from its wonders, very few people retreat to more conservative practices. And as we all learned in third grade – and some relearned in 2008 – any series of positive numbers, however impressive the numbers may be, evaporates when multiplied by a single zero. History tells us that leverage all too often produces zeroes, even when it is employed by very smart people," said Buffett in one of his annual letters to shareholders.

He believes leverage can be lethal to businesses as well.

"Companies with large debts often assume that these obligations can be refinanced as they mature. That assumption is usually valid. Occasionally though, either because of company-specific problems or a worldwide shortage of credit, maturities must actually be met by payment. For that, only cash will do the job. Borrowers then learn that credit is like oxygen. When either is abundant, its presence goes unnoticed. When either is missing, that’s all that is noticed Even a short absence of credit can bring a company to its knees. In September 2008, in fact, its overnight disappearance in many sectors of the economy came dangerously close to bringing our entire country to its knees,” Buffett cautioned.

Ind vs Aus Test: My skills with red ball are good and I am ready to bowl even 40-50 overs, says Washington Sundar