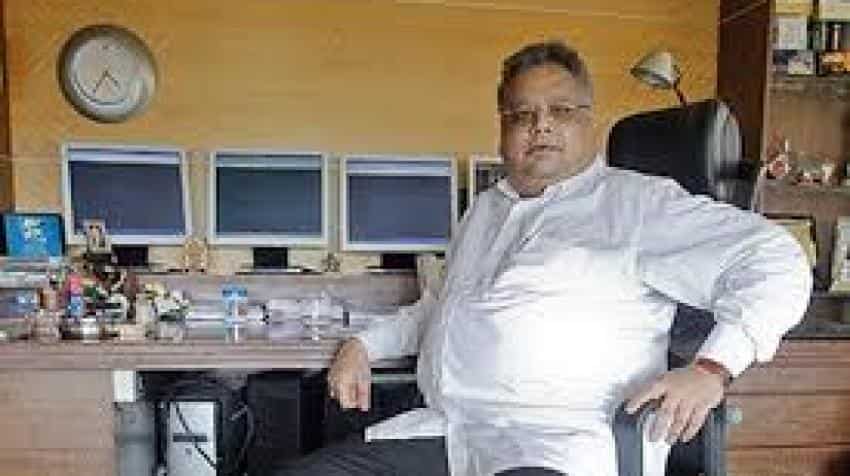 Rakesh Jhunjhunwala portfolio stock: It is a stock that the ace investor has kept himself attached to despite the woes the company is going through. Image source: Reuters
Written By: ZeeBiz WebTeam
RELATED NEWS

Rakesh Jhunjhunwala portfolio stock: It is a stock that the ace investor has kept himself attached to despite the woes the company is going through. Jaiprakash Associates on Monday released its shareholding pattern for the March quarter of financial year 2018. Interestingly, Jhunjhunwala's name appeared yet again among its public shareholders after a gap of two quarters. Jhunjhunwala had reduced his stake in JP Associates below 1 per cent in the September quarter, but again picked some in the March quarter to re-appear in company's shareholding pattern (SHP) details filed with BSE show. Notably, only those shareholders who own over 1 per cent stake in the company find a mention in the SHP document filed with BSE.

On Tuesday, Jaiprakash Associates share price settled at Rs 19.75, up 0.25 per cent from the previous close. The stock featured among best performing stocks in the March series following news reports that Rakesh Jhunjhunwala has picked more shares in the debt-ridden realty company. On a year-to-date basis, however, the stock is down 24.23 per cent against nearly 1 per cent gains on Sensex.

Meanwhile, adding to Jaiprakash Associates woes, the Supreme Court on Monday directed the realty firm to deposit Rs 100 crore with its registry by May 10. A Bench headed by Chief Justice of India Dipak Misra also directed the Insolvency Resolution Professional (IRP) to consider the representation of JP Associates on revival plans as per law.

On March 21, the apex court had asked Jaiprakash Associates to deposit Rs 200 crore in two instalments. The flagship company of the Jaypee group last week had deposited Rs 100 crore. So far it has deposited a total of Rs 650 crore in the registry of the Supreme Court. The bench headed by Chief Justice Deepak Misra had directed the company to deposit Rs 100 crore by April 16 and the rest by May 10.

To recall, hundreds of homebuyers were left in the lurch after the NCLT, on August 10 last year, admitted the IDBI Bank’s plea to initiate insolvency proceedings against the company for defaulting on a Rs 526-crore loan.