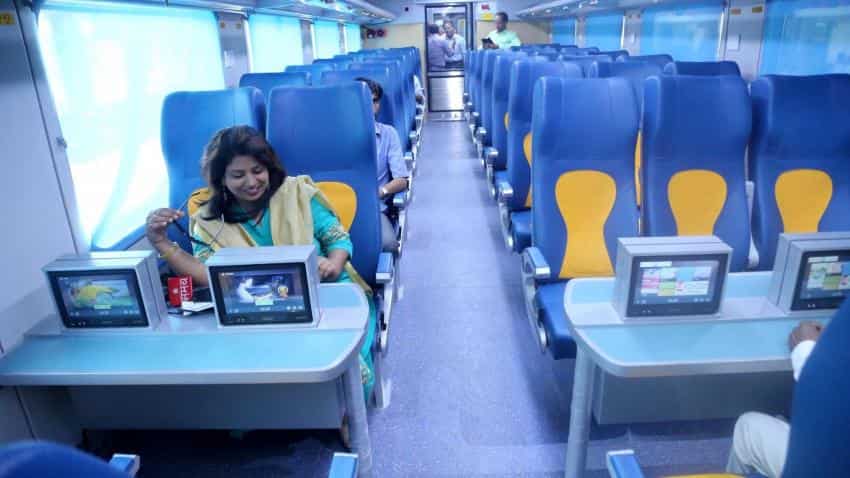 30 Delhi-bound trains delayed due to fog

Rajdhani, Duronto and Shatabdi Express travellers: Your menu is set to change; check what you may get

Travelling by Rajdhani Express? Here is good news for these cities

They are the premium trains in India. Rajdhani and Shatabdi Express were started to move people who could afford to pay more for a somewhat luxurious travel.

But after years of service, the trains have lost their sheen. The service has deteriorated, the cleanliness is missing, quality of food has suffered.

After years of complaints by the travelling public, the premium trains are now set for a makeover. The Railway Ministry is to launch "Operation Swarn" to improve services in Rajdhani and Shatabdi Express trains.

In the first phase, the Mumbai-Delhi Rajdhani Express and Mumbai-Ahmedabad Shatabdi Express have been selected for upgradation. Work will start from September 26. More trains will be identified in a phased manner.

A senior Railway Ministry official, who did not wish to be named, told IANS: "The railways have decided to launch Operation Swarn (or `gold`) to refurbish its services after several complaints by passengers like delay in train arrival, sanitation and quality of food."

The Ministry official also said the plan will be upgraded in future with services like Wi-Fi, infotainment screens (that were first provided in Tejas Express) and coffee vending machines.

The official said an amount of Rs 50 lakh will be allotted to each Rajdhani and Shatabdi train on various routes for the revamp. To monitor the work, two committees will be formed.

In May, Railway Minister Suresh Prabhu launched the first high-speed premium train Tejas Express between Mumbai and Karnali in Goa.

The train was designed to travel at 200 kmph but keeping in view the track conditions in the Konkan region, the speed was limited to 130 kmph.

Earlier this year, the railways launched a new series of fully air-conditioned express trains like Humsafar, Mahamana and Gatimaan for overnight travel.

The Mahamana Express has ergonomically designed ladders for climbing to upper berths, snack tables for side berths, windows with powered venetian blinds and roller blinds, LED lights as berth indicators, LED reading lights, fire extinguishers in all coaches and an electrically operated chimney in the pantry car.

30 Delhi-bound trains delayed due to fog

Rajdhani, Duronto and Shatabdi Express travellers: Your menu is set to change; check what you may get

Travelling by Rajdhani Express? Here is good news for these cities