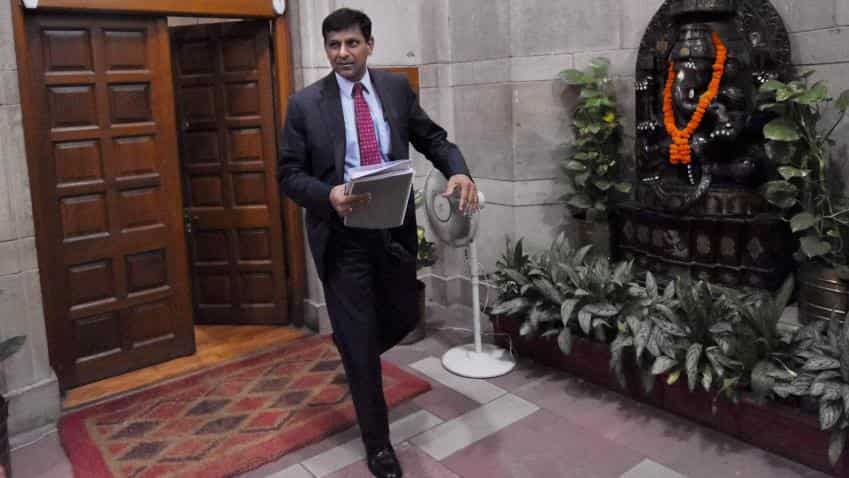 It said the consumer price inflation, which has shot up to 5.8 % in June, will cool down to 5.1 % by March. Photo: PTI
Written By: PTI
RELATED NEWS

Taking a contrary stand, foreign brokerage BofA-ML today said outgoing Governor Raghuram Rajan is likely to cut rates by 0.25 % in his final monetary policy review tomorrow on expectations of a cool down in inflation.

"We see three compelling reasons for the governor to cut rates by 0.25 % on Tuesday. As this is the last policy, he may stop at a dovish signal," the brokerage firm said in a note released on the eve of the policy review.

It said the consumer price inflation, which has shot up to 5.8 % in June, will cool down to 5.1 % by March, once food inflation ebbs on good rainfalls. The brokerage, however, said the same number will inch up to 6 % in July.

Apart from inflation, it said, the high lending rates in the system are affecting the economic recovery by impacting loan demand. The note added the high rates are also leading to higher non-performing assets.

With the 'busy credit season' which witnesses a spurt in loan demand going up, it would be good to lower the rates ahead of it.

A possible rate hike by the US Fed, which was earlier said to be one of the factors deferring a cut by the RBI, is also getting delayed, it said.

With the RBI pushing for reforms, the brokerage pointed out the passage of the constitutional amendment on GST which should assuage concerns.

Rajan is widely expected to go in for a status quo at his last review on inflation concerns. This is going to be the last bi-monthly monetary policy to be decided by the central bank governor as the broad-based six-member panel may take over the job before the next review on October 4.

The government announced last week that it would like the RBI to focus on maintaining retail inflation rate of 4 % for the next five years, based on which the new interest rate setting panel would take its monetary policy decisions going forward.

The move, which provides for a margin of plus or minus 2 % in this target thus fixing the upper tolerance level at 6 % till 2021, is being seen as the government putting the seal on Rajan's inflation-first model of monetary policy.