In Mumbai, at least 15 locations received in excess of 20 cm and 30 cm of rainfall within 24 hours on September 4, as recorded by the BMC`s rain gauges in different areas. 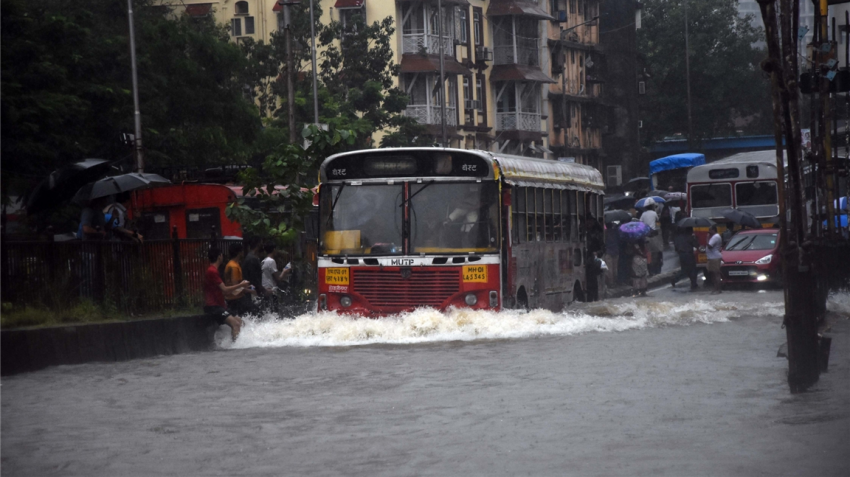 The IMD today forecast heavy rains for Mumbai, Thane, Palghar and Raigad districts, and advised people to keep away from the stormy Arabian Sea, beaches and creeks. Image source: IANS

Monsoon has once again wreaked havoc on the country`s commercial capital, paralysing day-today-life and claiming at least five lives in different incidents, as record rains have been witnessed in Mumbai and its suburbs on Wednesday, said an IANS report, citing officials. Releasing the rainfall data of September 4, the BrihanMumbai Municipal Corporation (BMC) Disaster Control reportedly said the city has recorded 127.9 mm (season`s total - 2,263.2 mm), the eastern suburbs got 173.4 mm (3,006.3 mm) and the western suburbs notched 186.0 mm (2,765.1 mm). The average for the city and suburbs stood at 102.73 mm and 114.79 mm, respectively, with the season`s total averaging to 2,358 mm, or nearly 114 per cent of the annual rainfall.

Meanwhile, two labourers, Vijayendra S Bagdi, 36, and Jagdish Parmar, 54, fainted and collapsed in Goregaon on Wednesday evening, said the report, adding that they were rushed to nearby hospitals but were later declared dead. In another incident, a 24-year old youth, Sharukh S Shaikh, drowned in the Mahim Creek near Kurla and his body was fished out by the Mumbai Fire Brigade later in the evening.

In one more incident, a boy, who had jumped into the swollen Mithi River for a swim along with three friends, is still missing. Indian Navy has launched a search operation for him since Thursday morning. The authorities recovered the floating body of a 60-year old man, Ashok D. Mayekar, near the heavily flooded Hindmata area in south-central Mumbai.

Rescue agencies have reportedly shifted around 1,400 people to safe places in Kurla`s Krantinagar and Bail Bazar areas where water seeped into their homes in the wake of heavy rains which flooded the Mithi River. At various locations in the city, including railway stations, as many as 2,300 people were stranded, but they were put in temporary shelters in different parts of the city.

The IMD today forecast heavy rains for Mumbai, Thane, Palghar and Raigad districts, and advised people to keep away from the stormy Arabian Sea, beaches and creeks.

Maharashtra's Education Minister Ashish Shelar has, however, declared a second day of precautionary holiday for all schools and junior colleges in these districts after Wednesday`s holiday.