Railway  station and the adjoining area in each of these cities will be redeveloped on the lines of Area Based Development provided in the Smart City Mission Guidelines. 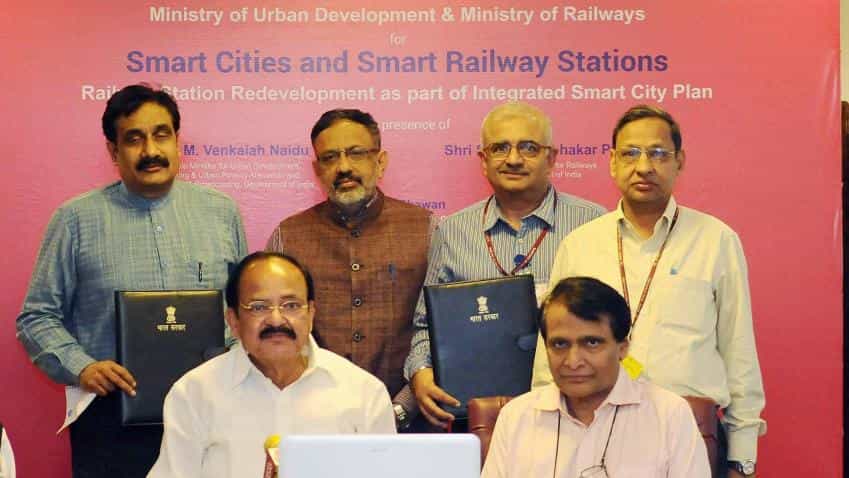 The Ministry of Urban Development and the Railways Ministry on Wednesday signed a memorandum of understanding (MoU) for redeveloping railway stations and adjoining areas under the Smart City scheme. This will enhance passenger amenities, easy access to stations, enabling optimal utilisation of land at railway stations, as a part of Smart City development.

Railway station and the adjoining area in each of these cities will be redeveloped on the lines of Area Based Development provided in the Smart City Mission Guidelines. Average cost of redevelopment of identified area of about 500 acres in the Smart City Plans of 60 cities approved so far comes to about Rs 1,500 crore.

Naidu said on the occasion that this convergence based city development will result in qualitative improvement in city life. He suggested involvement of local people in redevelopment plans.

Naidu suggested that to begin with 10 cities could be taken up for the proposed redevelopment with the involvement of National Buildings Construction Corporation(NBCC) which has successfully executed redevelopment projects on self-financing basis. These cities include Sarai Rohilla (Delhi), Bhubaneswwar, Lucknow, Varnasi, Jaipur, Kota, Thane, Margao(Goa), Tirupati and Puducherry. This was agreed to by Railway Minister.

Prabhu said that railway stations have been the core of city development and have become congested over time and their redevelopment offers immense opportunities for changing city landscape. Stating that redevelopment work of Habibganj railway station has already been awarded and plans for Anand Vihar (Delhi), Surat, Bijwasan and Gandhinagar are in advanced stage.

He said that several countries like Germany, France, Japan, South Korea, UK and Belgium have showed interest in redevelopment and a Round Table of domestic and overseas bankers will be organised next week to discuss financing of these redevelopment projects.

The MoU proposes two Joint Venture options for speedy redevelopment of railway station centred areas. The first being between the Railways and the Special Purpose Vehicle (SPV) formed for execution of Smart City Plans, with equal share in equity. In the second model, National Buildings Construction Corporation (NBCC) can be roped in with equal share among the three. NBCC can design, develop and execute the redevelopment plans on self-financing basis.

The validity of the MoU is five years to begin with and can be extended with the consent of both the Ministries.