Rahul Gandhi takes over as Congress President from today 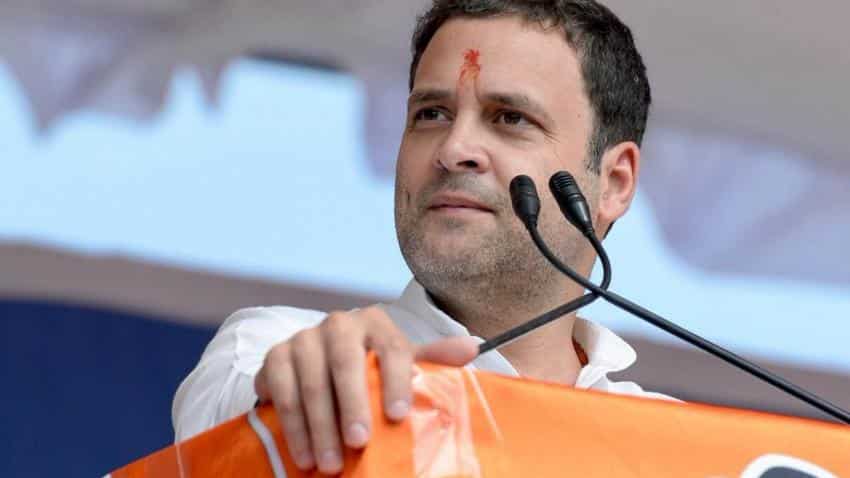 Gandhi takes over the reigns of the party from his mother Sonia Gandhi, who has helmed the party for 19 long years. Image Source: IANS
Written By: IANS
RELATED NEWS

Rahul Gandhi takes charge as Congress president with party's central poll authority handing him over certificate of election to the top post.

Scores of Rahul Gandhi supporters broke into loud celebrations, shook their legs to upbeat music, raised slogans, burst crackers and distributed sweets outside the Congress office here on Saturday ahead of his taking over as the new President of the Grand Old Party.

Gandhi takes over the reigns of the party from his mother Sonia Gandhi, who has helmed the party for 19 long years.

Outside the 24, Akbar Road, Congress Headquarters, a group of colourfully dressed artists played drums and danced to Punjabi bhangra tunes with party supporters, including men and women, shaking a leg or two and waving Rahul Gandhi`s pictures and Congress flags.

There were other groups of artists from Hyderabad and Rajasthan performing folk dances of their regions.

Former Prime Minister Manmohan Singh, Sonia Gandhi, current and former Chief Ministers, MPs, senior Congress leaders, and all PCC chiefs and delegates were expected to be present at the handing over ceremony.

Congress spokesperson Randeep Singh Surjewala said the Congress was making a new resolve for the country. "Today we are taking a pledge for a new movement in India.

"Free from fear, for freedom of expression, for eliminating discriminations, for promoting brotherhood and saving democracy."

The entire process would be completed after the Central Election Authority President Mullapally Ramachandran hands over the Certificate of Election to the newly-elected Congress president.

Sonia Gandhi on Friday announced that it was time for her to retire, triggering immediate speculation about her future plans.

The Congress sought to quell it saying she has only retired from the party chief`s role and not from politics.

She also added that Rahul Gandhi has been playing an active role in the last three years.

The 47-year-old Gandhi scion`s formal takeover comes two days before the counting of votes for Gujarat and Himachal Pradesh elections, the outcome of which could be a trendsetter for the 2019 Lok Sabha election.

Rahul Gandhi had been the party Vice President for over four years since 2013.

His main challenge remains the revamping of party organisation, apart from electoral battles in the run-up to the 2019 Lok Sabha polls.