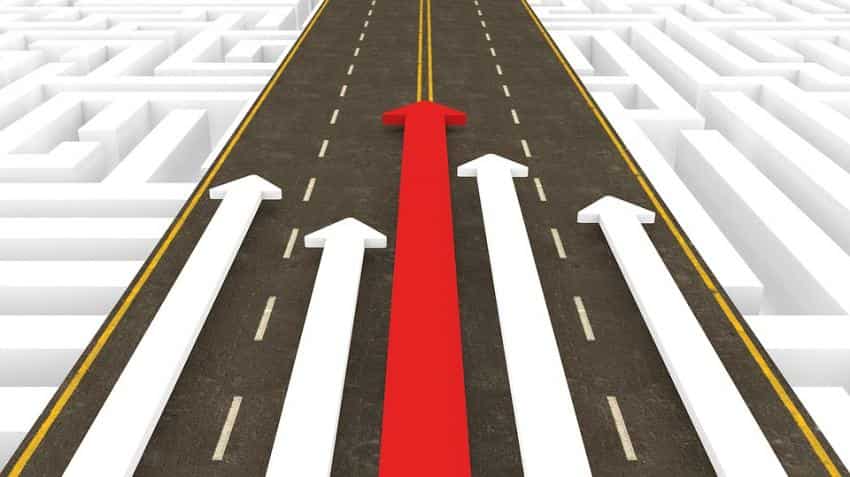 India Inc has been performing on single-digit growth since the past few quarters, and looks like the second quarter of fiscal year 2017-18 (Q2FY18) will be no different.

This growth is on the back of higher commodity prices and a pickup in most consumption linked sectors. However, it remains range-bound at 6-8% for the seventh straight quarter since the breakout in Q4 FY16 from 0-2% in the preceding four quarters. 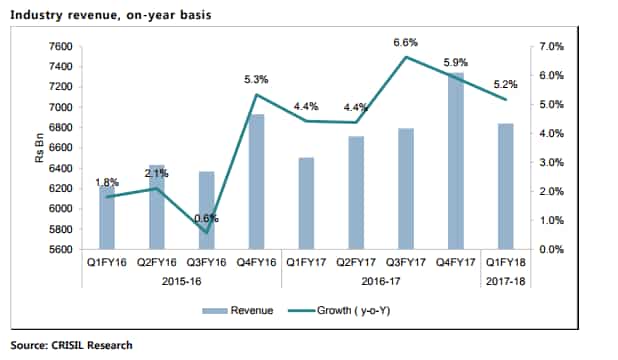 Export-based sectors such IT services and pharma were impacted amid pricing pressure in global markets and a stronger rupee as compared to last year. While consumption-linked sectors like telecom services suffered because larger incumbents saw an erosion in their pricing power due to rising competitive intensity.

Apart from this, sectors like FMCG and automobile also grew at slower pace because of destocking ahead of the Goods and Services Tax (GST) rollout.

Only revenue of commodity-linked sectors expanded by a robust 27% as the realisations on key commodities such as steel, crude oil and aluminium rose 24%, 12% and 6.9%, respectively

Analysis of Crisil is corroborated from the performance of 422 companies across 50 sectors (excluding financial services and oil).

India Inc will start announcing its financial audit for September 30, 2017 quarter from next week, here's how the below mentioned sectors will perform in the quarter as per Crisil.

Growth in this sector should improve on lower taxes (for a short period after GST kicked in), restocking and supply constraints easing in the commercial vehicle space after the implementation of BS IV norms.

Average realisation is also seen improving because of faster sales in commercial vehicles (volume growth over 20%). This will also support revenue growth.

Gross revenue of telecom is expected to decline 15% due to competitive pressures. In an effort to retain high data-using subscribers, incumbents are devising plans that are expected to increase pressure on data tariffs and realisations, including voice.

Data volume growth will continue to be offset by sharp tariff drops.

Top-line growth of this sector is seen declining by  7-9% following double-digit pricing erosion in the base business – or drugs that are not in the exclusivity period – will partially offset gains accruing from new product launches and two Para IV launches during the quarter.

A strong Abbreviated New Drug Application pipeline and approvals from the US Food and Drug Administration to some major plants, which would prop exports, would prevent a further fall in revenue.

Domestic revenue is expected to rise on restocking after GST.

Revenue growth of power would be aided by a rise in demand. PLFs should also rise on higher generation from coal-based plants. Further, a sharp rise in the exchange-traded prices of power in September would support revenue.

INR revenue is expected to continue grow in single digit amid a 4% currency appreciation on year and continuing billing pressure. Tier II companies would grow at a faster rate than Tier I counterparts.

For this sector, revenue will be muted. Transition after GST as well as re-stocking are expected to take some time. However, demand is expected to normalise by September 2017. Hence, a marginal growth in revenue.

Revenue is forecasted to rise by 30-35% -  with revival in domestic demand along with a surge in exports aiding healthy volume growth.

Sales volume is projected to grow 10%, in line with the rise between July-August 2017 when domestic demand rose 7% and exports 48%.

This sector should see revenues growing between 13-15% on strong growth in passenger traffic, primarily domestic, which is seen up 13-15% despite a rise in fares.

Under international segment, passenger traffic for the 3 listed carriers is expected to be up 13-14% mainly due to a decline in fares. Moreover, with bilateral seat restrictions limiting expansion of foreign carriers, domestic airlines are gaining market share abroad.

Volume growth in cement to remain subdued amid prolonged rains. Overall revenue growth would be close to 5% on the back of improving realisations.

Revenues in petchem are expected to grow sharply with a rise in the price of feedstock naphtha, tangoing higher crude oil prices. Ramp-up in production at Reliance Industries’ PX plant at Jamnagar would drive sequential volume growth.

Prasad Koparkar, Senior Director, CRISIL Research, “Had it not been for telecom, India Inc. would have grown over 8% this quarter on the back of a 10-12% growth in select consumption driven sectors such as auto, airlines, retail, media."

Finally, Hetal Gandhi, Director, CRISIL Research, said, “EBIDTA margins could fall for 12 of the 21 key sectors. However, better revenue growth will ease pressures from the previous quarter when 16 key sectors had seen a dip in margins. Telecom services, pharma and IT services will see the sharpest fall in margins. In fact, had it not been for these sectors, the EBIDTA margins of key sectors of India Inc would have seen only a 50 bps drop.”

India''s gold demand to rebound in 2021 as economy expands - WGC