Rajnish Kumar, Chairman, SBI, feels that the profit in the current quarter of July-September would be contingent on the NCLT approving a resolution of one large account. In an exclusive interview with Zee Business, Kumar said the bank is planning to sell 4 per cent stake in its general insurance subsidiary, SBI General Insurance this financial year. 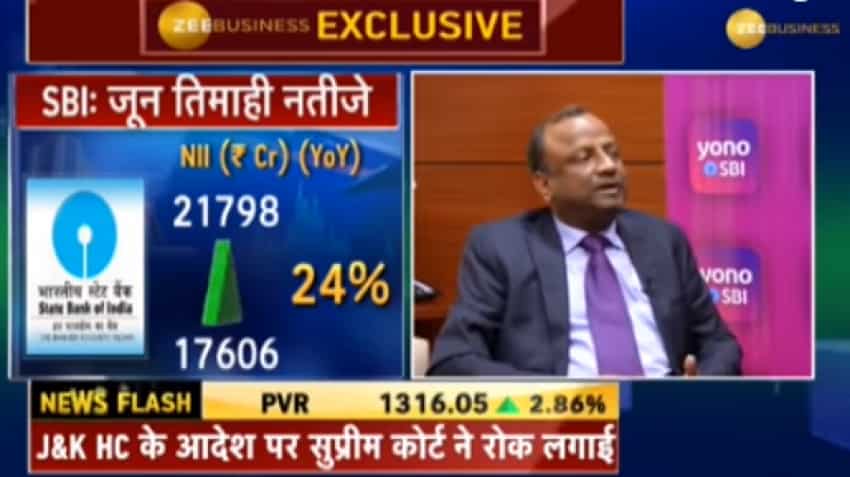 Country’s largest lender, State Bank of India (SBI) on Friday reported a surprise loss for the third straight quarter. The bank incurred a net loss of Rs 4,876 crore during the quarter ended in June 2018. However, Rajnish Kumar, Chairman, SBI, feels that the profit in the current quarter of July-September would be contingent on the NCLT approving a resolution of one large account. In an exclusive interview with Zee Business, Kumar said the bank is planning to sell 4 per cent stake in its general insurance subsidiary, SBI General Insurance this financial year. Here are the edited excerpts:

Q: The bank has posted negative quarterly results for the third consecutive time. What can be the reason for it? Secondly, the bank's provisioning is to elevate and what can be the reason for such an elevation?
A: The bank's profit being hit by a large depreciation of the value of government bonds in June quarter was one of the many reasons behind it. On June 30, 2018, the bank went for Rs 5,900 crore mark-to-market provisioning of the same. However, RBI gave us a dispensation of four quarters for the same, but we, the board and the management, wanted to end it in this quarter to make sure that the hangover of Rs 1,500 crore doesn't remain in existence for remaining quarters.

A: Bank's control of the cost of fund is one reason for the improvement in its net interest market and we are also trying to increase yield on advances. This account has resulted in a 12 per cent increase. Similarly, a 24 per cent increase can be attributed to the two accounts of National Company Law Tribunal (NCLT), whose interest income right backs were given to the bank. Currently, the bank's net interest margin at domestic level stands at 2.95 per cent, but the removal of the impact of these two accounts reduces it to 2.8 per cent in June.

Q: Let's talk about NPA's. Can you let us know about such sectors where the pain is visible? Is the recovery in infrastructure sector visible?
A: Recoveries are visible. The main thing is related to the provisioning of the losses due to loans and State Bank of India is at a place, where provisioning is about complete. When it comes to assets of the power sector then we know that any attempt to sell them will help us in crystallising the losses. We are trying to go for resolution of 6-7 power assets and their resolution will definitely have an impact on our September quarter results. The best part of there resolution is that it will help us to give an end to the power sector stress on the bank. Resolving such assets will help us in strengthening our position in terms of NPAs and provisions.

Q: Will SBI take a position in the rights issue of IL&FS's? If yes, then what will be the reason for such a decision? Because IL&FS is a weak company and bailing out it raises questions.
A: No, we have not made any decision on it and we have not received any written request for it. The bank will take decision on it after receiving any such request. The decision will be made after considering the investment policy of the bank and understanding the prevalent circumstances.

Q: Now let's talk about value unlocking. Let us know about the companies where value unlocking has been planned? Also, let us know about its possible timeline?
A: Next year, we will be unlocking the values of three companies namely, SBI General, SBI Mutual Fund and SBI cards. In fact, we have started with the process for SBI General. We look to sell a 4 per cent stake in the general insurance arm and this trial will help us to determine its value and act as a precursor for the IPO. Process for the remaining two companies will be started soon.