Prime Minister Narendra Modi touched upon various issues including the laurels brought by the Indian Olympic contingent, country's fight against the Coronavirus pandemic and how India was working to transfer the lives of the citizens with its principle of Sabka Saath, Sabka Vikas Sabka Vishwas 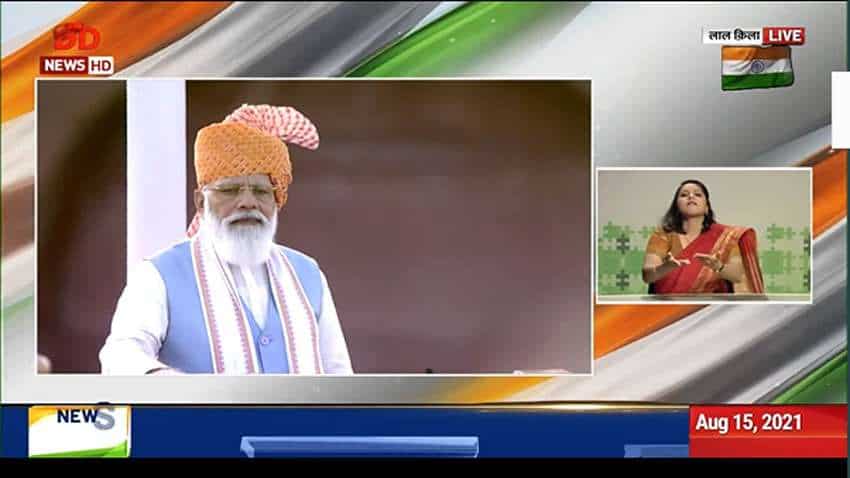 India is celebrating its 75th year of Independence and Prime Minister Narendra Modi has greeted the citizens on the occasion. Modi has congratulated the people of the country wishing that this year of Amrit Mahotsav may infuse new energy in the people of the country. The Prime Minister’s message has come via his official Twitter handle @narendramodi.

-- PM Modi - With the tricolour being the witness, I announce a National Hydrogen Mission. It is one of the biggest goals of the country which will give a quantum leap to the country.

-- PM Modi - The 21st Century India is capable of setting big goals and also achieving them. Today, the country is solving even those issues which have been awaited for decades - Whether it is changing Article 370 or freeing India from the web of taxes by intoducing GST (Goods and Services Tax) or whether it is One Rank One Pension (OROP) or the peaceful resoltion of the Ram Janam Bhumi case... all this has been done over the last few years.

-- PM Modi - Today, the world is looking at India with a new perspective and there are two aspects to thsi - terrorism and expansionism. India is fighting with these challenges with full strength.

-- PM Modi - It is a matter of pride that the daughers of the country are excelling in all the fields be it sports, boards examination or olympics. Today, the daughters are eager to make their own space.

-- PM Modi - We must work together for building Next Generation Infrastructure

-- PM Modi - We must work together for building World Class Manufacturing

-- PM Modi - We must work together for building Cutting Edge Innovation

-- PM Modi - We must work together for building New Age Technology

-- PM Modi - India's dream is that the small farmers become the pride of the country. In the years to come, it is necessary to direct the small farmers into communities to strengthen them. It is important to give them new facilities.

-- PM Modi - We are transforming are villages at a fast pace. Over the past few years, we have worked to build roads and and taking electricity to every home in the villages. Now the villages have a network of optical fibre and the power of data is reaching there... internet is reaching there. Villages are now producing Digital Entrepreneurs.

-- PM Modi - My 8 cr sisters of the Self Help Groups (SHG) in the vallages are making exemplary products. In order to provide their products bigger platforms in India and overseas, the government is working to develop ecommerce platforms.

-- PM Modi - Ladakh is now marching towards immense potential of development. On the one hand it is seeing modern infrastructure development, while on the other hand the Sindhu Central University will become a centre for higher education.

-- PM Modi - Every individual gets opportunity accourding to his ability, that is the true spirit of democracy. Whether it is Jammu or Kashmir, the balance of development is now visible on ground. In Jammu & Kashmir, a delimitation commission has been set-up and preparartions are being made for holing elections in future.

-- PM Modi - A new history is being written on the connectivity of North East. This connectivity is not only of infrastructure but also of hearts. Very soon, all capitals of the North Eastern states will be connected with the Railway network. Our eastern India, north east, Jammu Kashmir along with Ladakh and the entire Himalayan region, the coastal belt or the tribal areas - all these will play a big role in the development of the country in future.

-- PM Modi - The Government is working with the principle of Sabka Sath Sabka Vikas Sabka Vishwas.

-- PM MOdi - The Coronavirus Pandemic came as a big challenge for the country which was moving progressing. The entire country has fought this battle with a lot of patience.

-- PM Modi - We celebrate the Independence Day but the pain of partition still prevails in our hearts. This is one of the biggets tragedies of last century. The country took an emotional decision yesterday. 14 August will now be observed as  Partition Horrors Remembrance Day in India.

--  PM Modi - On this occasion of the Amrit Mahotsav when India is observing its 75th year of independence, I extend my best wishes to you all and to everybody who loves the country across the world.

-- The PM lauded the eforts of the sports persons who brought laurels for the country at the recently concluded Tokyo 2020 olympics.

--  PM Modi - I would like to begin by conveying greetings on this special occasion of Independence Day. This is a day to remember our great freedom fighters.

-- PM inspecting the Guard of Honour.

The PM visited Raj Ghat to pay homage to Mahatma Gandghi around 7:10 am. He will now be heading towards the Red Fort for flag hoisting followed by his address to the nation.

Greetings to you all on Independence Day.

The PM Modi will also be addressing the Nation on this occasion from the ramparts of Red Fort. The address will be broadcast live by national public broadcaster Doordarshan, while the Press Information Bureau (PIB) will also live-stream the speech on its YouTube channel, as well as on its Twitter handle.

The official YouTube channel of the Prime Minister’s Office (PMO) will also air the national address. Also, the PMO’s Twitter handle will provide live updates of the speech.

India’s Olympic contingent, which registered its best ever Olympics performance in the recently concluded Games in Tokyo, has been invited by the Prime Minister Modi for the Independence Day ceremony at the Red Fort. Indian athletes won a record seven medals at the Tokyo Games, including a gold, two silver medals and four bronze medals. Shuttler PV Sindhu, Mirabai Chanu and Bajang Punia were among the olympians present during the event. The Indian Contingent comrised of 240 Olympians.