In an interview with Ramesh Ramachandran of WION, President Bashar al-Assad shared his views on topics of political and economic importance. President Assad said that India is welcome to play an economic role in the reconstruction of Syria. 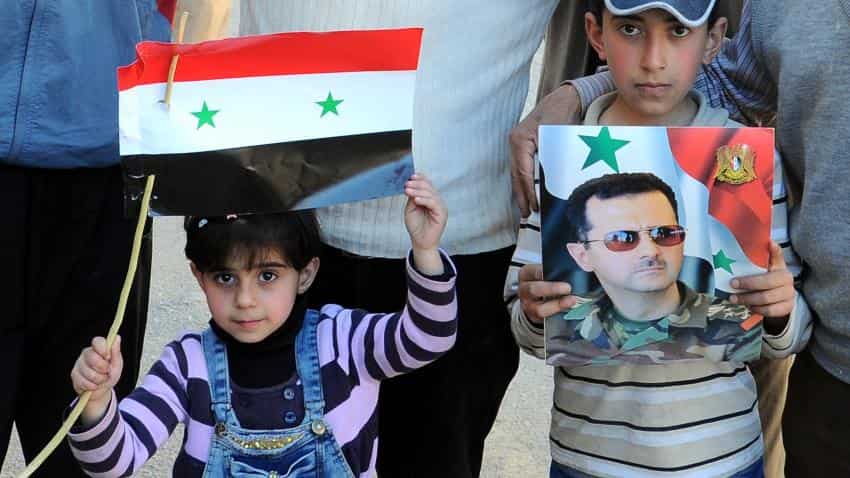 Syrians hold a Syrian flag and a portrait of President Bashar al-Assad in the town of Zabadani, western countryside of Damascus, capital of Syria. Image Source: IANS
Written By: ZeeBiz WebTeam
RELATED NEWS

Will sign trade deal with India if it is right: Donald Trump

Syrian President Bashar Al-Assad, in an interview with Ramesh Ramachandran of WION said that he would welcome India to play an economic role in the reconstruction of the country.

With the mass terrorists bombings in the country, Assad invited India to rebuild Syria post the war. The President confirmed that the war situation in the country has gotten better as they have gained more control of their land.

“If you want to talk about the reconstruction, as you know when you have war in any country that destroys much of the infrastructure, the most profitable sector would be the rebuilding, and India is welcome to play an economic role in the reconstruction of Syria, something that we already started,” President Assad said.

This he added was a project that already began in Damascus.

“We started this project in Damascus, and now we are expanding that project in most of the cities in Syria, of course after the liberation from ISIS and al-Nusra and those terrorist groups. Of course, we welcome any Indian company,” he added.

On asked if the President would visit India on his seldom travel abroad, Assad agreed and spoke of Indo-Syrian relations.

“The scope of the relation between Syria and India, I would describe it as ample scope, and that was my plan in 2008, and this relation was moving upward. Because of the war, things have changed in a different way, but of course after this war India will be one of the first countries to visit, not because of the scope of the relation, but actually because we have to be faithful or loyal to every country that was objective and moral in its position toward the war in Syria,” President Assad said.

In a concluding remark the President ended with India should be a leader and minaret its political and social ideals.

“I think India, the Indian people are the one that could be that minaret because of the diversity that you have, because of the civilization that's deeply rooted in the history, and because of the morals that you base your society and your politics on, because of the real democracy that India showed to the world, because of many things, I think India is the one who is ready to lead that direction if they want to set an example for any other country to follow. This is my most important message because we know what's the meaning of diversity because we are a diverse country but on a smaller scale,” the President said.

The full interview with President Assad will be aired on Tuesday, June 6, 2017 at 8 PM only on WION.

Will sign trade deal with India if it is right: Donald Trump