Everything about Dutt`s home-produced "Prassthanam" has been done keeping that sole objective in mind. The idea works as far as casting is concerned at least -- Manisha Koirala and Jackie Shroff, particularly, hark back to Dutt`s glory days. 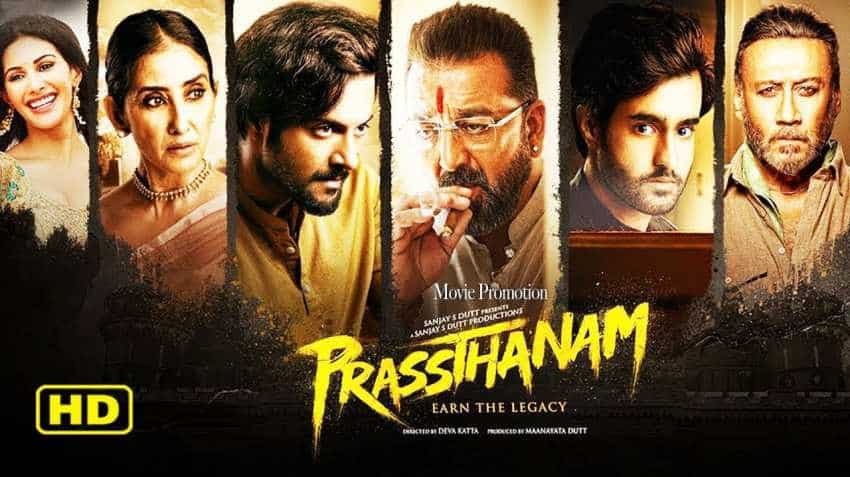 Like everything in commercial cinema that has a Telugu hangover, director Deva Katta`s film is played out with over-the-top flourish. Image source: Youtube

Something seems dated right away, and it has nothing to do with nineties sensations Sanjay Dutt and Manisha Koirala being the top-billed stars of the film. You realise why, soon enough. It is the content and execution that trigger off a throwback, though not necessarily in an intended way. The film is a remake of the Telugu potboiler "Prasthanam" by the same director, which released nearly a decade ago. Much has changed by way of mainstream cinematic taste, "Prassthanam" doesn`t necessarily take that fact into account.

Like everything in commercial cinema that has a Telugu hangover, director Deva Katta`s film is played out with over-the-top flourish. Even by mainstream standards, this mix of heavy melodrama and violence, supplemented by heavier dialoguebaazi, seems jaded now. "Prassthanam" is billed as a drama centred on a political family. It ends up with utter predictability at its core, with very little novelty content-wise.

Why would such a film be made? Because Sanjay Dutt needed a solid showcase for himself more than cater pathbreaking entertainment, to prove that he still matters. Cliched as "Prassthanam" is, it sets up a central protagonist that lets Dutt play to the gallery with trademark swagger and screen presence. At 60, it was perhaps important for the mercurial superstar to underline that he still counts. His last role was a forgettable one in the deplorable "Kalank", after all ? which in turn had followed "Saheb, Biwi Aur Gangster 3" and "Bhoomi" in recent times. It has been a while that Sanjay Dutt gave his fans a memorable show.

Everything about Dutt`s home-produced "Prassthanam" has been done keeping that sole objective in mind. The idea works as far as casting is concerned at least -- Manisha Koirala and Jackie Shroff, particularly, hark back to Dutt`s glory days.

A familiar soap opera kicks off with the story of Baldev Pratap Singh, played by Sanjay Dutt, who has married a widow (Manisha Koirala) to extend his political clout. Writer-director Deva Katta`s screenplay largely retains the original larger-than-life text of the Telugu "Prasthanam" with minor variations. Perhaps he should have done a drastic retell ? for the sake of an audience that is increasingly warming up to realism when it comes to Bollywood entertainment cinema.

The drama gets its share of twists, mostly in the later half after we have been introduced to the main players. Baldev prefers to trust his more sensible and intelligent step son (Ali Fazal) as his political heir over his own son (Satyajeet Dubey), who is a manic, hotblooded brat. However, the narrative fails to fruitfully utilise the conflict such a situation generates. The story meanders into hackneyed terrain.

In every way, this is a film that harks back to Sanjay Dutt`s heydays of the nineties ? perhaps that was always the intention, but the impact on presentday audiences could be far from effective. Just as most films of his younger days, too, it is left to the Deadly Dutt to salvage a mediocre show. He does not let down his fans.

From the point of his entry to the overtly maudlin finale, Sanjay Dutt is in vintage form. He executes Baldev Pratap with understated relish, often letting his eyes play out a gamut of emotions from cold fury to gullible despair. Most of the prop cast suffers from poorly written roles and lack of adequate footage, and this includes the veterans Manisha Koirala (ironic, because the plot is woven around her) and Jackie Shroff. Chunky Pandey manages to add a dash of the sinister to his role as villain of the piece. Ali Fazal is good in a supporting act but Satyajeet Dubey, despite an overall impressive show, tends to slip into the occasional hamming mode.

Almost every other aspect that defines "Prassthanam" ? including Ravi Yadav`s cinematography and Ballu Saluja`s editing ? tends to work at setting up a deliberately loud idiom.

For that reason, this is your film if you love those old-fashioned, over-the-top melodrama-mayhem packages. There`s Sanjay Dutt, of course, if you are a diehard fan. He will guarantee your money`s worth.

Koo envisions presence in south, to set up development centre in this Telangana city