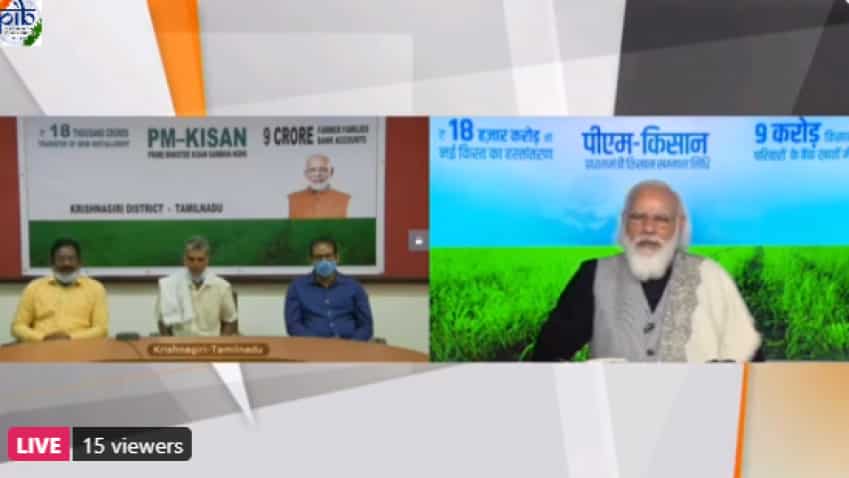 Modi released the instalment of Rs 2,000 to every farmer on the birth anniversary of former prime minister and BJP stalwart Atal Bihari Vajpayee, which is every year celebrated as "Good Governance Day" by the ruling party. Source: PIB
Reported By: PTI
RELATED NEWS

1:29pm: We have done extremely well in dairy sector: "We are the biggest milk producer in the world."

1:22pm: Today, every farmer knows where he will get the best price for his farm produce, said PM

Today, every farmer knows where he will get the best price for his farm produce. With these farm reforms, farmers can sell their produce to anyone anywhere. What is wrong if the farmers are being benefitted?: PM Modi addresses farmers pic.twitter.com/MRB0sP8kis

1:15 pm:Farm reforms became necessary because poor farmers, who are over 80%, were getting poorer during rules of earlier governments,said PM- PTI

1:10 pm: We have imlemented long-pending farm laws as per Swaminathan report. We are making record purchase on MSP.

1:02 pm: Talking about Congress governments in Punjab and Kerala and ongoing farmers protest, PM Modi said Congress is instigating farmers and following double standards in both the state as far as farmig rules are concerned.

1:00 pm Narendra Modi said lies are being spread that under new farm laws, farmers will lose their land. "Same people who are sitting in support of farmers protest today, are the ones who send farmers to jail in the name of protecting the environment if they happen to hurt wild animals in saving their crop,” the prime minister says.He said that some political parties are “pushing a political agenda” by opposing the new farm laws, reports PTI.

12:59 pm: PM Modi lashes out at West Bengal govt for not letting over 70 lakh state farmers benefit from Centre's direct money transfer scheme."I feel sorry for farmers of West Bengal where farmers are suffering because of the the state government political agenda." he said.

12:55pm:  "Pradhan Mantri Kisan Samman Nidhi is a an example of good governance. Rs 18,000 crore was transferred directly into the accounts of farmers. This scheme has ensured, there is no leakage, no middlemen and money is credited without any hiccup. So far, since the scheme was launched, the government has relased around RS 1,10,000 crore for the farmers of the country," said PM Modi.

Today, more than Rs 18,000 crores have been directly deposited in the accounts of farmers; no middlemen, no commissions: PM Narendra Modi addresses farmers pic.twitter.com/wXA1HweLqH

With the push of a button, Modi enabled the transfer of money at an event which the ruling BJP has made into a mega exercise to reach out to farmers by having its leaders interact with the farming community at more than 19,000 venues across the country and also listen to the prime minister's address.

Modi released the instalment of Rs 2,000 to every farmer on the birth anniversary of former prime minister and BJP stalwart Atal Bihari Vajpayee, which is every year celebrated as "Good Governance Day" by the ruling party.

Under the PM-KISAN scheme, a financial benefit of Rs 6,000 per year is provided to small and marginal farmers, payable in three equal instalments of Rs 2,000 each. The fund is transferred directly to the bank accounts of the beneficiaries.

The programme comes amid protests by various farmer unions against three farm laws recently enacted by the Modi government.
The government has insisted that these reforms are in the interest of farmers.