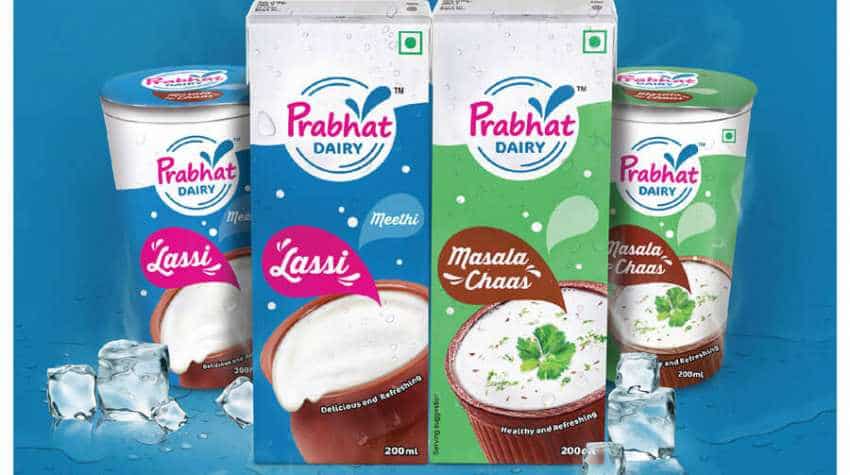 Prabhat Dairy share prices have plunged massively and thereby sent shock waves in the investor community. What was the reason for this? Investors seem to have lost faith in Prabhat Dairy after the company said it will sell 99% of its business to France’s Groupe Lactalis. The bloodbath in Prabhat Dairy is such that the company has lost over 55% of its market price and that too in just 2 days' time. The dramatic headlong plunge in Prabhat Dairy seems to be just a beginning as many fear the company's performance going forward may be affected.

At around 12:13 hours, Prabhat Dairy stock price was trading at Rs 76.35 per piece down by 4.26% on BSE. However, the company has dropped by over 12% in today’s trading session after touching an intraday low of Rs 70.15 per piece. Reason behind this nosedive is Prabhat Dairy informing exchanges on January 21 that their board members have approved sale of the company’s shareholding in its wholly-owned subsidiary Sunfresh Agro industries Private Limited (“SAIPL”) to Tirumala Milk Products Private Limited which is an Indian subsidiary of Groupe Lactalis.

Talking about Prabhat, Dhiraj Mistry and Ashit Desai  analysts at Emkay said, “Prabhat Dairy’s sale of the dairy business to Groupe Lactalis appears to be negative for minority shareholders, given the company’s exit from its main dairy business and its plans to use the cash proceeds from the transaction to invest in the expansion of its insignificant animal nutrition business.”

Transaction value for sale of SAIPL is considered at Rs 1,227.18 crore.

This was not it, Prabhat Dairy also plans to exit from its dairy business together with all specified tangible and intangible assets contracts, rights, personnel and employees, data and records, inventory and other assets and liabilities to Tirumala Dairy for a total consideration of Rs 472.81 crore.

Taking into consideration both SAIPL stake sale and dairy business sale - the overall valuation for this merger would come around Rs 1,700 crore.

When the news was announced, investors showed positive attitude towards Prabhat Dairy shares and it rocketted nearly 18% in early trading on  January 22 as it touched Rs 108.85 intraday high. However, this glory was only short lived, as a new buzz took a toll on investors and their positive sentiment on Prabhat Dairy evaporated. This buzz was concerning shareholders who will be selling their stake to the French company.

Prabhat dairy is owned by Sarangdhar Nirmal and family. Together they have 50.1% holding and remaining is held by public shareholders. Meanwhile, in SAIPL, Prabhat’s stake stands at just 29.1% while remaining 71.1% is held by Cheese Land Agro. Hence, during the stake sale, as per reports Prabhat is seen receiving Rs 508.3 crore from total Rs 1,700 crore - which is 29.1% of its holding.

Due to the buzz, within few hours of Tuesday’s trading session the gains turned into bitter losses, as by end of the day the stock of Prabhat finished lower by 27% to Rs 79.75 per piece on BSE.

However, Prabhat clarified on the same day saying, “The Company will evaluate all potential options available to return capital to shareholders of the Company in the most optimal manner, subject to applicable laws and requisite approvals, after closing of the Transaction.” Looks like investors are not convinced even with this as they continue to beat Prabhat Dairy stock.

With this, Prabhat Dairy share price has nosedived massively by over 55% in just two days.

After this transaction, as per Emkay, Prabhat will be left with its insignificant animal nutrition and genetics business (1% of the FY18 sales) that has recently entered into a tied-up with DLG, a Denmark-based company.

The duo said, “Given the company’s exit from its core business (~99% of revenues), we are suspending our coverage on Prabhat Dairy.”

Post exit from dairy business, Prabhat intends to further develop its cattle feed business in various parts of the country, and expand into allied businesses such as animal nutrition and animal genetics.

Hence, an exit from business and the uncertainties engendered thereof, are the major causes of concern for Prabhat Dairy investors!

Stocks in Focus on January 23: Prabhat Dairy, Va Tech to Jet Airways; here are the 5 newsmakers of the day

Stocks in Focus on January 22: Prabhat Dairy, JP Associates to Dena Bank; here are the 5 newsmakers of the day