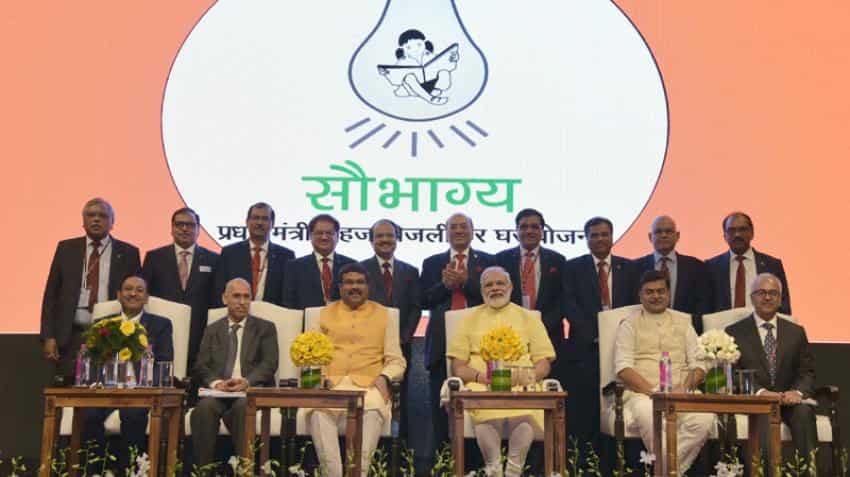 Narendra Modi with the Board of Directors of ONGC & ONGC Videsh Ltd, at a function, at Deendayal Urja Bhawan, in New Delhi on September 25, 2017. Photo: PIB
Written By: ZeeBiz WebTeam
RELATED NEWS

Prime Minister Narendra Modi on Monday had launched "Saubhagya- Sahaj Bijli Har Ghar Yojna" on the ocassion of birth anniversary of Pandit Deendayal Upadhyaya, with an idea to provide electricity in all households across the country.

Icra in its research report said that this Rs 16,000 crore project will be positive for the power sector as the implementation is likely to improve the energy demand. Moroever, it is likely to benefit for the capital goods industry, especially players in the distribution segment.

Sabyasachi Majumdar, Senior Vice President & Group Head, Icra Ratings said, “The launch of Saubhagya scheme shows a thrust on rural electrification. If implemented in a time-bound manner, this is likely to result in a boost in energy demand, apart from improving the quality of life for rural households."

Further, the report said that the demand growth from the relatively high tariff industrial and commercial segments will remain critical for the overall demand growth and viability of discoms.

"While the energy demand growth in 5M FY2018 has shown some improvement (an increase of 5.4% on y.o.y basis), a sustained demand recovery still remains to be seen," Majumdar added.

According to the official statement, the government will spent Rs 16,320 crore on this scheme and the  government’s budgetary assistance is Rs 12,320 crore. For rural household, the outlay will be Rs 14,025 crore and Rs 2295 crore for urban households.

Further, 60% of the scheme will be funded via government grants, with states contributing 10% and the rest amount will be covered by loans. Under special category states, the government will grant 85% of the outlay and the states will contribute 5%.

The Rural Electrification Corporation Limited (REC) is the nodal agency for the operationalisation of the scheme throughout the country.