The impact of poll trends was also witnessed in the country's stock markets as key indices on Monday went up substantially indicated a victory for the BJP in both Gujarat and Himachal Pradesh Assembly elections. 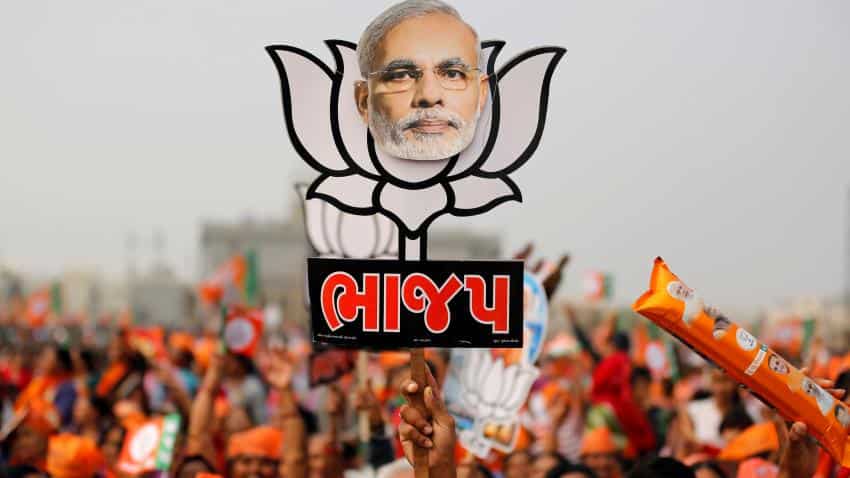 A supporter holds up a cut-out of lotus, the election symbol of India's ruling BJP, with an image of PM Modi during a campaign meeting. Image source: Reuters
Written By: ZeeBiz WebTeam
RELATED NEWS

Despite early hiccups in poll trends of Gujarat, the Bharatiya Janata Party (BJP) on Monday seems to be retaining power in the crucial state, besides heading for a victory in Himachal Pradesh, if we look at counting trends available for majority of seats in both the states.

This confidence was exhibited by Prime Minister Narendra flashing a victory sign when he arrived in Parliament to attend the winter session.

Union Home Minister Rajnath Singh too said, "We will get majority in both the states and form government," while adding "It is an approval of the government."

According to reports, the BJP, seeking a sixth straight term, was ahead in 100 seats while the opposition Congress is leading in 70 seats. The Election Commission(EC) trends were available for 175 of the 182 seats at stake showed.

It may be notd that in the 2012 Assembly elections, the BJP had won 115 seats while the Congress could win 61 seats. The BJP has been in power in the state since 1995, winning consecutive elections in the home state of Modi and BJP chief Amit Shah.

The elections for 182-seat Assembly were held on December 9 and 14, after an acrimonious campaign, which was dominated by a face-off between Prime Minister Narendra Modi and Congress president Rahul Gandhi.

However in Himachal Pradesh, the BJP is inching closer to win majority seats. The party was ahead in 37 seats while the ruling Congress is leading in 22, as per the early Election Commission trends available for 62 of the 68 seats.

The hill state witnessed a record 75.28 per cent turnout. The Congress and the BJP had 36 and 26 seats respectively in the outgoing House.

Meanwhile, BJP supporters started celebrating in Ahmedabad and Gandhinagar even though some of its leaders were trailing to the Congress candidates.

Reports said that Chief Minister Vijay Rupani too trailed at one time in Rajkot West but managed to reverse the situation after a while and ultimately won.

As the reports came in that BJP crossed the half-way mark of 92, the party leaders heaved a sigh of relief. But the trends were different from the exit poll predictions of a sweeping win for the BJP. BJP President Amit Shah too had repeatedly stated that his party would win 150 seats.

The Congress celebrations were shortlived as the trends reversed. Earlier overjoyed Congress activists, expecting a victory, were seen celebrating.

Dalit leader Jignesh Mevani, with Congress backing, was leading by 6,900 votes as the counting progressed.

The impact of poll trends was also witnessed in the country's stock markets as key indices on Monday went up substantially indicated a victory for the BJP in both Gujarat and Himachal Pradesh Assembly elections.

When the markets opened, the S&P BSE Sensex and NSE Nifty took an early beating with an initial reports of a possible BJP defeat in Gujarat.

The Indian MNC headquartered in Ahmedabad, Gujarat climbed soon after live counting of election results revealed that the BJP were leading in Gujarat.