Raje, who also holds the finance portfolio, presented the budget for 2018-19 which envisage total outlay of Rs 1,07,865.40 crore on schemes and projects. 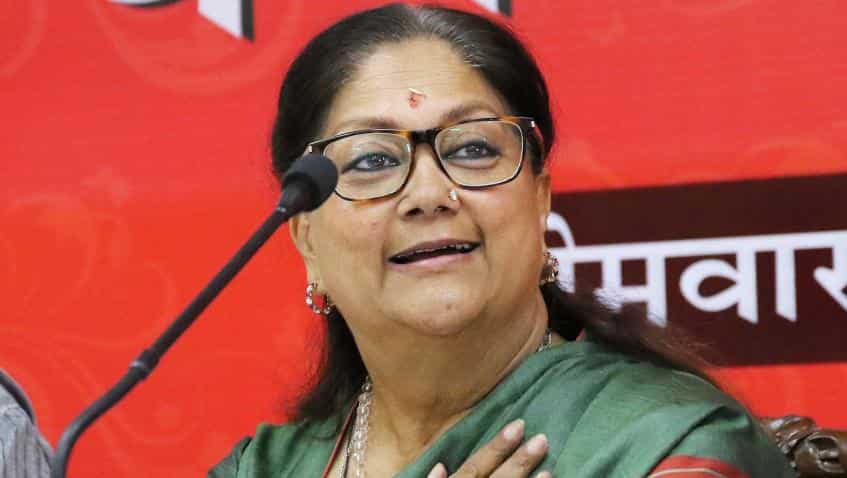 The state government has tried to touch every section of society including women, young, students, farmers and sectors like infrastructure, medical and healthcare, industries, education and others, the chief minister said.

Raje, who also holds the finance portfolio, presented the budget for 2018-19 which envisage total outlay of Rs 1,07,865.40 crore on schemes and projects.

A major share of the proposed outlay, 40.92 per cent, amounting to Rs 44,135.20 crore has been allocated to social and community services schemes as the state goes to polls this year. Power sector got 25.08 per cent while and rural development sector 13.42 per cent of the planned outlay.

The loan waiver would cost Rs 8,000crore to the exchequer.

After presenting the budget, Raje told reporters that the budget is well within the limits of the fiscal responsibility and budget management act.

"We have tried to touch every sector and section of society and have tried to make best use of the public money to support those deprived," Raje said.

In tax proposals, Raje announced to set up a traders welfare board with initial corpus of Rs 10 crore for speedy disposal of problems related to dealers, their social security and insurance needs etc., 50 per cent exemption in stamp duty for the establishment of IT, entertainment and tourism sector units, increase of ten per cent in SGST based investment subsidy from 30 per cent to 40 per cent.

To promote agro-based industries and services, the maximum limit of interest subsidy in a year increased from Rs 5 lakh to 7.5 lakh per year.

Raje in her budget speech informed the house that 1.81 lakh new taxpayers have been registered under the GST and the tax base of the state has increased by more than 35 per cent as compared to the VAT regime.

She also said that GST rates of commodities like marble and granite, gems and jewellery, handicraft, textile, hotel, tourism were reduced by the GST council due to efforts by the state government.