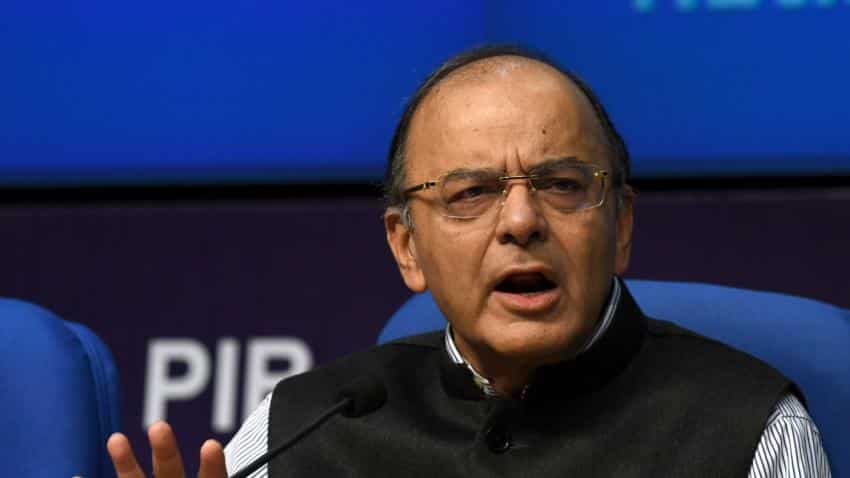 "Post demonetisation, no political party can accept donations in Rs 500 and Rs 1,000 notes since they were rendered illegal tenders. Any party doing so would be in violation of law," FM Arun Jaitley said in a statement. Image Source: IANS

In a bid to clear the air on tax exemption to political parties, Finance Minister Arun Jaitley said on Saturday they can not accept donations in old Rs 500 and Rs 1,000 notes since these bills were junked last month and clarified that there is no new exemption granted.

The conditional tax exemptions historically given to income of registered political parties continue and no new concession or exemption has been granted either post November 8 demonetisation announcement or in the last two-and-a-half years, he said.

"Post demonetisation, no political party can accept donations in Rs 500 and Rs 1,000 notes since they were rendered illegal tenders. Any party doing so would be in violation of law," he said in a statement.

He said just like anyone else, political parties can also deposit their cash held in the old currency in banks till December 30 "provided they can satisfactorily explain the source of income and their books of accounts reflect the entries prior to November 8".

"If there is any discrepancy in the books or records of political parties, they are as liable to be questioned by the Income Tax authorities as is anyone else. They enjoy no immunity whatsoever," he said. "There is no question of sparing anyone, and the political class is no exception."

Political parties have not been granted any exemption post demonetisation and introduction of Taxation Laws (Second Amendment) Act, 2016 which came into force on December 15, 2016," he said.

Under the Income Tax Act, income of political parties is exempt from tax subject to condition that all donations above Rs 20,000 are taken through cheque and lower ones are properly documented with full detail of donors.

These accounts also have to be audited.

"Under Section 13A of IT Act 1961, political parties have to submit audited accounts, income and expenditure details and balance sheets," Jaitley said.

In Mumbai, he told reporters that "the legal and taxation regimes for all registered political parties remain as they were 20-25 years ago. Our government has not made any changes to these rules, nor we are planning to make any".

"Nothing has been done, whatever was the existing system which has existed for the last 15 years is continuing and if somebody creates a political party for the purpose of channelising funds... Obviously law will step in," Jaitley said.

"Income and donations of political parties fall in the purview of Section 13A of the Income Tax Act 1961 and there is no change in its provisions. In this era of instant outrage, a 35-year old law is presented as a new law being passed by the NDA government," Jaitley said in the statement.

"I implore all journalist friends to be fully outraged against any step of the government, if it is not against corruption. But in equal measure, I would also implore them to do adequate research before jumping the gun," he added.

"There is no question of sparing anyone, and the political class is no exception. In fact PM Modi is setting a new example of propriety in public life, by asking all MPs and MLAs of BJP to submit their bank account details post demonetisation. We would like to urge the other parties to do the same and prove their intentions against corruption," the Finance Minister said.

Earlier, the Finance Ministry in a statement said, "Newspaper reports seem to wrongly suggest that there cannot be any scrutiny of Income Tax returns of political parties in the context of deposits of old currency notes."

"This inference seems to have been drawn because of the fact that income of political parties is exempt from tax under Section 13A. The exemption is given to only registered political parties subject to certain conditions, including keeping and maintaining books of accounts and other documents as would enable the assessing officer to deduce its income therefrom," the statement said on Saturday evening.

The statement also said the accounts of each political party will be audited by a chartered accountant and the party has to submit a report to the Election Commission about the donations received within a time-frame prescribed.

Revenue Secretary Hasmukh Adhia also said earlier on Saturday that no political party enjoys "any immunity" and all are liable to be questioned like anyone else by the tax authorities.

"All reports on the alleged privilege to political parties are false and misleading. Political parties have not been granted any exemption or privilege, post demonetisation and introduction of Taxation Amendment Act, 2016," he said in a series of tweets.

"Post-demonetisation, no political party can accept donations in Rs 500 and Rs 1,000 notes since they were rendered illegal tenders. If there is any discrepancy, political parties are as liable to be questioned by IT authorities as is anyone else. They enjoy no immunity," he added.

Meanwhile, Jaitley, addressing an SBI-BSNL function earlier in Mumbai on Saturday, said "the impression was that only those with smart phones can use e-wallets. But the fact was that even the low-cost mobiles that the vast majority of people use can have such facility."

Defending demonetisation, he said when one deals in a lot of paper currency outside the banking system, there is a high tendency to be tax non-compliant.

"Having dealt with such large volumes of paper currencies in all these decades, we lived through a phase where tax non-compliance was not considered to be improper or immoral. Some considered it to be smart. I must say that the country by and large has welcomed the demonetisation and reacted in a very positive manner," the Minister said.

Five ideas for tax saving if you have deposited idle cash