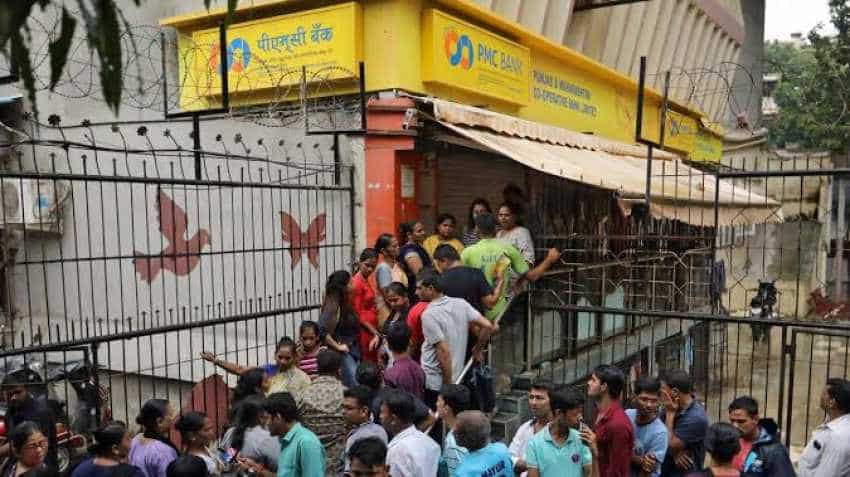 Forensic audit underway in PMC Bank and that it is closely monitoring the situation and has already given inputs for the proposed amendments in the Cooperative Societies Act to the Finance Ministry, Photo: Reuters
Written By: IANS
RELATED NEWS

RBI Governor Shaktikanta Das on Thursday said there is a forensic audit underway in PMC Bank and that it is closely monitoring the situation and has already given inputs for the proposed amendments in the Cooperative Societies Act to the Finance Ministry to strengthen regulatory control over such banks.

"We are providing inputs to the government for legislative changes in the Act (Cooperative Societies Act). The government will decide on the final amendment," Das said after a meeting of the Financial Stability and Development Council (FSDC) here.

In the FSDC meeting chaired by the Finance Minister, PMC Bank issues were discussed.

The FSDC is chaired by the Finance Minister and is a body of financial regulators such as SEBI, IBBI, CCI PFRDA, IRDAI. It met on Thursday where NBFC liquidity, commercial banks` credit offtake, PMC Bank situation and macro data of the economy were also taken up.

Das said RBI is in touch with various investigating agencies on the realisable value of the assets which were securitized by the PMC Bank. The realisable value or actual market values of assets are also being assessed. These assets are spread over various parts of Maharashtra and some in other parts. Agencies have been appointed and the valuation process is going on. We are checking if these assets have been sold to anyone or if there have multiple owners.

Once a marquee bank, Punjab & Maharashtra Cooperative Bank is now scam-tainted. It was among the top 10 urban cooperative banks in the country, but after fund diversions were disclosed, it was placed under an RBI administrator on September 23 for six months due to massive under-reporting of fictitious loans.

The RBI had imposed withdrawal restrictions on account-holders after it found alleged irregularities to the tune of Rs 4,355 crore due to diversion of money to infrastructure firm HDIL. After much dissent by the depositors, on Tuesday, the apex bank enhanced the cash withdrawal limit to Rs 50,000 per account, which was the fourth such increase since PMC Bank was placed under its direct control.

SO far five persons, including HDIL promoters Rakesh and Sarang Wadhwan, have been arrested by the police in the case. Several protests have been held by the depositors in Mumbai and at least 10 depositors have died since the alleged scam came to light fearing loss of their hard earned. Sporadic protests have taken place in front of the RBI main office in Delhi as well.

On NBFCs, Das said, "We have a good sense of what`s happening in this sector. The overall CRAR requirement of NBFCs is 15%. The sectoral NBFCs CRAR is 19.3%.

Capital to Risk (Weighted) Assets Ratio (CRAR) is also known as Capital Adequacy Ratio, the ratio of a bank`s capital to its risk. The banking regulators track a bank`s CAR to ensure that the bank can absorb a reasonable amount of loss and complies with statutory capital requirements.