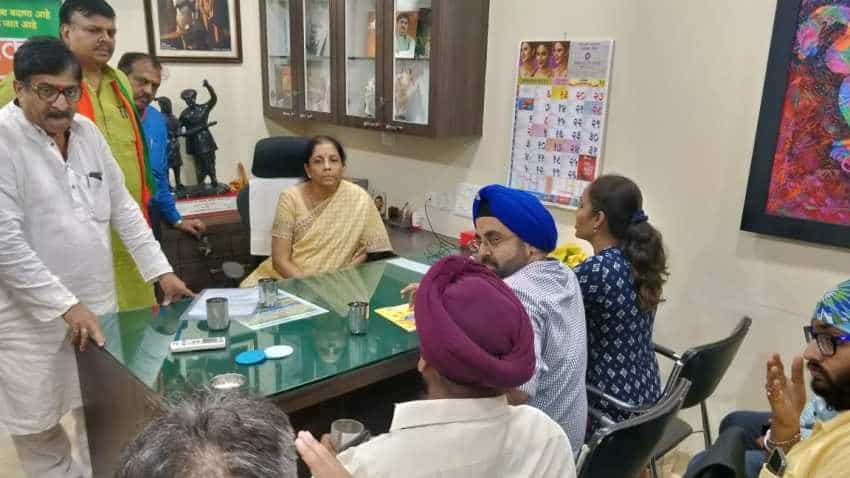 PMC Bank crisis: The FinMin Secretary will study in detail about what is happening on the PMC Bank case now. Image source: Twitter/FinMin
Written By: ZeeBiz WebTeam
Edited By: Prashant Singh
RELATED NEWS

PMC Bank crisis: Union Finance Minister Nirmala Sitharaman today met customers of Punjab & Maharashtra Co-operative (PMC) Bank in Mumbai, and assured them that she will speak to the RBI governor on urgent basis to address their concerns. The finance minister said that if legislations would help curb malpractices and in better regulating cooperative banks, the government would look into it.

Sitharaman said that she has asked the secretaries of the finance ministry to work with the Ministry of Rural Development and the Ministry of Urban Development, adding that the FinMin Secretary will study in detail about what is happening on the PMC Bank case now.

Notably, the PMC Bank crisis has sparked renewed concerns about India's banking sector. Currently, the RBI has taken charge of PMC, one of India's top five co-operative lenders with more than 900,000 depositors, and has barred the bank from renewing or granting any loans or making investments without its prior approval.

The PMC depositors have been allowed only to withdraw a maximum of Rs25,000 from their PMC accounts over the next six months. The angry account holders today staged a protest outside the BJP office in Mumbai, against the restrictions imposed on PMC Bank.

Currently, the RBI has appointed an officer to investigate the matter and a case has also been registered in the Economic Offenses Wing of the Mumbai Police.

Earlier on Monday, the Mumbai Police arrested Joy Thomas, the former managing director of Punjab and Maharashtra Co-operative Bank (PMC), which has been accused of creating fictitious accounts to hide loans. Under the RBI radar, there are over two dozen co-operative banks but PMC Bank, with deposits of Rs 11,620 crore as of March 31, is so far the largest.