Indu Bhushan, CEO, Ayushman Bharat Scheme, said Prime Minister Narendra Modi is the person who will decide the final date to roll-out the  Ayushman Bharat. However, he added that, w"We are trying our best to keep ourselves ready for August 15, 2018 date". 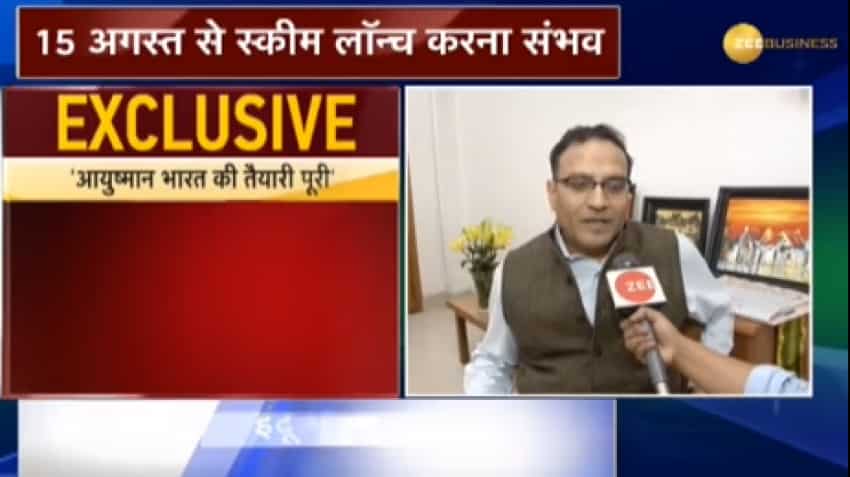 Indu Bhushan, CEO, Ayushman Bharat Scheme, in an exclusive interview with Zee Business's Suman Agarwal said Prime Minister Narendra Modi is the person who will decide the final date to roll-out the  Ayushman Bharat. However, he added that, w"We are trying our best to keep ourselves ready for August 15, 2018 date". He added, "I feel that private hospitals would like to be a part of the scheme considering its size, but we will like to take only those hospitals whose quality of treatment is good. For this purpose, we have issued a detailed guideline that indicates the kind of hospitals that will be taken under the scheme."  here are edited excerpts:

Q: There was talk earlier that the Ayushman Bharat Scheme launch has been pre-poned from October 2, 2018, to August 15, 2018. Can you please tell us the exact date on which the world's largest health scheme will be rolled out?
A: Even we are not aware of the date from which it will be launched. But, we are trying our best to keep ourselves ready from August 15 itself. As you are aware of the fact that this is a scheme of Prime Minister Narendra Modi and he is the person who will be deciding the launch date.

Q: Insurance companies are saying that the premium of the scheme is to low. What do you say about it? Will there be any change in it?
A: As you earlier said that it is going to be the largest health scheme in the world and we are doing it for the first time, so we are not aware of the kind of premium that will come. I feel, even the insurance companies are not aware of the same. The scheme is going to cover about 50 crore people or you can say 10 crore families in the country. Thus, the market to be covered under the scheme is going to be very large, which means it is going to be a case of scalable economy. Seeing the market size that is to be covered, I believe that the premium of the scheme should be very low. But we haven't made any decision on the premium that should be charged at the national level yet. The premium at the national level will be decided on the basis of the open bidding of the scheme.

If there is any concern related to premium then I would like to inform them that there is no foundation behind the thought as we have not decided any premium till date.

In addition, I believe that rates that we have decided on the national level are very good. Beside this, we have also empowered states to decide and change the rates at their level. I believe the scheme is a cause that every private hospital would like to participate in.

Q: What if the hospitals don't agree to join the scheme or trouble the patients by imposing additional bills. Is there any provision for taking action against such hospitals? Is there any authority a patient can approach to register complaints?
A: We will not tolerate such an act of hospitals where additional bills will be imposed on patients before or after being treated. There are several provisions to penalise the hospitals and we will be issuing a warning notice against it. They will be de-empanelled if the mistake is repeated after a notice is issued against it. Serious action will be taken against those who indulge in frauds.

Q: It was reported that, if required, government may bring a law or act to enforce implementation of this scheme. Will that happen?
A: Right now, we have not thought about it. We will be learning many things after scheme is rolled out. We will look forward to bring any law or guidelines, if needed, to rectify the scheme.

Q: Twenty states have signed MoUs with the government to implement the scheme. Can you let us know about the kind of models that will be rolled out by them while implementing the scheme?
A: MoUs were signed with 20 states, which include big states like Uttar Pradesh, Bihar, Jharkhand, Madhya Pradesh, among others. Apart from this, I feel that 10 more states will come on board in next two weeks. MoUs are the first step and now the states will have to work a lot to implement the scheme.
You also asked about the kind of models that will be adopted by these states. I would like to inform you that 12 states will go for the insurance model, under which they will be hiring an insurance agency that will responsible for management of benefits of the scheme. Other 12 states are keen on adopting a trust model, under which a society will be created. This society will be responsible for paying the bills for treatment. Rest of the states will opt for a mixed model under which there will be an insurance agency as well as a trust. For example, bills under Rs 50,000 will be paid by the insurance company and for anything above it may opt for trust-based payment

Q:  Can you name the IT company that is developing the database that will be created under the scheme? Will it continue to handle the database?
A: National Informatics Centre (NIC) is developing the database and we haven't hired an IT company for the purpose. But, when it comes to IT platform then we are using the IT platform of Telangana government and customizing it for the whole country. For this purpose, we have signed an MoU with Telangana government. And Telangana government is taking the IT support from TCS, so TCS is indirectly supporting us in customizing the model. It will be solely responsible for customizing the platform. After which, we will go for bidding to find a permanent long time support agency to manage the platform. But, it will be done through an open tender, which will be out in next four months.